World's largest emerald up for auction in kelowna

World’s Largest Emerald Up For Auction In Kelowna - 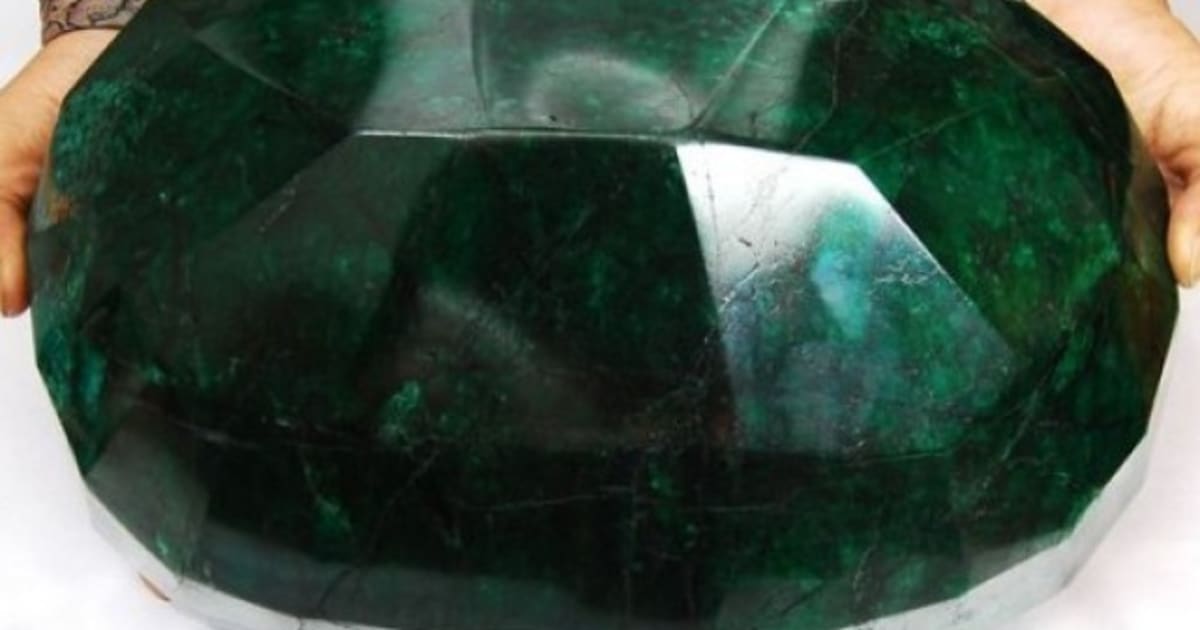 World's Largest Emerald Up For Auction In Kelowna (VIDEO)

The world's largest emerald will be sold to the highest bidder at a Kelowna, B.C., auction house later this month. The massive, 57,000-carat oval gem is a rough-cut opaque emerald, weighs 11.5 kilogr...

Who knows where it was found: Carnaeba, Bahia - Brazil?

Ooh, that was frustrating! I can see the emerald is pretty huge, but
I couldn’t judge quite how big. I was hoping the owner would come
into shot and stand by it, or pick it up, just for a sense of scale.

Mined in Brazil, cut in India

then try these links:

World's largest cut emerald to be auctioned in Kelowna 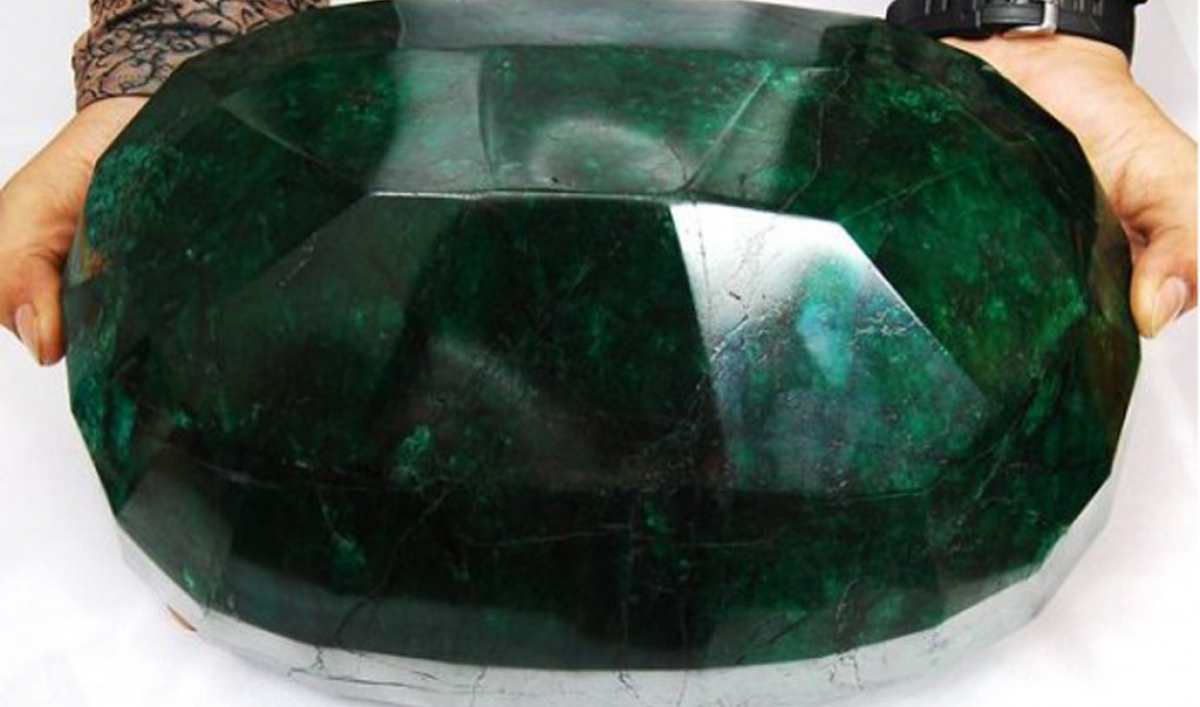 World’s largest emerald up for auction

Personally, though, my first impression was that though huge, that
sucker is just plain butt ugly. A waste of what might have been
really nice carving material. The cutting? Those are fake facets,
clearly cut on simple cabochon type machinery, as none of them even
seem close to being flat or well positioned. I think the whole stone
would have been prettier cut as at least a cabochon, or much better,
as a nice carving, not this fake attempt at facets on a stone too
opaque to make any decent optical use of facetting, or to be used for
any reasonable purpose as a facetted stone other than perhaps some
forhead jewel in some large stone statue or something… They’re
saying it might be worth over a million? I’ll be surprised if it
finds a buyer for much more than a quarter of that, if even at all.
Myself, I’d be hard pressed to give em a hundred bucks for the
thing, as is. Nicely carved, though, which would be much more
appropriate for it’s size in any case, and could have taken maximum
advantage of the material and it’s various flaws and good spots, then
it would be worth much more, at least in my eyes. But what do I
know…

Just my own 2 cents…
Peter

It is VERY BIG

take a look at

I think it was found in Brazil. It seems to have a lot of pits and
cracks on the surface and is that black line a small fault filled in
with another mineral? How much would you pay for it?

I have a picture of it with hands in the frame if anyone is
interested. 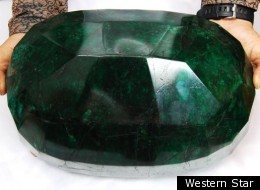 I wouldn’t pay 10c for it. And I certainly don’t want to set it.

I hate to come across like a spoil-sport but I personally wouldn’t
value the emerald anywhere near what they are claiming it is worth. I
also very much doubt it is the worlds largest. I have seen many very
large emeralds cut from very low clarity rough. Sure none with my own
eyes as big as this one but I am familiar with the material it is
cut from & in parts of South America it is commonly used as garden
decoration as the clarity is not considered even close to gem quality.
That type of rough has become more saleable recently due to what I
call “the hippy factor”. Lower quality gems being put into STG
jewellery for sale in markets or at fringe festival events because of
its claimed healing properties. A top New York or London jeweller
wouldn’t have it in their window. I’ve had several pieces myself
weighing in the hundreds of carats that I’ve gifted to some of my
better customers for use as paperweights.

Just as diamond is mined in grades from flawless through to below
industrial quality. This type of rough would be equivalent to the
muddy brown industrial quality diamonds used on drill bits & hole
saws.

Of the four Emeralds I can think of immediately also claimed to be
the worlds largest one is currently being held by the LAPD the last
time I heard anything about it. It’s ownership is under dispute as
it’s sale interrupted by Hurricane Katrina and it disappeared for a
while only to show up in Las Vegas. It’s reported the gem & its
granite base weighs in at over 850 pounds. Again it’s not of high gem
quality. Do a search for the Bahia Emerald and you’ll find many
articles about it. It’s claimed to be worth in excess of US$400
million. The claimed values of these two stones are hyped beyond the
ridiculous in my opinion to suit the owners (disputed or otherwise)
intention to sell at the highest possible cost.

I’d pay nothing, I couldn’t use it.

I read one article that says it is watermelon size. Maybe it will
make a belt buckle for Paul Bunyan.

What I’d like to know is who faceted that stone and how did they do
it?

The Emerald is supposed to weigh 57,000 carots, (pun intended) the
pictures that I have seen do seem to indicate that the stone is of
rather poor quality and would have been more suited to a sculpture,
as is, maybe a paper weight… ultimate bling???

How about carving it into a garden gnome for the fishpond at Premier
Christy Clark’s Legislative Buildings?

Looks to me like they used a right angle grinder.

Some would say the faceting is almost fatuous (unless the facets are
especially aesthetic) Who is going to wear it in a ring? King Kong?

How would you add maximum value to a watermelon-sized stone through
sculpting and enameling/surface materials? If a latter-day
Michaelangelo were to carve it into a garden gnome, would that do
the job?

First, stop thinking about enameling stones. Cute idea, but not
normally done nor practical nor needed. The stone is capable of being
very beautiful all on it’s own. No need to cover it up with paint or
enamel. (and given the nature of emerald, any enamel used on this
would need to be resin or paint, as the emerald would never survive
the heat of a vitreous enamel being fired on.) The idea of carving
has to do with scale. That stone is simply not jewelry scale.
Instead, it’s scaled to an ornamental or functional object that might
sit on a table or in a showcase, or similar, much like many other
similar sized objects, table centerpieces, modest sized sculptures,
ornamental bowls or containers or the like.

There’s already a fine and existing market and tradition in precious
and semiprecious stone carving in items of this scale, so using the
emerald in this manner is using it in a way that’s consistent with
it’s scale, rather than trying to force it into some identity
(facetted gem, for example) for which it isn’t suited. To maximize
the value, the carving needs to be well designed and executed, with
subject matter chosen both to take full advantage of the features of
the rough material, as well as perhaps considering the types of
subject matter that the material’s identity might suggest, or which
the tastes of the marketplace might desire, or even better, if the
carver is a true creative artist ( many are), then producing a
sculpture with a new creative design, the artwork of the carver.
While it may be that there may be some artist out there who’s famed
for carving garden gnomes, I rather doubt he or she would use this
large emerald that way. But who knows. Depends on the thinking that
went into the design, and the skill in executing the carving. But I
can easily imagine some skilled carver in China or Hong Kong doing
wonderful things with this. Or perhaps one of the native carvers of
Alaska or the pacific northwest doing something with it, as they
already often do with a varied range of materials from soapstone to
jade. And there are many others out there who also are skilled
carvers with their own traditions or individual creative ideas who
could do much more with this chunk of emerald than merely trying to
fake an enormous facetted stone.