I have been struggling to make bezels…round and square. I was filing a mitered corner and my dog was begging to go out. I took him outside in the sunlit yard still obsessively filing my piece. I realized then, l have been working in the dark. I have 2 small talk lamps on my bench and a ceiling light 11 feet high above my bench. I literally can’t see. I am thinking of hiring an electrician to put a fluorescent light hanging on chains above my desk. Money is definitely a concern. Any suggestions would be appreciated.

led lights, can be hung on chains, and plugged in to an outlet so you don’t need an electrician.

as you need different light depending on what you are doing (soldering etc) , putting a pull cord on/off on each light is a good idea

I use many small spotlights in my studios (old medical exam lights) they work very well, can position the light exactly where I want it

suggest getting a magnifying lamp

Why a fluorescent lamp when a LED lamp would be easier to install? Also, you don’t need an electrician if you are handy. Use a good extension cord to get power to the lamp.

I replaced all of my old incandescent and fluorescent lights with 4’ LEDs and smaller spots. Makes a lot of difference. You can see firescale without going out into sunlight. Add a couple optivisors and you view of your work will be very different…Rob

I use two lamps in addition to room lighting. A long arm magnifying light over my main work area and a short arm LED lamp over a second area. Light directly over your work is important especially if (like me)you have a bit of age. I do western brightcut engraving so good light to me is essential. For that I focus the LED on my work. So you can get good lighting with lamps and no need for custom installation.

Right now I have a long arm high intensity lamp and a swing arm magnifier with an incandescent bulb in it on my bench and they give enough light for my boomstand microscope. I will eventually get around to putting a ringlight on the scope and perhaps I’ll also suspend a big LED tube over the bench. Lots of options and no real need for an electrician…royjohn

I’ve replaced most of my fluorescents with 4 ft. LEDs and there are two types out there. One uses white tubes, which look and work just like fluorescent lights. The other has clear tubes, such that you can see a row of dozens of small LED lights inside the tubes.

To me those are a curse. If you are working on shiny metal, which pretty much is our game, each individual LED leaves its own bright specular reflection on the piece. That interferes with seeing the surface of the metal as effectively as a broad, soft light would.

When you buy LED shop lights, the packaging generally does not say which type of tubes you will get.

I have used blue painter’s tape to attach sheets of tissue paper over the fixtures, which works well to even out the light to be a single, diffuse source, rather than dozens of bright hot spots.

Maybe it is just me, but I don’t think multiple points of LED lights works well with jewelry, and are best avoided.

Best light I ever had for up close bright work came about when I got pissed. I lost a small stone on the floor near my bench. None of the lights I had worked to find it. If it was bright enough, I still needed a bit of magnification. The flashlights that I had were all to cumbersome. I went to the local Ace hardware to look for a solution. 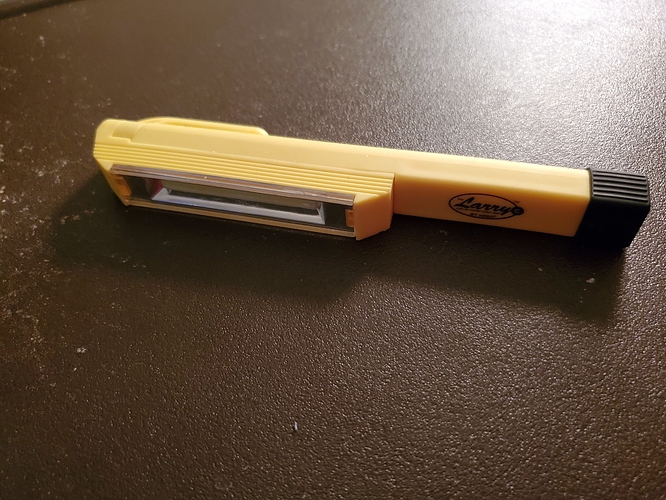 This little flashlight puts out 10K lumens. A bit of duct tape and it was attached to my visor. Poor man’s solution to a miners head light. It cost a whopping $6. When things need extra light and better vision, out comes the tape and this flashlight.

This costs more than $6 ($24.95 before Otto Frei’s usual discount) but it is very handy and works well!

Contrary to what I posted earlier, the 6 LEDs are not too much of a problem, probably due to the close working distance.

Otto Frei has (or had) another visor light with a single bulb in the center which I preferred, but it was not an LED, just a standard flashlight bulb (meaning it would burn out sooner than later), and the unit I received had a short in the light socket such that the light didn’t work and the batteries were getting very hot.

As Aggie said of her set-up, I use masking tape to hold the battery pack on, which makes a more secure fit than the velcro strap that comes with the light.

Hello,
About a month ago I saw 4 ft. LED shop lights in the Harbor Freight catalog and they were on sale. I bought two and hung them using the chains provided and plugged them in. Well! Why did I wait so long! Just an amazing difference. Do check the lumen rating and get the highest rating. BTW the lights have a pull chain switch, so no electrician is needed.

I can now see better than I could have imagined.

Judy in Kansas, where the humidity has dropped with a light northern breeze. Gonna sit in the shade on the patio and enjoy an adult beverage.

I needed a better bench lamp and as an experiment picked up a $20 LED lamp at Lowe’s. It has a clip at the bottom and about an 18” flexible neck. I can move it anywhere in my workshop and then twist it or turn it to get the light I want at any angle. I’ve been using it for three years now.

I purchased led fluorescent fixtures - and I can see so much better! I use a basement space for my studio - and light is always been an issue. I didn’t like the lights on magnification glasses - but I now place a reading light right next to where I work if needed. Much better.

I have one of those 4 ft LED shop lights over my main bench, with a gooseneck LED spot for extra light. Recently I upgraded the overhead fixture from a standard bedroomish one that really wasn’t contributing much, to a big flat disc with lots of LEDs. It made such a difference. The wax bench on the other side of the room gets that plus 2 adjustable task lights. All those years I spent working with inadequate light!

I use multiple clamp-on multi-joint spotlights with some 5000K “Daylight” 100W equivalent LED bulbs from Sylvania. They are extremely bright bulbs that do not buzz or create excessive heat and I can manipulate and relocate the lamps around my workspace. 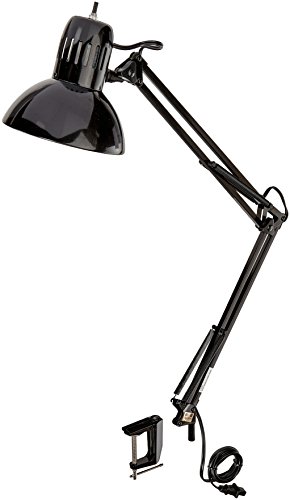 ADJUSTABLE: spring loaded arm is easily adjustable to direct the light wherever you need it the most. ON/OFF SWITCH: conveniently located at the top of the lamp shade for quick and easy use. VARIABLE MOUNTING: metal clamp means you can mount this... 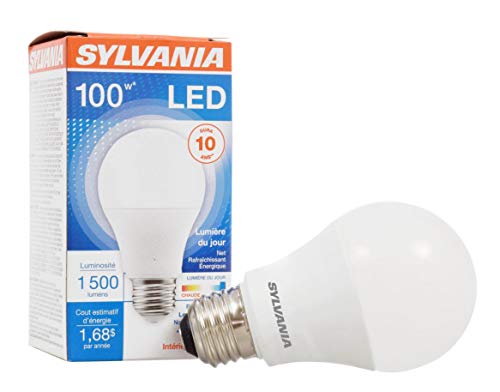 I’d be blind without my Stella. A bit pricey but worth it. I was amazed with what a difference it made in my life.

You can buy directly from the small company (great customer service btw) https://stellalighting.com or prices might be lower on Amazon or other ecommerce sites

They have a tabletop style, clamp on, and floor lamp 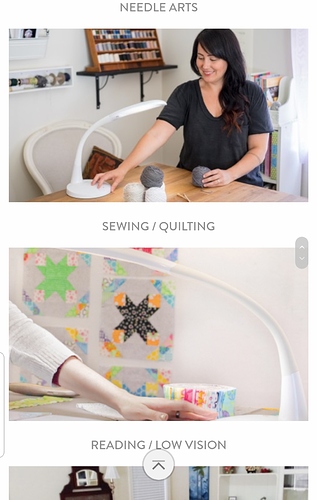 So glad to see this post - i have been agonising over choice of light for several months now.
Please can someone let me know if the magnified lamps (which seem to have less output) are a better choice than a brighter lamp. Eg Durston https://durston.com/product/durston-led-task-light-black-uk-plug/ v’s https://durston.com/product/led-large-magnifier-lamp-black-us-plug/
Currently im using a small flexible fluro but its inadequate as my eyes are not what they used to be!

4’ LED fixtures for general shop lighting and smaller LED spots for those places where you have to visually concentrate: polishing wheel, soldering bench, setting bench etc. At 71, my eyes appreciate my optivisors. Think about how you wire your shop. My shop is wired so that all the lights near my soldering bench can be turned off with one switch next to my right leg…Rob

I think either of these are excellent choices Stefanie. I am myopic (lifetime of computer work) so I have some sort of natural magnification from my eyes, but if you have trouble seeing small things, the magnifier is the way to go. At 1200 Lumen it is quite suitable. But now that 2000 Lumen lamp has caught my eye

I enjoy having the holy light of god shining upon my work!

Two work lights from Ikea (Tertial 9,90€) and 2100 lumen led bulbs from the supermarket. Total cost ~50 bucks and you will have light like never before! 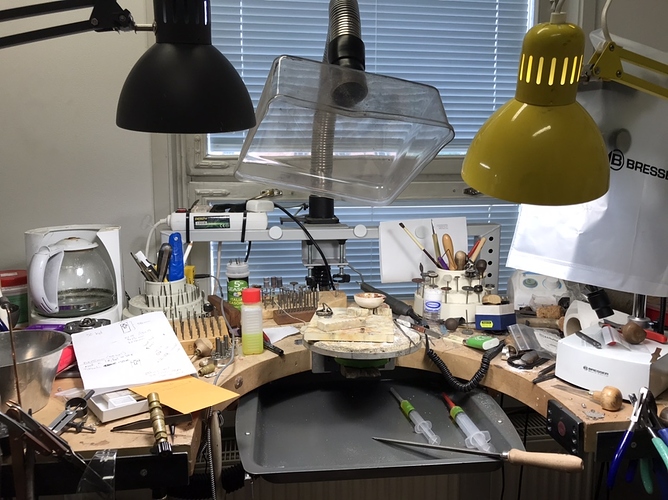