I’m new to the forums and hoping to return to doing some metalwork
after about 10 years away from it. I want to properly ventilate this
time, and my dad has offered some equipment he has in storage - a
squirrel cage fan from from a 100,000 BTU furnace and a standard
stove vent hood. He thinks he can rig this over my soldering area to
provide what’s likely to be more than enough ventilation for the
job. I have an electrician coming out for various projects, one of
which is running a separate circuit for this fan and some other
equipment.

Couple of questions - is it possible to have too much ventilation,
i.e. is this thing going to be a total wind tunnel and remove too
much heat while I’m soldering? I figure it’s more than I need, but
since it’s free, will it suffice? Also, I have tended to set up my
work area the way I was used to in class - with my great big
soldering bench being a separate area, rather than everything at the
work bench like I think most jewelers do. I read a post here a few
weeks ago where someone had made a ventilation device with a
squirrel cage fan that could be mounted and moved around the bench,
I’m assuming to accommodate polishing dust, as well. Since according
to the current plan, I’ll only have the one fan permanently mounted
over the soldering area, am I better off doing all my soldering and
polishing work right at my work bench and mounting the vent hood
there? Or does it need to be somehow right down on the bench? I
would assume the source of suction would have to be a lot close r to
the work when polishing than when soldering, with solid debris being
heavier? I suppose I could put the soldering bench next to the work
bench and just swivel around to solder, polish, and use the pickle
all in that area to take advantage of the vent hood. Just trying to
think this one through…

If anyone has advice on setup or the fan issue, that would be much
appreciated. If this fan is not the right one to be using, I"m not
sure what to purchase instead. I’ve seen other squirrel cage fans on
eBay, but not sure about how much power is needed to adequately pull
fumes and dust.

I have used the regular vent hood over the soldering area to great
satisfaction. it is at least eight feet from the work table and
doesn’t have a thing to do with where you concentrate your torches
heat. Don’t worry about that aspect of set-up. I do recommend your
workbench being separate from your soldering area for a number of
reasons. the soldering table can also house your pickle pot which you
don’t really want on your bench anyway…and since you go from torch
to pickle it’s only logical that they would be separated. you may
also consider the squirrel cage on a standard universal tool stand,
with casters that lock. then it can be moved around the shop, and
modified to suck particulate stuff away from you and into a
collection bin whilst polishing and /or grinding…There is a 39.00
stanley model on sale at most home centers that has 3 speeds and
pivots nicely and has two extra outlets for portability and
versatitlity. I urge you to go inspect its force. and if yours is
more forceful than the highest speed perhaps have Dad modify it to
move less cfm’s of air through your spaces. if its a reversible
motor, or he can rewire it to be reversible than it can be connected
to a length of dryer venting or corrugated plastic tubing and that
attached to a 13 or so gallon plastic trash can ( metal cans are too
noisy and have too many beads rolled to keep the dusts you want to
reclaim in grooves.) on one end and rig it to the back and underside
of your grinding, polishing table to collect precious metal dusts.
If you want to save assay charges have two lids and two cans, one for
silver,one for gold…if you’re wealthy have a third for
platinum!.the squirrel cage is a great thing to move air in a shop
provided it is as quiet as is possible. Otherwise studies have shown
people use it less than they would if they did not have to deal with
the noise most dust collecting systems create…

you probably don’t want to pull particles and dust past your face
anyway, so mounting the cage on a highly reconfigurable and mobile
stand is ideal…and a vent hood, chicken brooder hood, et, all work
great to pull solder fumes away from you. I had mine mounted into the
wall behind the soldering area though as opposed to directly over it,
for reasons from - it had lights built in that if left sans tube or
bulbs could create enough of a spark when turned on to set off
acetylene gasses that were mistakenly left on as you exited your
shop, and collected on the ceiling ( propane collects nearer the
floor being heavier than acetylene).and that I hate anything
directly mounted over my head…even a ceiling fan cannot be mounted
over my bed’s area (quirky-,idiosyncratic, I know !!!). And it pulls
the fumes directly past your face, which when wall mounted does not
happen…One of the local crafts schools has 8" fans mounted along the
back wall of the “soldering room”. theoretically the fans are placed
between each of four or six places equipped with smith torches, and
two or three pickle pots shared between those seated at the soldering
bench/table.consequently all the hoses lead to the side of the table
mounted tanks ( chained down of course!), and the fans are kept on
during the entire time the shop is operational to vent out fumes,
etc.

What you are proposing will work. Modifications for mobility, and
possibly to double as a dust collector ( which means cleaning out the
squirrel cages body more frequently) are equally reasonable…My major
recommendation is to separate your solder area from your bench area
and use a classic skin or other tray to catch metal you want to reuse
or send off for exchange, and DO NOT HAVE ANY SUCKING OR BLOWING
DEVICE CLOSE TO YOUR WORK…at least 6 feet above your work, more if
you can get away with it…Some building codes require things to be
four feet from the ceiling so check your local codes before voiding
your homeowners policy! and on that note, make sure your tank set-up
complies with code as well…If you are asking whether you should have
the vent hood directly above your work ( implying a couple of feet at
most) then I urge you to read, or re-read Tim McCreight’s" Complete
Metalsmith" and let DAD read it too. In it he covers studio set-up
and recommendations that are hard to argue with!and I think there is
even a copyable template that lets you play with moving the
components around so that you and dad are on the same page as to what
your needs and wants are in setting up a workspace…and while you are
modifying, you may want to install a wall safe or other safe to keep
precious metals and stones in if they are at all at risk of being
stolen once the neighbors ( if there are any) aren’t tempted to
relieve you of your stash without a little resistance at least!.

Some options on the squireel cage fan:

Common sense and thinking about this will help you to have a good
system and be safe. Take the blower into a good motor shop where they
rebuild motors and get an opinion on speed controling that fan, it is
probably your best option to use it.

Contact me off list if you have more questions, I realize I have
presented a lot of options.

Yes. Because all that air that is sucked out has to be replaced with
fresh air. Fresh, heated or air conditioned air.

Read Charles Lewton-Brain’s book Safety in the Jewelry Workshop,
which explains the basics of ventilation in a clear, easy to
understand way.

Most people want their polishing motor not on their bench because of
the mess, so I say you need two systems. Can you not buy a polishing
motor with ventilation?

Folks here have posted about a pre-assembled ventilation system, I
went looking for it but couldn’t find it.

The squirrel cage fan can be had from
http://www.sciplus.com

or places such as McMaster Carr.

There is one book on making ventilation systems, which is technical
and explains how many cubic whatevers of air you want to move an
hour, etc. I don’t recall the name, but there is only one.

Basically, if you have a lot of money, you can buy pre-fab. If you
don’t, it can be done quite cheaply but will require some research
and effort.

Sounds like you’ve got a pretty big fan, it should pull some big
CFMs. I might consider mounting the motor and fan away from your work
area…like near the outlet. Construct ductwork to two (or more)
major stations, the bench(put the inlet low and in front of you, to
pull the fumes away from your face, the stove hood won’t work for
this) and your buffing area(if you have a buffer with fan and filter
you could still have an inlet attached to the filter outlet).

You could build into the ducts adjustable bleed-off valves. If you
have too much suction at point A you just open the bleed off
vent(which you maybe could use outside air for this to save heating
and A/C costs. If you find that there is not enough suction to run
both work stations simultaneously you could shut down one station in
a similar manner.

Sounds complicated I know, but I had a similar setup years ago and
it worked pretty well. The longer your runs of duct the more
important it is to have staged duct sizes. for example 8" near the
fan stepping down to maybe 6 or 4 inch at the outlets or whatever is
appropriate for the CFM rating and the distance. For dust control
you’ll need smaller diameter ducts (but not too small) to keep a high
relative velocity so the particles remain in suspension.

Before investing in steel or aluminum ducts you might run a test of
your layout with flexible duct. Its cheaper and you could make
modifications easily enough to fine tune. I don’t know if the flex
duct will hold up long term.

Whew! my brain is tired now.

I suggest putting a rheostat switch on your fan. Works for me.

I was just trying to look up this you mentioned, but
it’s not in my book – the '91 revised version (still in print). I
looked on Amazon.com

and realized there is a 2002 professional
version. Heads up for those who don’t have “The Complete Metalsmith

”
yet! Get the expanded professional version, it’s only $8 more on
amazon – which is less expensive than buying BOTH versions, as I’ll
apparently be doing…

Thanks much,
C Rose 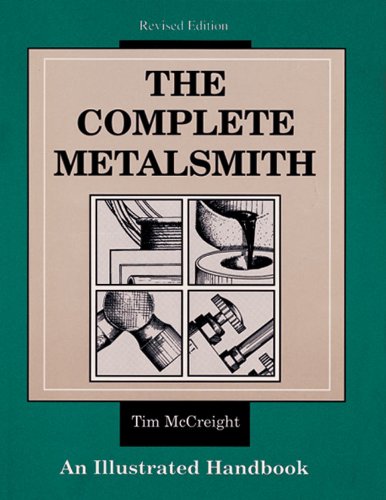 The Complete Metalsmith: An Illustrated Handbook