I’m trying to reuse some beautiful stones from an old necklace with
outdated settings. The metal looks to be some sort of brass mixture
and it won’t be a loss if it’s damaged. But the stones appear to have
been glued in place prior to the bezel being tightened in place. I
don’t want to pry on them and take the chance of damaging the stones.

Anyone have any suggestions on how to remove these or dissolved the
glue?

Boiling hot water will soften the glue. Then you can pry them out.
Good luck. Hopefully they are not foil/mirror back stones that wont
survive being removed.

I have used Acetone. I put the acetone in a safe vessel and let the
piece just soak in it. If it is glue this will usually dissolve any
kind of epoxy or super glue type.

FG’sS Don’t! It probably won’t soften the glue but more likely damage
the stones. Where doesn’t info like that come from?

Stuller and other suppliers sell a product called ATTACK. It’s
actually faster than acetone and safer than boiling the stones.
Boiling may cause thermal shock and cause some stones to crack. I
use a baby food jar and soak the item in the ATTACK. Use a lid
because it will evaporate quickly. Steve 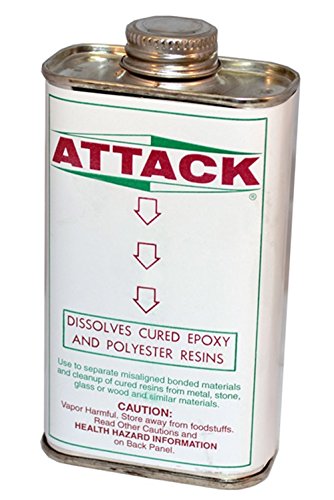 Attack is primarly Methyl Ethyl Ketone (MEK). It’s the preferred
solvent/remover for epoxy glues, which is it’s intended purpose (It’s
made by the same folks who make Epoxy 220 and Epoxy 330, I think…)

For super glues, (cyanoacrylates) acetone is usually stated as the
preferred solvent. While Attack will eventually work with super glues
too, it’s not faster or more effective than acetone on these types of
glue.

And while both solvents require decent ventillation, I’d say the
Attack fumes are worse for you than those of Acetone. Be more
vigilant with the ventillation.

Well, yes and no. Plunging room temperature stones into boiling
water can easily damage heat sensative stones (not all stones are
heat sensative, but those which are, wouldn’t like that shock). Same
thing with removing stones from boiling water and rinsing right away
in cold. This all is mostly common sense.

But just the temperature of boiling water? I can think of very few
materials that would be harmed by that at all. Amber, for example,
might well be. But stones immersed in warm water, and THEN heated to
boiling, and then not cooled rapidly in cold water, should generally
be fine.

Boiling water won’t always soften cyanoacrylates (super glues) all
that much, those sometimes it will. But most epoxies, get quite
pliable at those temps. Even if not noticably soft (after all, the
glue is in a joint, so you can’t feel it), it will have lost much or
most of it’s bond strength in boiling water, so joints are easily
seperated. But don’t let it cool again. If the epoxy, softened in
boiling water, cools again, it may well regain it’s original
strength. (though not always). So seperate the parts while still
hot.

As a Lapidary I use 5min Super Strength Epoxy exclusively as a dop.
I don’t like shellac or dop wax. So I have to use open flame or hot
water to loosen stones from dop sticks. Hint: don’t boil, but heat in
a pan of water. Start cold to prevent temperature shock.Let the water
and stones heat on Medium until the water forms slight bubbles and
gives off a bit of steam and test. If not loosened by now heat a bit
longer.

I’ve only ever damaged opal this way. The glue was still
sufficiently strong to pull off part of the stone on disconnect.
Similarly kyanite and emerald or any non-quartz stone with lots of
cracks may pull up leaving some material in the glue but if your
stones are solid, you shouldn’t have a problem. Don’t plunge them in
cold water to cool them after you heat them though. Let them air
cool.

Now I don’t know what stones you have, but if these stones are of
quartz or cryptocrystalline quartz (chalcedony) you shouldn’t have a
problem. However, if you do boil them accidentally, make sure its not
for very long. Colored quartz can loose it’s color. I turned smoky
quartz into rock crystal by leaving it on the stove.

Any but the most heat sensitive stones should be safe. Heat, do not
boil! I can’t say for sure, but you should be ok.

“Attack” works well, but it is not a safe product by any means. I
avoid it.

Personally, I have had no real issues with heating stones in water.
The opal I mentioned was a victim of impatience.

The vendor who introduced me to ATTACK offered this tip to retard
the evaporation: put a little water in the lidded jar with the
ATTACK. The water will float atop and prevent the otherwise rapid
evaporation.

It’s also the key ingredient in paint strippers. If you use a lot of
it you can buy technical dichloromethane considerably cheaper than
retail Attack. It’s by far the best solvent for cured epoxy resin -
also Ceramit, acrylics, plastic, paint and the vinyl tile on your
floor or your formica countertop.

Note the warnings about some carcinogen risk and the unproven risk
to pregnant women. Careful…

In the US, MEK is also available at most hardware & paint stores &
home centers.

If its brass they are likely not valuable stones. The solvent soak
as mentioned is good. If you like to live a little dangerously though
you could try touching a torch flame to back side of the mount. watch
the glue closely, as soon as the glue start to expand or change, pry
the stone out gently. Preferred method would be to use you fingers
figuring that if its still cool enough that it doesn’t HURT, you
likely won’t damage the stone.

But you should check what the stones are first. Plastic? outta luck.
Glass? OK usually. Mineral? be selective.

I use that method of releasing stones from the dop, too. However, I
let it boil. There’s no stone that’s going to be damaged by
gradually going to 212 F (100 C). For heat sensitive stones, the
cooling off should be gradual, as well, of course. Just turning off
the stove, then resisting temptation for half an hour works.

It’s important to choose one of the fast-cure epoxies, since the
stronger, slow-cure epoxies may have a higher softening point.

Thanks for the correction, John. Faulty memory circuits, perhaps
from breathing too much of that stuff… Not to mention not bothering
to go check the label on the can before spouting off somthing from
memory.

It’s been working fine for me with epoxy and that’s the only type of
adhesive that I use.

Thank you for clearing up a mystery for me. I recently made my mother
a necklace with a stone-set centre piece, but having the “chain” made
up of sardonyx and red fire agate beads threaded onto silver links. I
accidentally made it too short (I ran out of the right gauge of wire)
and so I decided to add an extension piece so that she could wear it
looser if desired. I cannot stand jump rings to be left unsoldered,
so I created a heat sink to protect the beads in the chain and
soldered on the extension piece. Unfortunately, the closest sardonyx
bead was too close to the heat source and almost completely lost its
colour - to my great surprise. I ended up having to cut it out,
reduce some thicker wire to make a replacement link with new sardonyx
bead and finish the necklace without the need for extra soldering
(which was obviously a better outcome in the end). But the colour
loss has been bothering me ever since and I’ve been meaning to ask
about it - so thanks.

Just FYI - chemistry has been renaming some of the old terms to be
more precise as to what they actually are (I have found recently). So
you may find the old name or the new one, but they’re the same thing
in practice.

Attack was methylene chloride – it has apparently been reformulated
(at least for California ??)

As far as I know it was never MEK

Methylene Chloride has been in most paint removers. ( still is?) it
was excellent as was for epoxy and polyester. it would also strip
IMRON a polyurethane.

It was (is ??) a suspected carcinogen.

I have breathed and bathed in a lot of it and am still her years
later with no apparent damage !!

Odd. I’ve boiled smoky quartz many times without changing its color.
I wouldn’t think there would be enough energy to reverse the effect
of the radiation.

Of course, I’m generally too impatient to let it boil more than a
couple of minutes.