I am photographing more of my work to update my website. Does anyone
know of a gradation background that does not scratch easily? Or is
there some way to coat the surface to keep it from scratching? My
varitone paper backgrounds are getting very scratched and before I
replace with the same I would like to find a better product.

I’ve been involved in small product photography for many years, and
have had many clients who prefer gradient backgrounds of one sort or
another.

I don’t know what you are using for your post-processing software,
but all of them offer some way to digitally create a gradient
background. The response I usually get when I mention that concerns
the supposed difficulty of masking out the background in the
original image so that it can be cleanly placed on the gradient (or
some other) background. Masking presents problems for many people.

I used to struggle with this, until I learned how to photograph
jewelry (or any other object) in such a way that there were no
shadows cast on the background, and the background was a different
color or tonality from the object being photographed. One simply
shoots on a piece of glass elevated above a background which is
brightly and separately lit. The resulting lack of shadows and
highly contrasting background makes masking a couple of easy mouse
clicks in either Photoshop or Elements Ver 7.0.

To address the gradient itself (if you don’t care for digitally
generated backgrounds), I set up a piece of colored paper which has
no gradient, but I create the gradient with a soft light, which
diminishes a it travels up or down the curved piece of paper. I
photograph the paper by itself and save that image to be pasted in a
new file, over which I paste the masked image. It’s impossible to
tell it was not shot on a gradient background, I can change the
color at will with the Hue/Saturation tools, and it never scratches!
So, with one image, I have an infinite variety of colored
backgrounds available to me at almost no cost.

I might try getting some spray lacquer, either Krylon Krystal Clear
(matte) or Workable Fixative. Dust them onto the background from a
foot or so away, and build up several thin coats. That should help.

You can set it up so that you are shooting the back ground through a
piece of glass, while the jewelry is on top of the glass. I have
never tried this.

What I do is use small backdrops (gradient) that are only $10.00
each, and treat them as disposable.

I buy them at http://www.setshop.com.

Yes, they are hard to find at the site. They are in the Tabletop
section, then backdrops or something.

Obtain your own gradient file and print it yourself (if your printer
can print high quality):
http://www.dawnandevan.com/news.htm

I read your post with great interest, and I’d like to try your method
with Photoshop. Could you just fill in the blanks a little as to how
to mask out the original image and put it on the background? I have
Photoshop, but I’m not very skilled at using the layers, etc.

Paper, plastic, plexiglass - they scratch. And if one uses wax to
support a ring and then needs to remove the wax markings, one
increases scrathes and/or dicolors the background. The only solution
that I have found is to use non-reflective glass (that does not
scratch from placement or cleaning) over the background. 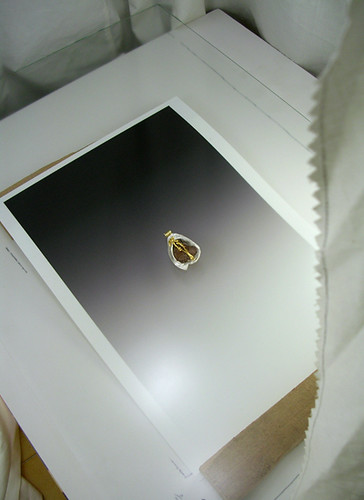 This is part of the set-up that I use.

Have a fresh sheet laminated at a print shop (Kinkos, even) with
matt or satin laminate. No more scratches. It isn’t very expensive.

This is exactly what my husband is planning to do. We saw a set-up
with a fancy table made of frosted acrylic which was brightly lit
from underneath and from the sides with fancy diffused lights, when
we went to a trade show and he was very taken with it. Needless to
say, it was far too expensive for what it was - so hubby is planning
to build something similar. He’s got rather heavily involved in
photography over the last year or so and has already bought a fair
few studio lights, etc so we’ve got those covered. He has also become
a dab-hand with Photoshop so hopefully, soon I’ll have some really
decent images!

His camera (Nikon D200) is better than mine (Nikon D40X) - or rather
he’s better at taking pictures than I am, as mine is perfectly
capable of taking superb pictures with the right person behind it! So
I’ve relied on him to take pictures for me, but I’ve had a real
battle trying to get him to use my light tent for the job. He’s been
convinced that there must be a better way, asking folks on his
photography forums how other people photograph such things as
jewellery (although he’s not found anyone else who does this kind of
work). So my images have had really annoying reflections everywhere.
Finally, yesterday I persuaded him that the light tent was the tried
and trusted method for photographing such things as jewellery, so
the pictures are improving. I can’t moan at him though, as I could
have done the images myself if I’d put more effort into working out
how - I will learn, I promise - but I do find it all a bit scary!
However, I do think the set-up which Wayne describes will be much
better for professional quality images.

I just felt the need to pipe in here regarding the whole
"post-processing software" thing and that being used to digitally
place the photographed piece of jewelry in front of a "fake"
gradient background. Does anyone actually think it looks real after
that’s been done? I don’t think it matters how meticulous you are
about removing just the right amount of actual background and doing
the overlay onto the fake background just right, it always looks just
that, fake. I haven’t been on a show jury, but I have to believe
that could be very distracting for them, and could therefore actually
reduce your chances of getting good marks in the jury session. It’s
not THAT hard to create a photo with a gradient background “the old
fashioned way” (either with gradient paper or just with lighting),
and I’d think it would be a lot better to have a real looking image
that has to be edited as little as possible. And trust me, I’m not
against photoshop or what-have-you when the white balance was more
yellow that you thought and your silver piece looks gold, or you
didn’t realize until later that a smidge of your orange shirt shows
up in a reflection, or some little herd of fuzzies floated through
the space without you realizing it, etc. These are slight
alterations that can be made to the image (while still keeping the
actual image an honest representation of your work, of course!), but
they don’t leave it looking fake. Ok, so JMHO.

You make an interesting point Lisa. Hubby and I want to have a go
doing it the way Wayne suggests, using a light table and using
Photoshop to place the image onto a digital background - but we will
more than likely experiment using a printed gradient background
placed in my light tent too.

I really like the look of the former method but you may be right, it
may look fake. I’d have to take similar images using both methods
and compare them. If anyone else has done just that, I’d be
interested to see the results.

Well, some like it, some don’t…done properly, it looks fine.

Like I said, a better way is to simply photograph whatever actual
background you choose. Lit properly, a piece of paper or fiber of a
single uniform color will have a gradient, if that’s the way you
like it.

Save that image, it’s as real as it gets.

Then photograph your piece, mask it out (takes two seconds when you
light it correctly) and place it on your photo of the real
background. That background will never scratch, and the lighting in
every one of your images will now be perfectly uniform. It’s how the
big boys do it, folks.