If cost was not an issue, how useful would a laser or PUK welder be for someone who does a lot of fabrication of small sterling pieces (rings, pendants, earrings,broaches, etc). Can small parts be quickly tacked together and then conventionally soldered? I spend so much time getting small parts to fit and then hold together before actually soldering. I’m not really considering a welder (because cost is an issue), but am curious just how timesaving it would be.

I do exactly that type of assembly using my laser.
I am not sure I could justify buying the laser just for this operation, unless you are handling a very large volume, but it is a tremendous time saving step in assembly, when you are able to tack weld items quickly, and then flow solder with no chance of parts shifting.

I bought a PUK 5.1 a couple years ago to do exactly what you want to do in sterling silver. For me at least, it has had a steep learning curve, and I am still on the steepest part. Silver is a real challenge for a pulse arc welder. I knew this before I bought it. I have used it tack small pieces as you describe and it works well holding pieces together prior to traditional silver soldering operations. I have also used it to tack odd shaped bezels to a bezel back. The PUK allows me to keep the stone inside the bezel maintaining its shape while I tack it to the back. Then I remove the stone and solder them together. Click on the following link to see an example. 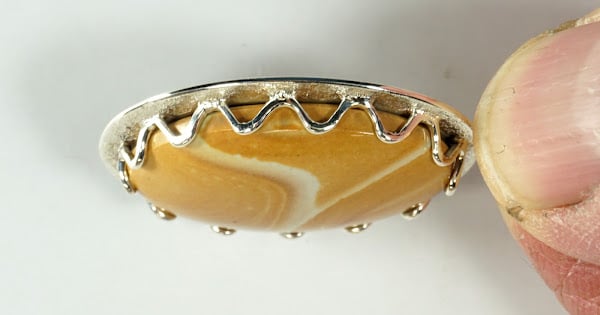 They are great to close jump rings and my favorite use is to create small rivets. The PUK lets me head the rivet on one end, pass it through the pieces to be joined and then head the other side. A small tap with a heading punch and they are done. Click on the following link to see examples.

The PUK works great on gold and other metals, I just wish that it was as easy on sterling silver. If you want to see a PUK artist who works on silver, take a look at Jeffrey Herman’s work at:

Thank you James and Rob- I produce 4 or 5 pieces per week so not high volume at all. I know I would use it frequently but absolutely overkill cost wise.

While the PUK and laser are nice, wouldn’t a simple $200 “sparkle” welder do the trick for just tacking pieces together for later soldering? Just sayin’…-royjohn

Royjohn…I never used one, but I think that they will only work on findings made specifically for the Sparkie. There a several, actually most, pulse arc welders that are less expensive than the PUK 5.1. I just happened to make a lot of money that Christmas and went all out…Rob

Checking on this, I find you’re absolutely correct…what I was thinking of was the cheap Chinese pulse arc welders…they are about $150-$200 and I see a video by TheRingLord on youtube that seems to show one working fine for jump rings, etc. I assume you could tack with it on sheet, too. -royjohn

Anyone out there either - prints 3D resin prints for use as jewelry or know someone who does? I work for a sculptor who would like to order 100 or so 3D resin prints. They are approximately 1 inch square.

Ill check that out. I would really love to be able to tack on jump rings, prongs, etc. Although I’ve become a LOT better at these tasks, every now and then one challenges me and I find that “fiddling” a prong into position while keeping the solder fluid can result in disaster.

Dan ~ I’ve found success with jump rings and the like by starting with little clips of solder. I first heat the jump ring or piece I’m soldering, then I put a small drop of flux (I use a hard liquid soldering flux from Gesswein) on both the joint and on a small steel block. I reheat the joint enough to evaporate the flux leaving a film, while the jump ring is still warm, I then take a small clipping of the solder and put it in the flux on the steel block. Using tweezers, I then place it on the joint that I’m working on. The warm jump ring or joint evaporates the flux off and holds the clip of solder in place. Then it a matter of bringing the joint up to the correct temp. for the solder to flow. When soldering, it’s important to heat the whole piece and then concentrate on the joint. If you apply heat to the joint first, the solder will melt first and you can end up melting your jump ring.

It is very important to remember, the solder will flow to where it’s the hottest. I use to just place my solder with a pic, but that can be frustrating. By using small clips of solder the flow temp. is the lowest it will ever be. It’s important to realize that every time you melt solder, it takes more heat to melt it again.

When I apprenticed, we had an Electric Soldering Machine This was before lasers. We used this tool to tack heads onto rings etc. One had to be very careful, it could do a good deal of harm if one was not. We would tack the head and then go in and solder the head. While it could fuse jump rings, we never used it for that.

There were times where I wished I had a machine to tack something in place, but I managed to get by in my forty plus years without getting a tacking machine. Had I done more repair and trade shop type work, I would have considered a laser. I think I was told that because of silver’s very high reflective properties, lasers are better used on gold and platinum.

A good friend uses a TIG welder with argon gas, although he can do everything that a laser does, the learning curve is pretty high. For many things it is better than a laser. It makes a stronger weld joint, for one, and works well with silver. I had, and used a small TIG-welder for palladium and platinum work because of the argon gas was needed to protect the palladium, but I never felt as comfortable using it and would use my natural gas and oxygen torch for just about everything else.

Some of my Work

Thank you Thomas for your very detailed response! I am so grateful that you share your many years of experience. I’m familiar with the necessity of heating the whole piece and concentrating on the joint as well as solder flowing towards the heat, however I realize that I forgot that the melt point of solder increases each time it melts. I use pick soldering 90% of the time and frequently end up remelting the ball of solder if it falls off the pick or the joint. I am going to try the technique you suggested and see if it helps.

I try to arrange my components so the pieces stay in place by either flux-holding, gravity or tension (tight holes or grooves) whilst I am soldering and if this happens as intended the joint is successful, but I occasionally find that a component (jump ring or prong mostly) will shift and I need to nudge it into place whilst the solder is fluid. One hand is doing the nudging with a pick or tweezers (I don’t have the steadiest hand), and the other hand is keeping the flame on the solder- this is usually when something goes wrong. This is when I think how nice it would be to be able to hold the joint together with my hands or tweezers, press a foot pedal and a spark or laser blast fixes the pieces together so I can then solder them as usual. I wondered if this was a fantasy or if this is actually how lasers and PUK units work?

Ultimately, I am just a hobbiest (with no budget) who loves making jewelry and part of this love is the challenge and learning how to constantly improve techniques. Making something easier may actually take away some of the fun. On the other hand, I really enjoy new tools and technology… a lot

Sorry, this has nothing to do with a welder but may be useful for holding small things. This video shows a great tip for holding claws in an exact and stable position before soldering, using customized tweezers. I bet you can extend the concept to other situations. Tweezer Trick. (Jewellers Deep Knowledge Hack) - YouTube

And here is a clip from a Diamond Mounter video that shows how he puts the tweezers in a holder for soldering. https://youtu.be/0FgP6bW5ZPU

Thanks Vera- I haven’t tried that exact technique but plan on giving it a go. I’ve watched several vids from that channel in the past and enjoy his style.