Hello,
I am trying to find out if anyone out there has a good technique for “re-flattening” sheet metal after you have worked with it already? By work I mean, texturing, snipping, hammering, sawing, etc…
I have tried annealing / re-annealing the metal I am trying to flatten. Then using a rubber dead blow hammer on a flat surface. Also putting the metal between a steel bench block and a rubber bench block and trying to pound it back flat again that way. I have also tried using a very old “rolling mill” to re-flatten the metal, but my mill is off calibration so this does not seem to work either?
This has proved to be one of my main struggles in my silversmithing to date? It realy affects my ability to properly soldier bezels to anything…
I look forward to hopefully getting some tips/techniques that I have not yet learned. Thanks
This is my first ever post/question that I have attemted. So if it is wrong is wrong in some way or I did not follow the proper avenue/method, I apologize.

I put my sheet between 2 metal bench blocks, no rubber involved then tap the top block with a plastic hammer. Always works for me. Good luck!

Take the section you’ll be soldering the bezel to and place it on your steel block. Use a small(ish) leather hammer and tap around the perimeter of the sheet. Work your way toward the center. While you’re at it, before you put it away, tap the skewed edges you just made in your stock sheet when you cut the section out.

Check the archives to see how to adjust your rolling mill so it will work for you.

Hello Jason, To flatten a piece of gold or silver, I put it on a flat charcoal block. I then heat it to a red hot state and push down with another flat block of charcoal. the piece is now flat and dead annealed. It won’t warp when next you need it. Have fun. tom

To flatten gold and silver sheet, I use a method taught to me when I was an apprentice, it works perfectly and was the system used by silversmiths who made boxes and photo frames at the company where I was trained.
First anneal the sheet, then grip the sheet between two sheets of 1/8 " thick flat stock steel sheet, gripped tightly using steel G clamps, then anneal the steel sheets until they are dull red and let it cool without quenching. Then when you undo the clamps you will have a nice flat sheet of precious metal. This system was also used when the silversmiths wanted to large flatten silver trays. As i only flatten small pieces I bought what is called gauge plate here in the UK, like this product. And these are the G clamps I use. 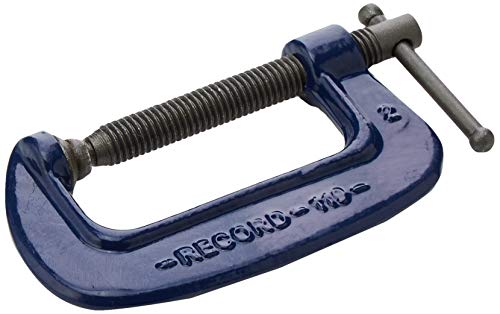 Slim section permits use in situations where space is limited. Particularly useful for the craftsman with smaller work. The boat builder and the handyman. Blue stove enamelled finish. Throat depth: 20mm

Thank you everyone, I appreciate your time and assistance.

Thanks for your input!
Janet in Jerusalem

Hi Janet,
this method works well, I have used it for metal thicknesses up to 1.5mm. thick. If you wanted to flatten thicker sheets you would need thicker steel plates and a lot of heat. Most of my work was made from 1mm. thick gold sheet.

I wonder how James’ method of using C-clamps would work with Argentium since it tends to become brittle and even crack under heated pressure or if the treatment is gradual enough to prevent this?

What kind of torch do you use to heat the steel plates and about how long does it take to get them to the required temperature?

Janet, I use a Sievert propane gas torch, heated on a few firebricks. I use a large nozzle in the Sievert and it only takes a few minutes to heat the steel plates up to a dull red colour, for small pieces I have heated the clamped steel plates with my Little torch fitted with it’s largest nozzle.

Morning James,
As one old silversmith to another, can you for Janet’s sake actually specify the SIZE ie dia of your sievert torch, to me thats essential tech info for someone like Janet who is basically a bench jeweller, and probably never worked in a big shop like you have? and I do.
I use torches by Calor, and they range in size from 1/2in up to 2in dia for heating.
For silver brazing I use the BOC standard oxy acet torch using oxy and propane.
for heavy heating I use an oxy/acet cutting torch ie size up to 1in thick steel type.
The propane torches are mounted vertically on a 1in dia pipe which is an old bicycle repair stand modified.
This has an 1in angle square platform some 9in square.

On that I put stainless steel weldmesh 1in sqs. I use that for heating up anything prior to forging or shaping with the 1.5in dia propane torch head underneath. When in a production run of say 2500 hot drop stamped bronze plaques this stand is modified to form a oxygen free enclosure .with a lift up lid to place and remove metal prior to placing in the die.
all rather time critical. Only a few seconds to do it right.
As mentioned before, im lucky to have 3 of the B’ham Hazelwood and Dent drop hammers( do you know these? James?) here apart from the coining presses and fly presses.
Happy forging to everyone this Uletide.
from Ted,
In Dorset
UK

Thanks again everyone for your responce. I mainly use the industry standard Smith Mini torch (oxy/propane). I also have (but dont use often a Smith “silversmith/handy heat” torch), I hate it… I will just call myself a tinker. I am not a “jeweler”. Jewelers are far more vast at stone setting & design. I am not a silversmith, they have a much more knowleged grasp on techniqes, metal manipulation, etc… I graduated from the American Jewelry Institute in 2014 & am a certified bench jeweler… but I just have a makeshift studio room in my home. I work hard to make things and the sit. Again I appreciate the ideas and support. J

Very interesting topic. Because a lot of my work is silver overlay, making sure both the front and back pieces are flat is always important to me. I’ve been considering buying a Durston Planishing Press (https://www.riogrande.com/Product/Durston-Planishing-Press-and-Hammer/112950). Does anyone have experience or thoughts regarding this tool?

I particularly like the small bench footprint and immediate availability/turnaround when I need to planish a piece. Obviously, this would work-harden rather anneal the metal as the heat-and-press techniques presented above do. Are there other considerations?

Alec- How big are the sheets you want to flatten? I find that placing a
sheet between two bench blocks and smacking them with a sledgehammer works.
But then I don’t try this on anything bigger than say 3x3 inches.
Jo Haemer

Sledgehammer? heck I use that method for bezel setting…LOL…

Gerry! from my mobile-phone!

Thanks Jo. The largest piece would be an 8"x1" sheet for a large overlay bangle bracelet. Most of my stuff is smaller, however, pendants and such.

Gerry, you need to cross-post your technique to the “setting heavy bezels” (emphasis on heavy) thread!

Sledgehammer? heck I use that method for bezel setting…LOL…[image:

Gerry, you need to cross-post your technique to the “setting heavy bezels”
(emphasis on heavy) thread! [image:

And yes I have also used Edward Frater’s technique. With an emphasis on
the LIGHT part of the light setting.
XO-Jo

I use a rawhide mallet on a steel bench block. Most of my work is in 20-24 gauge metal, and this works quite well. Also, keep in mind that metal flattens better if hammered with the curve face up, meaning you are flattening the metal downward. Sometimes the middle will be curved one way and the edges another, so it is always good to hammer as above first, then turn the piece of metal over and hammer the other way. Good luck!