I am considering purchasing a disc cutter and would appreciate any words of wisdom from those who already own one. Like rolling mills, they appear to cover the waterfront in terms of construction and price. I would not use it very often, but at the same time don’t want to be frustrated by something that doesn’t work and requires a lot of remedial work after I cut the disc. The size and gauge would probably range from 26 - 18 gauge gold, sterling and copper, 3mm - 20mm in diameter. Thanks…Rob

Note From Ganoksin Staff:
Looking for a disc cutter for your jewelry projects? We recommend:

I have the PepeTools 196.10 disc cutter set. I would definitely buy it again. Like you’re planning, we don’t use it all that often so for us, the cost vs. benefit ratio is a great value. When you need a large, perfectly round hole or disc, there’s no better option.

I use it in the Bonny Doon press rather than whacking it with a dead-blow hammer. It takes a tiny bit longer, but it is much more controllable and presents far lower risk to the cutters and the discs, especially with thicker metal and/or larger discs. If you use it with a hammer, make sure to use it on wood or rubber or something similar. Make sure you hit it absolutely square-on or you can bend or even break the smaller cutters. If you punch out a disc over a hard surface with a hammer, the edge of the cutter will deform the edge of the disc when it hits the surface under the cutter. Using a press negates the need for a softer surface.

You also have to use just the right amount of force when whacking it. Too much and you’ll flatten the edge of the disc, even on a soft surface, not enough and you might get a damaged disc from having to hit it twice. Not an issue with the press.

Hope this is helpful for you.

I have used a number of different types, including a very cheap one. I
would say any will work, especially if used with a press, but two qualities
can make them a lot more pleasant to work with.

If the cutters have a slightly angled face they cut much more easily. Since
the cut doesn’t happen all at once, it requires much less force.

And I really like the ones that can tighten down on the sheet to hold it in
place. Then if you do actually end up having to hit it twice, it won’t
shift. Or if you are lifting it and placing it in a press, again, it won’t
shift.

If you have a hydraulic press (I have the medium Potter one), then they all seem to work fine. Remember to center the punch on the press platen!!! That is critical.

If you don’t have a hydraulic press, then it’s important to know that the top part of the Pepetools one can be tightened down to hold your metal in place (I think the Swanstrom one that Rio sells also has that feature, though in a slightly different configuration). The cheapie one that I have does NOT have a tightening feature. You put the metal in and rest the punch on top of it (though the holder).

When I was hammering, I used a 2lb brass head mallet. I’m not the strongest, so I would often have to use two or three blows to get the disk cut. That was ok with the Pepetools one, but in the cheapie, the metal would sometimes move and I would get score marks. (This was even if I had taped down the metal.) YMMV, of course.

As has been mentioned, the ability to clamp the plates together is an important feature.

Something else to consider is the hole spacing from the bolt that clamps the plates if you’re going to be cutting washers. If it’s too small, the bolt can get in the way of the outer portion of the washer.

I’ve had zero trouble using a brass mallet with my Ikohe cutter. I use a 95 durometer urethane pad to protect the punch, and put the assembly on my anvil. I always coat the punch with bur-life, and always shim the plates using a small sheet of metal of the same gauge as the one I’m cutting.

Hi Rob
I have an Ikhoe disk cutter which I have been using for about 3 yrs. Very happy with it. I use a brass hammer.
Bought it from Otto Frei, but it does not seem to be on their website anymore. Here is a link to it on Amazon 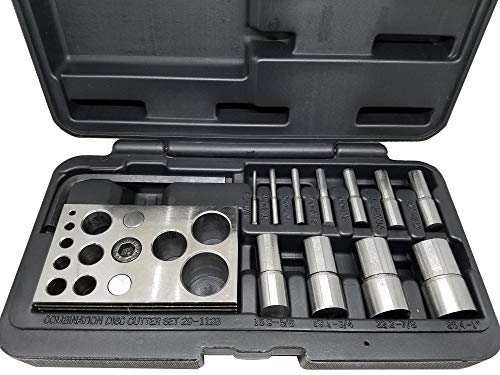 I also have a Pepe set. I bought one with the sizes to small to conveniently cut with a saw. I use a brass mallet and normally cut 20 gauge Argentium Sterling, brass and copper.

Someone mentioned washers. If you do them frequently look at the set Rio Grande carried that had a corresponding hole centering feature. More expensive, but probably worth the price and I wish I had seen them first.

Contenti has the Pepetools disk cutter including the centering dies.

(No connection with them — I noticed that when I bought the Pepetools ring bender recently.)

This set is even cheaper on Amazon

If you have a good set of dapping punches you don’t need the hole-centering
punches. A dapping punch that fits snugly in any given disc-punch-hole will
work to center the smaller hole for your washer.

To pat myself on the back, this is my very own handy tip.

I bought a round Pepe disc cutter with 1/8" to 1" cutters in 13 increments, tray for the dies, centering dies, urethane pad, lube, and a 2 lb. brass hammer for less than $200. It works well. My next question is: will cutting light cardboard or heavy paper to model different designs before I do them in metal damage or dull the cutters? Thanks…Rob

I just bought these from Pepe on Amazon

and have had to return them twice as they supplied the wrong punches - metric instead of imperial I think.

No problem with the returns so far - but it is worrying!

Always remember an old, but so very true story about NASA. An important
piece of machinery was made in Germany. Exact models and design, it was
shipped over to America.
The piece of multi-million $$ didn’t fit into the American rocket, why?
Germany’s attachment is on the Metric version and America isn’t!
Sad but so very true.

Mine arrived with “all the right stuff”, in good shape and well preserved…Rob

Did you get it from Amazon

? I think, maybe, their batches are mismatched and everyone else is OK. If so I’ll reorder from where you recommend.

Note From Ganoksin Staff:
Looking for a disc cutter for your jewelry projects? We recommend: