Does anyone know of a good source for reliably honest Cuttle Fish bone? An internet search turned up sources but most didn’t have good reviews…either well under in advertised size or broken up upon arrival. Thanks!

I found mine at a local pet store. You can pick the ones you want. Mine were packaged in 3s.

This is the cheapest I’ve found in recent days, and the largest .
10 large whole for $ 16.95 on Amazon.
Looks like at the moment they are not available, but I’d check back .

I used to be able to get nice whole big ones at Wally world for $ 1, in the bird section, but rarely do I find them anymore.

Thanks all! The best I could find (none locally) is from an online store called Prevue through Amazon…25 large 6" for $54. The reviews are mostly good. We’ll see! So, I’ve read that Tufa stone works better when “cured”; is the same true for cuttlebone?

Sooo…here’s my first cuttlebone casting for a ring shank. It came out pretty good, BUT, notice the little bumps/inclusions? Not a perfect casting but i’m going to use it anyway just to learn as much as I can from start to finish. Here are some assumptions I’m made regarding the inclusions and corrections I’m going to make before my next casting.

I noticed a 1/4 tsp of water under the casting on the metal table where I poured. I assume that this was the result of the molten silver forcing the remaining water out of the cuttlebone.
I think that the water is what caused the inclusions as the bone was superheated and the water vapor condensate created additional unwanted “features” in the casting.
To test my theory (sort of) I picked of a Salvation Army toaster oven today to dry out the next pieces of cuttlebone before casting.
I also read an article that said the quality of the casting can be improved if the silver temp at pouring is just molten enough to pour well but not as hot as it can be. Also to add just a small pinch of 99.99% zinc which helps lubricate the silver to fill all the small voids. So, I picked up some and we’ll see how that works out. Of course I’ll also need to add some fine silver to offset the small amount of zinc to be honest about stamping it sterling. 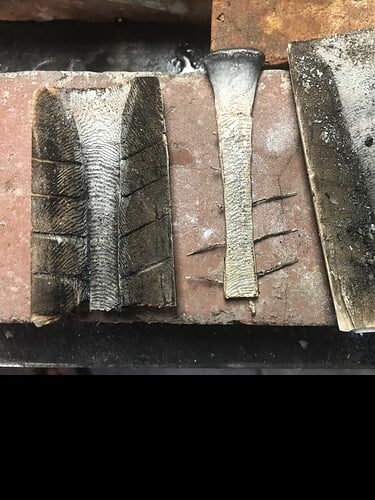 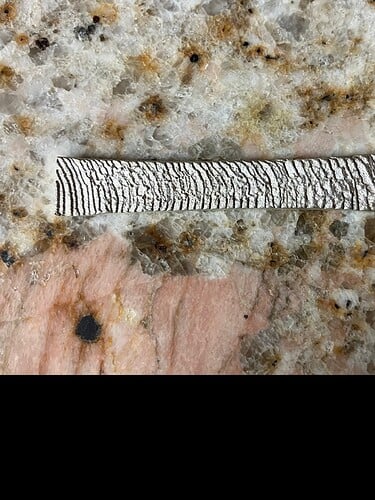 I think the toaster will probably work, but it could char the cuttle bone, too. I would consider using a microwave, perhaps set at 10% to 30% power to warm up the cuttle bone without getting it too hot. I don’t think you have to get the piece to much more than 180 degrees, if that hot, to allow the water to evaporate off. getting it too hot too quickly might be a problem. Obvously your casting filled fine, but you could also warm up the cuttlebone in a microwave before casting if you used twine instead of wire to fasten it together. I guess you know that it’s also possible to cast the ring in its circular shape rather than as a straight shape to be formed later. I love the texture of the cuttlebone! Fun stuff! -royjohn

My wife wouldn’t let me anywhere near the microwave in the house…lol! We’re going to find out soon though; two pieces are in the toaster oven (in the garage

). I started at 200 and now up to 350 at about an hour, is I’ll start there and see what happens. So far no charring! I’ll post a pic of the next one when I get around to it; this week is pretty busy bc I retire next Friday…more time at the bench if I can navigate the honey-doo’s

I haven’t yet tried the cuttlebone casting with the baked bone and casting changes but I did get around to using my first cast ring shank…like it so much I sized it for myself! 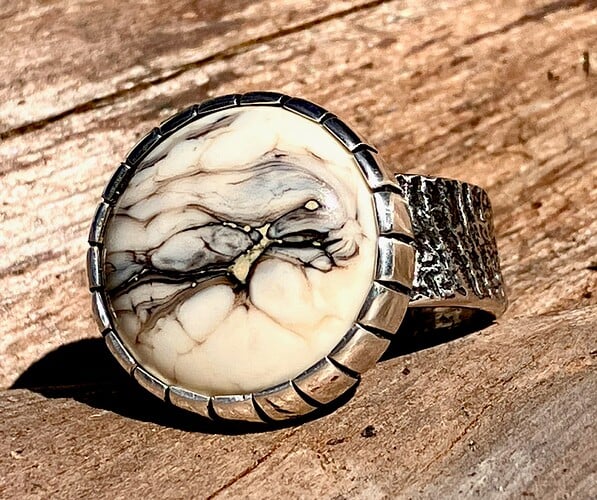 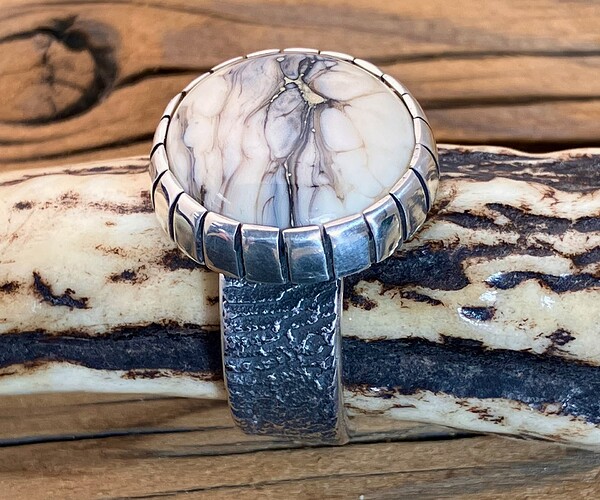 Nice! Castellation is fun to do. I

Thanks Rob…I agree! I usually have multiple “features” on/in a setting, but most of the time I like the way a castellated cabochon stands out by itself w/o the addition of twisted wire, balls, shot, leaves, etc.

Bruce –
Nice! Cool stone too. What is it?
– alonzo

Hi alonzo,
I was wondering if anyone would ask, and I’m glad you did! I was shopping for cabs on Etsy and stumbled across a ring with a “silvered ivory” lamp glass cab. It looked amazing so I went searching and couldn’t find any. I finally messaged Carol at Glassy Fields on Etsy who has 30 yrs in the custom glass business and asked about them. I asked if she could make some and she was excited to do so! She made up quite a few and I chose ten from the lot. Each cab is unique because of the process; when the (actual) silver is introduced into the glass it decides the pattern. Additional color variations can be added such as minute streaks of turquoise blue for accent. I never thought I’d use a glass cab but Carol’s art changed my mind…I guess I was guilty of becoming a cab snob…lol! Anyway, Carol is wonderful; we’ve had a lot of messaging going on. She’s a great communicator, an extraordinary glass artist, very open to custom orders, prices are amazing…I can’t recommended her highly enough!

Bruce –
Thanks for the reply. I thought that looked liked silver in there but never imagined that the “stone” would be glass. It’s a cool “cab” and your setting does it justice!
– alonzo

Sooo, I finally got around to doing another cuttlebone casting and applying the aforementioned changes…dried the cuttlebone in an oven, added small amount of pure zinc offset by adding .999 silver, poured at a slightly lower temp. Came out great!!! No inclusions! This one I cast as a straight 1/4" band, undecided to leave as a band, or, I have a great little round Poseidon Variscite cab with a castellated bezel already made for it. Decisions…decisions. 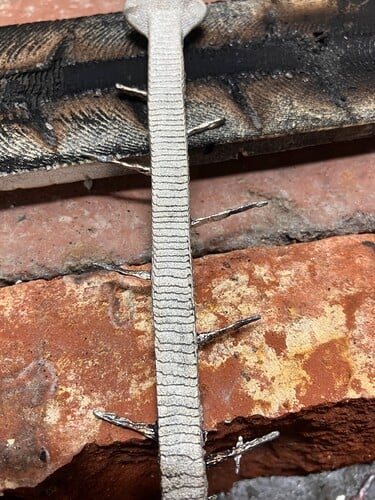 BTW, since I posted Carol’s Etsy info to this forum, she’s sold several more Silvered ivory cabs. If you’re one of those who ordered based on my recommendation, she asked me to let you know that if you contact her and mention my name (Bruce) she’ll toss in an extra cab! (assuming they haven’t already been mailed). BTW, I’m getting nothing from this, just helping another artisan who’s blessing others

I couldn’t find Glass field on Etsy. Do you have a link to her shop? Thanks in advance. 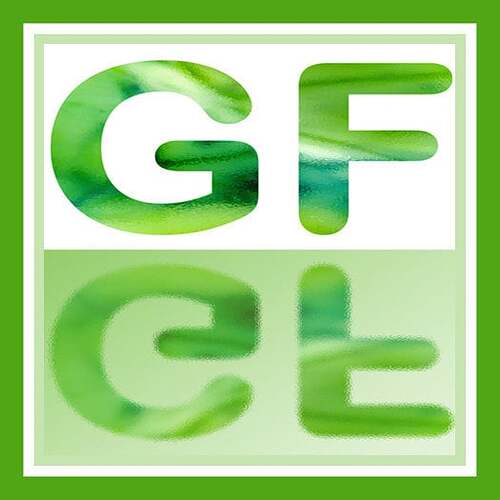 Shop Lampwork Glass Beads and Cabochons - Farm Grown by GlassyFields located in Milan, Michigan. Smooth shipping! Has a history of shipping on time with tracking. Speedy replies! Has a history of replying to messages quickly. Rave reviews! Average...

Try copying this and pasting into your browser

Bruce, I found her and she has some very nice pieces. Thanks a lot for your help.