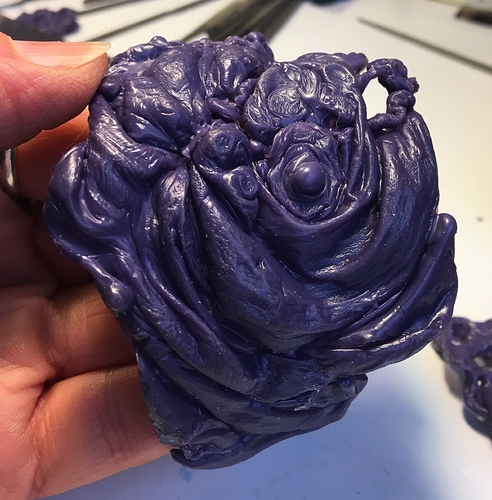 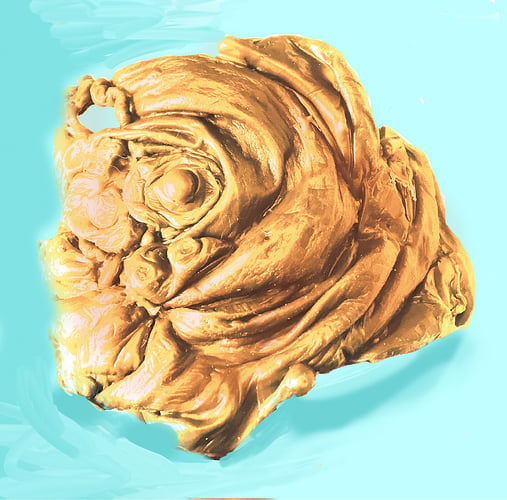 You’ll encounter several problems in trying to cast these wax-in-water blobs. First off, they are solid, so they will cast poorly due to shrinkage. Also, the deep crevices will fill with investment plaster, which forms thin fins that project into the mold cavity when the wax is gone. When the metal hits them, these fragile fins will break off, sending random loose pieces of plaster to mix with the metal, resulting in inclusions.

To maximize your chances of a good casting, I’d suggest you take a mold of the blob, using RTV rubber. When you remove the rubber from the form, you’ll be able to trim off the worst fins from the inside of the mold. Then you can cast a hollow version of the form in wax, using an initial hot coat to get the detail and subsequent coats of cooler wax that’s just skinning over on top to build up the thickness. You’ll need to pay special attention to the fins, since they heat up so the wax doesn’t build up as well on them. But once you’ve got a hollow wax form without holes in it, it should cast pretty well in metal.

Thanks for the response. They are hollowed out from the initial wax to about 1.5 -2mm then a mold is made and then cast again in wax. The photo doesn’t reflect the final state of the inside. RTV rubber would be nicer and easier than my silicone caulk method. My initial casts of this baroque stuff did pretty well, but those were smaller. I did hold it under boiling point extra long because I was afraid of steam blowing little holes in the investment.
I am wondering here, how to best cast this. Large sprues, smaller, more numerous sprues? Any odd other things I should know?

I cast bronze of this size. Vacuum casting for sculpture. I would position the wax so it is on edge in the flask, not flat. I would directly attach the 3/8 inch diameter sprue trunk from the flask rubber base into the bottom edge and continue to run it up to the top of the wax. I might also run 3/8 inch side sprues off the main sprue trunk into the left and right sides of the piece. I would attach the sprues into the wax from from the back side.

After burnout I find a relatively cool flask at 400 C works best with large pieces, with bronze. I use a silicon bronze (bronze S) from Contenti or ancient bronze from Rio Grande. I pour these at 1070 C. Both melt cleanly and I tend not to have shrinkage problems with these alloys. Your waxes might fit into a 4x6 inch flask. If you need to go to 5x7 you may be able to cast two at once off the main trunk. For bronze I calculate the metal from the density and wax and sprue weight and add at least 50 grams for the button rounded up to the nearest 5 grams, or 10 times the wax and sprue weight, and use whichever number is greater.

Unless your wax is a really thin shell (at which point little of what I say makes sense) I am guessing that you might be melting 400 - 600 grams of metal for one of these cuffs, as a sculpture piece?

Don’t forget to leave an offering to the casting gods.

Thanks for the info!
The casting gods will have all my attention right up to lighting my torch. Then it’s eyes on the fire.
I need a clarification for the first part about running the sprue from the button. Is that to the edge of the cuff or all down in between it? I’m afraid it’s one at a time until I can get an electromelt.
Much appreciated.
Cady