There’s a chance that I’ll have a commission for a pair of palladium
wedding rings in the new year. That’s 950 palladium alloy, NOT
palladium white gold. I have a few questions for those who have used
such an alloy.

I’m going to buy some and experiment but any advice in the meantime
would be greatly appreciated - thanks. 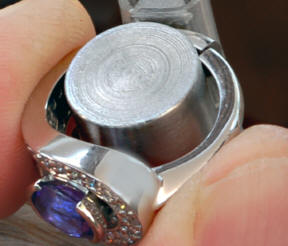 The palladium bench guide reviews the working characteristics of palladium and provides an overview of the unique advantages/benefits of palladium jewelry.

Ganoksin hosts a huge section on working with Palladium, Check it
out:

Something I can actually help with, yay!

Acetylene isn’t recommended as like platinum palladium has a habit
of absorbing carbon to its detriment (Hydrogen, and oxygen as well).
I use Propane/Oxy with a slightly reducing flame for soldering,
followed with a neutral flame to clean up the blue/purple oxidation
that is formed when palladium is heated.

No flux required, but you will have to get palladium specific
solders, these like platinum solders are available in plumb and not
plumb. I prefer plumb, costs a little more but the downstream hassles
make it worth the slight added expense.

As the platinum guild says (with some paraphrasing) palladium: it’s
not difficult it’s just different! I might add I find it easier to
work than platinum, but that might just be a factor of my not having
done as much platinum work as palladium work to date.

Some other pointers, try to keep separate tools if you are going to
be working regularly as this will keep contamination down, keep your
lammels separate (this is mainly for the convenience of the
refiners), you will need a platinum soldering board/pad, you might
also have to get separate buffing wheels again if this is going to be
an ongoing thing, other wise use felt.cotton wheel tips for your
flexshaft to polish with.

And yes read the stuff in the Bench guides it’s mostly what I’ve
said above, but I’m sure that with pictures beside the words things
will be all the clearer!

link to the palladium articles…

I hate it when my fingers get away from my brain like that.

I also want to add that if you’re soldering palladium to gold you
have to treat it like it was all gold, and use a soft solder and flux
as per normal.

Sorry about the mix-up.

I just finished a pair of 950 Pd wedding rings, and was very happy
with the results (as were my clients).

I used scrap from making the rings to do a test of some of the
various solders recommended. I was happiest with 20K white gold
solder, as compared to Pd hard, Pd medium, and 18k white gold (all
from Hoover and Strong, and using their 950 Pd alloy). It has an
excellent color match in most lights- right up there with my Pd hard
solder- plus is harder and thus easier to polish than the Pd solders.
It did seem a bit more prone to porosity, but that’s manageable with
some torch work.

Unlike some of my previous pieces: using this solder I could not see
a solder line in the final rings, nor did it cause problems in
polishing by being a lot softer than the metal. I am also happy with
the lower soldering temps, since my set-up is friendlier to that sort
of temp than those needed for hard Pd solder. I have a natural
gas/oxygen set-up. I also used my heat-sensitive goggles when working
with it, esp. with the Pd solders- but they were not strong enough to
do the job adequately, and I’ll be getting some Pt goggles for future
work with the Pd solders.

I used my usual polishing equipment and ended up with a lovely
result.

Browse unique items from AFMetalsmith on Etsy, a global marketplace of handmade, vintage and creative goods.

Several manufacturers are now making 950 pd solders, some in "plumb"
95% pd content, some lower. As Amanda wrote Hoover & Strong has some,
as does my employer (due disclosure here) in both 95% and lower for
easier flow.

It interesting you got good results from a very high karat gold
solder! Why were you happiest with the 20kt? Was it the flow, or the
color or?

Thanks very much for sharing your experience with palladium. I’ve
got some 18K white gold solder so I’ll try that as well as the
platinum solder that my supplier recommends (the palladium solder
contains cadmium so I don’t want to use that as I don’t have the
ventilation equipment for that). Thanks again.

I had a rather exciting bench session today. As a result of a
possible commission for palladium wedding rings, I bought some 3mm
square 950 palladium wire to make a ring for my husband for
Christmas to gain experience working with it. I knew my handheld
butane torch would never get hot enough to solder the palladium so
nagged my husband AGAIN to set up my oxy-propane torch for me. He
finally did so and I managed to successfully solder the palladium
with medium platinum solder, which made a beautiful invisible seam.

I was a little scared of using the “big” torch to start with but
soon got the hang of it and I was also a little afraid of using a new
metal, but it was really easy to solder - hopefully it wasn’t
beginner’s luck! The ring I made, started out as 3mm square wire
which I rolled down to approximately 4x2mm wire. I soldered it
closed then rounded it out and stretched it up to size on the ring
mandrel while putting a hammered texture into the surface. The sides
were then gently chamfered. So it needed regular annealing. I really
liked the way the palladium needed no flux and that you can get rid
of the oxidation by simply turning the oxygen down. It still needs
finishing, but I’m really pleased with the way it turned out. I’ll
be buying some more palladium soon and working more to get to know
this new (to me), exciting metal. I feel that if I can ever afford
platinum, it might not be as scary as I first thought. Thanks to
everyone who offered me advice regarding working with palladium.

Speaking of which, a week or so ago I was looking for a Pd950
hallmark and I mentioned I’d found one through microstamps.com, but
that the turnaround was rather long. Well I ordered one anyway (the
price was real good) accepting the stated three week delivery time
frame. Boy was I surprised yesterday (yes a Saturday) to get a knock
at the door from the delivery guy wanting a signature for the box
with my stamp in it! That was a whole 5days from my placing the order
to my signing for the package, not bad (in fact rather great in my
books) considering I’m in Australia and Micro-Stamps is in the USA…

So if you need a stamp fast I can’t recommend these guys highly
enough. Usual disclaimers apply, I’m just a very happy customer.