Is silverite a gemstone? I have seen it on Etsy and a couple small bead stores. It sort of looks like labradorite but some have more blue coloring and some red tones.

I have never heard of silverite. I don’t know if it is just color treated glass or a natural stone.

Silverite is a relatively new stone , a pairing of nature and science. The stone is a member of the cat’s eye family and it is treated with titanium to give this sparkly white, opalescent, and pearly sheen. 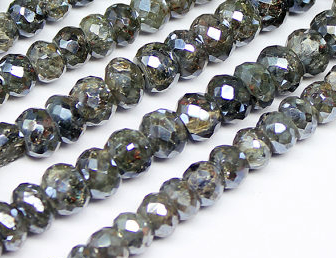 UPDATE July, 2016–I had 3 samples of “silverite” examined by a certified gemologist. She examined them using various tests, including microscopic examination and other tests. She found no indication that any of these were minerals, but were all GLASS with a coating, some sort of pearlescent paint or coating. She is a professional jeweler, a certified gemologist with one of the world’s largest and most well-known and well-respected gemstone suppliers----and she never even heard of “silverite” and consulted with others in her field–and they never heard of “silverite” either. She examined three separate pieces from 3 different sellers, and determined that ALL WERE COATED GLASS. These are NOT “corundum” or “sapphire” or “quartz” or any sort of gemstone or mineral AT ALL. PERIOD. Silverite is a FRAUD. Beware.
Not my examination - but likely correct.
GIA does not recognize the term at all as of 1/16/2023.

Lots of info here on silverite. InVogueJewelry: What is "SILVERITE"?