Can someone advise me on what program I should learn as it seems to be many options? What I have read it seems Matrix Gold is the one, but this is very expensive. Anyone has any suggestion on how to start on all this without it breaking the bank. I have to use photoshop and illustrator many years ago, so I understand using vectors. I should explain what I want to use it for I am wanting to start creating engagement rings and start tapping into the wedding market.

The program is free for the first 90 days, as a trial. Michael is a terrific instructor, his enthusiasm is contagious.

Fusion 360 is a very easy to learn program, and it has a ton of people (like Lars) that have great tutorials on how to get started.

The first year (basic functionality) is also free. so you can learn first, and when the year passes (or you’re hooked) you can either pay or find something else.

Fusion360 has a lot of skills that can be easily transferred to other programs, but in my opinion it’s a lot more user friendly and well documented. a ton of people also use it for 3D printing.

Send me a message if you’re ever in trouble, i used to use the program at work.

I use Blender as a 3D designer. Awesome program and it’s free. I use it for commercial renderings (The Laughing Cow, Vulcan Equipment, etc.) Vulcan even uses my models in their print catalogue. I use it to make resin positives (Powercast Burn) to burnout in my oven.

Thank you totally check this out! Amanda

Thank you for the Info do you now where I would find information on how to use this program for jewellery creation?

As a 3D Designer, I will say that getting into any 3D program is going to be a hefty task. Blender is nice because there are so many beginner tutorials it will make your head spin. You’ll need to focus on modeling basics which are covered. I would start with either the donut tutorial or the chair tutorial. 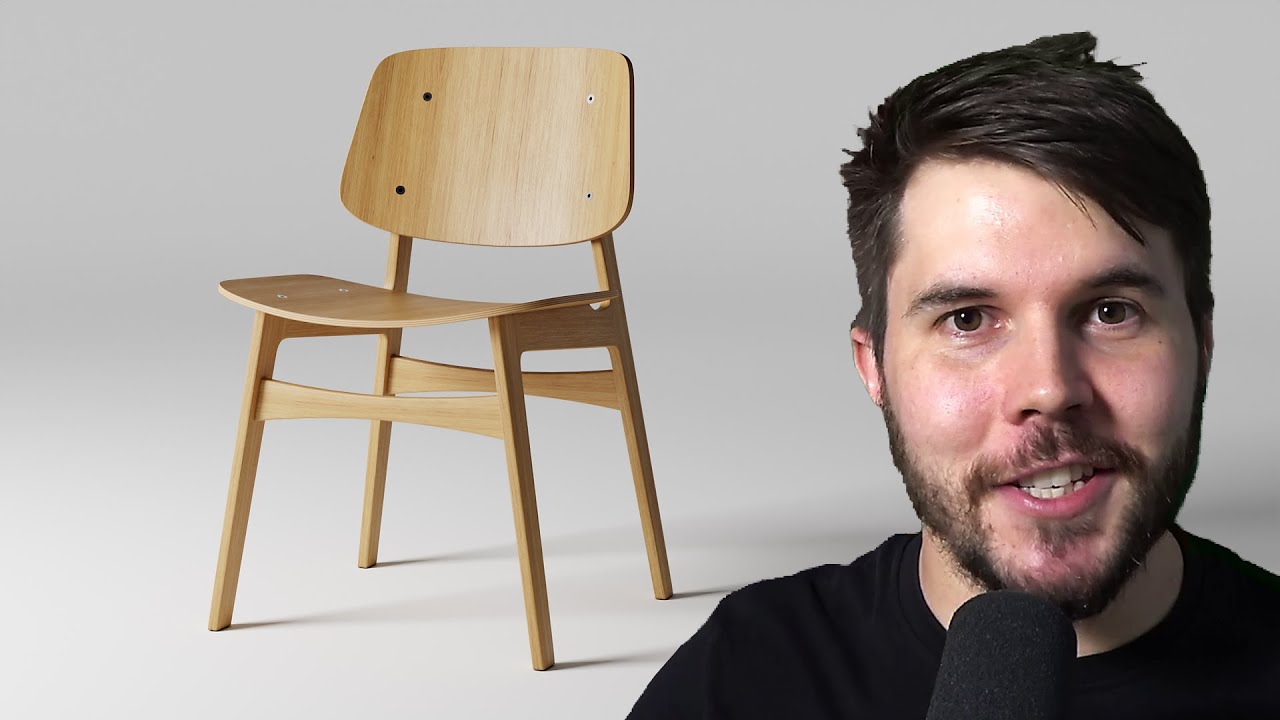 My man uses Rhino for all kind of modelling things. This software is some kind of industry standard. Then there is RhinoGold and Matrix, that has all sorts of bell and whistles built on top of Rhino. They automate standard jewelry design operations, and my guess is that Matrix is the most widely used program in the industry. Then there are plugins for Rhino. Like Panther3D, AuroraJewels and others, that somewhat fall between Matrix and naked Rhino.

And then there is MoI “Moment of Inspiration” that has a very surprising, almost naive, user interface. Thing is, this software is made by the same person that made the first Rhino, and MoI essentially does the same thing, minus the bugs. And minus some exotic features. And at a very manageable price. Unlike Rhino, MoI doesn’t try to do everything for everyone. And it’s a power tool for what it does.

Thank you! I will totally check this out!

Rhino is old and costs a lot. Blender does everything Rhino does plus sculpting like zbrush.

Definitely agree with going with Blender. It’s free, is constantly being updated, and also has a pretty great rendering engine. It doesn’t do a super fantastic job with gemstones, nor is the rendering setup super intuitive (at least not as good as Keyshot, which is really easy to use, and does a wonderful job with gemstones, but is super expensive), but it still gives you a massive amount of control over color, roughness, lighting, etc., etc., and there are a ton of tutorials online to teach you how to use it.

In my opinion, Matrix has long since lost its magic, and is far too expensive for what it offers. If you’re good at drawing, you can actually just use ZBrush and photoshop (or any art program that allows you to do greyscale), and import a flat drawing as an alpha and sculpt on that. It’s what we did at my last shop for almost all of our designs, and it works great once you figure out the nuances of it all (took us about 2 years of trial and error, but we’ve really got it down now).

You can renew free Fusion360, it is just a bit difficult to find. Will try to find a link later.

Hi. I have used the rhino (McNeel) software trial version for a couple of years now. Just set up a new email when I want to use it for a while. there are lots of very helpful tutorials to get you started.

Thank you, everybody, for your comments and thoughts. I have brought a class 17 dollars to learn the basics of Rhino, and I have found someone local who is willing to give me one on one classes how is a jeweller. So am going down load V6 rhino and start thier. I had trouble download blender because I have an old mac but have just updated my computer to a more updated system so I can download blender now and take a look at that. Excited and feeling slightly overwhelmed at doing this, but I am sure it will be fun and will move my creativity and business on a little bit further. Thanks again Amanda

Feeling exited and overwhelmed is all part of what we do as jewelers!
One thing that’s always plagued me, is that there are way too many 3D programs to learn, and I’ve yet to sit down for the requisite amount of time to actually learn any one of them to mastery. I’ve used Matrix, Rhino, ZBrush, Fusion 360, Blender, Maya, and a handful of programs that came and went, never to be seen or heard from again.

I would say that both Rhino and Blender are good paths to follow. They are both supported by passionate people, and are quite capable. I’ve played around a tiny amount with Rhino 7, and it seems to really be bringing itself in-line with the competition (Rhino 6 seemed to me to not be worth the upgrade price over 5, but that’s just me). Personally, I’d still recommend putting time in to Blender (it is more intensive of a program as far as the kind of computer it requires, but I’d say getting a newer, more powerful computer every 4-8 years is probably a good idea in general), since it does have a ZBrush-esque sculpting capability, and in my opinion, a way more intuitive implementation of NURBS than Rhino or Fusion, that doesn’t require tons of time and effort fiddling with complex curves to achieve the shape you want. And, I think most importantly, the render engine is fantastic, so you can get really accurate looking digital renders of the pieces you’ve created (if it works, there should be an image of a render from Blender in this post, but it’ll the first time I’ve uploaded media to the site, so who knows if it’ll work)

Just to further the discussion about potential programs: I use Fusion 360 quite a bit, since we have two 5-axis mills, and the machining capabilities of Fusion are fantastic. I’ve come to the decision that it is an absolutely terrible program for jewelry design, and probably not for the reasons you would think.
It’s a very capable 3D design program, and is incredibly powerful when you want to make this widget or that widget. But when it comes to the nuances of jewelry, I feel it’s incredibly limited. Also, and to me, more importantly, it’s a very ‘closed-garden’ sort of environment. It is terribly at working with STL files (which most other design programs have zero issue with, and is the preferred file type of damn near EVERY industry), and if you want to export an STL file, you have to rely on cloud translation, which puts you out if you don’t have an internet connection at the time (bye bye 3D designing while on the bus or the train). These are totally nits that only I’ll pick, but I still feel like I need to get them out. All that being said, it’s a fantastically powerful piece of software if you’re going to be doing any kind of machining, or need to create something that has perfect dimensionality.

Anyway, I’m glad you’re taking the plunge in to 3D design @jewellerAJGreen ! It’s a crazy world all unto itself, with just as much terminology and nuance as the jewelry world. Best of luck, and I’m excited for you to post your progress and what you’ve achieved!

PS: Here’s the rendered image from Blender to show you how good of a job it does. I hope it actually uploads 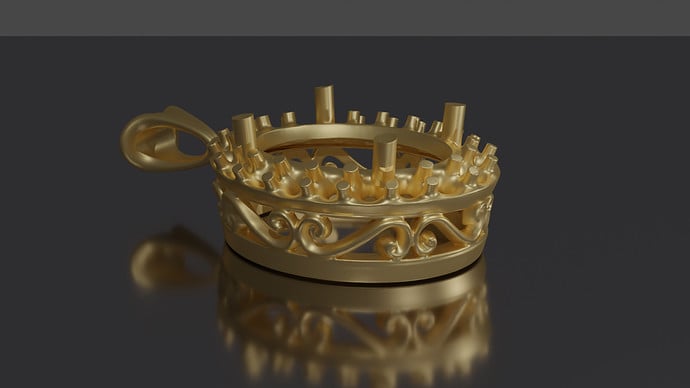 Thank you so much for this message! The rendering looks amazing! I am starting in Rhino and am sure what I learn thier will make it easier for me to transfer over to Blender. About to start my first session!