Does anyone know the literal translation of “plique de jour” or why
that term is used to describe an enameling technique? I am
researching Lalique and his students, or studio workers. Is there
anyone with on this?

Actually you may be speaking of ‘Plique a Jour’-an enamelling
process in which the goundplate is removed after firing;the end
result resembles stained glass, the translucent enamel framed in
metal.

'Heinrich Levinger, while not as well-known as Fahrner, but was
another Pforzheim manufacturer which were noted for stylized organic
forms in plique a jour enamel and silver. They made designs
attributed to Viennese designer Otto Prutscher (1880-1949).

Enameling is one of the most important decorative elements in Art
Nouveau jewelry. One of the techniques that Lalique was noted for,
and which became closely associated with Art Nouveau jewelry. It is
particularly effective when used to depict insect wings and
landscapes with sky and water. It is a difficult technique, and the
results are fragile. Intact pieces are scarce. Taken from Christie
Romero’s ‘Jewelry Identification and Price Guide’ 3rd Ed.

Erika Speel in her “Dictionary of Enamelling” page 119 under Plique

Not one of my French dictionaries has the word “Pilique”. Perhaps
the word is archaic.

One of my favorite web sites, Merriam-Webster.com, lists this
definition:

Main Entry: plique-a-jour
Function: noun
Etymology: French, literally, braid letting in daylight a style of
enameling in which usually transparent enamels are fused into the
openings of a metal filigree to produce an effect suggestive of
stained glass

That pretty much nails it.
James in SoFl

The term, I believe, is “plique a jour,” and refers to a technique
of using transparent enamels in backless cloisonne. The term
translates loosely as “light of day,” a reference to the fact that
light shines through the backless cells, creating an effect
reminiscent of stained glass.

The right name in French is “plique a jour” or “plique-a-jour”.
“Plique” originate from Latin, where "plicare " means to fold, or to
roll. “Jour” means day, and more relevant to this particular subject,
daylight. As long as plique =E0 jour is translucent enamel on
filigree…

The following definition is taken from this Plique =E0 jour site where
you can found much more explanations :
http://www.plique-a-jour.com/.

The Dictionary of Enamelling by Erika Speel defines Plique-a-Jour as
"Translucent or Opalescent Enamels fused to span across a network of
cells formed with gold, silver, silvered copper, or copper, without
a backing under the glazed areas. The fused enamel is an integral
part of the finished surface, with the glaze forming a shell veined
with metal outlines. Plique-a-jour is seen to best effect when lit
strongly from the back. Lacking such illumination the enamels tend
to look dense or semi-opaque." Hope this will help

It’s actually “Plique-a-Jour”, and it refers to enamel work without
any backing under the glazed areas.

Re: “plique (I think I spelled that right) a jour” it means “light
of day”

It has been nearly ten years since I have read about Lalique, but I
remember that it was ‘plique-a-jour’ not plique de jour and that it
means ‘open to the day’-> because it is not backed in metal but
open like little stained glass windows- open to the day. This is
why it is such an uncommom technique- it’s virtue is it’s downfall
in it’s fragility. From Colleen Baran

Yes, except there are new styles of plique-a-jour now, one is
pierced method, in which each window is sawed out of a sheet of
metal. Another method is using metal mesh.

In Russian style plique-a-jour, there is no “ground plate” that is
removed after firing. The enamel is held across the openings without
a backing with good old surface tension.

The book was published recently (2003) is gorgeous, IMHO, as well as
informative and one my enamel library would not be complete without.
You can access excerpts from her book site beyond the glossary.
Many of the enamelists cited in the book have web sites to visit and
for those who appreciate enamel, drool over. 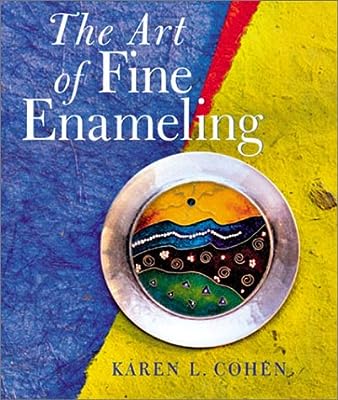 Read Excerpts from The Art of Fine Enameling on Ganoksin’s Tips from
the Jeweler’s Bench:

I’ve never really found the answer to this and I don’t know if there
is actually a literal translation. My thoughts have always run along
the lines of it meaning “applique of day”…possibly referring to
the small cells being “applied” (as to a solid sheet of metal) and
daylight streaming through. I’d love to hear what others have found
as there is really so little written on the subject.

In french, “jour” can also be understood as “light”, and “hole”.
“Plique a jour” means that the enameling is not made on solid metal
but “on” holes and the light goes through.