Too Hot to Hold!

I am working on my first wide band ss 18ga ring; while trying to clean up the soldier line inside w/the 3M bristle spiders the ring gets so hot it burns my fingers. I have placed it in a vise with a polishing pad and it melts the pads. What are your answers to this problem if any of you have it? I know many of you use the split mandrel and 400 grit. Is there no heat transition there?
Any help appreciated. Patricia

A few things come to mind…you are pressing too hard. Things shouldn’t be getting that hot with 3m bristles. Also try a file first to remove most of the extra, then use the bristles. Lastly…use less solder. Good luck!

Thank you Wendy. You are correct about too much solder…First time I have had to do much clean up but the ring is thick and wide and my brain overcompensated. Needle file will help.

I have used silicon carbide and pumice rubber abrasive wheels for years to do my polishing prep and light removal of solder, dings, dents etc. Split mandrel with various grit papers also works. Start with a file if there is a lot to remove. Good luck…Rob

Thanks Rob. I suppose I always think that the file removes too much. I have a lot to learn.

There are lots of ways to do this and I forget everyone of them when ever I work on rings.

When ever I work on a ring I use cotton gloves for the heat issue. I don’t use spiders inside, I stick with the black silica Carbide wheels on my Foredom Tool… The wider ones. If you have to, start with a half round file. I also use 320 grit black paper glued to a dowel. It takes awhile to find the process that works with your shop.

Forgot to mention heat. Don and I make very heavy silver bracelets, some with a much as an ounce of silver in them. We also, generally, apply a high polish regardless of the final texture. Imperfections will show through just about any texture. To move and remove all of this metal, you generate a lot of heat. As a result, we wear heavy leather and cloth gloves for tripoli or first polish and then cotton gloves for final polish. Yes, gloves can be dangerous and I have the experience to know. I use a foot operated dead man switch to turn on my polisher. Without the gloves, we would have horrible burns, so the only choice is gloves and to be very careful. I also use gloves when I make a ring. I am trying to avoid making a dirty mess of my hands as much as I am getting burned. You can hold the ring in a simple ring clamp. I like the wooden hinged clamp that acts like a pair of pliers. You slip the ring inside. This allows you to get free access to the inside of the ring. Outside is easy, just use the steel mandrel that you shape the ring on. This isn’t the only way, just my way. Work at finding your own, but try to avoid heat. I now have neuropathy in all my fingers from 47 years of abusing them in my shop…Rob

I’ve heard not to use gloves on polishing wheels, instead make or purchase some finger cots or you might like Coban tape. 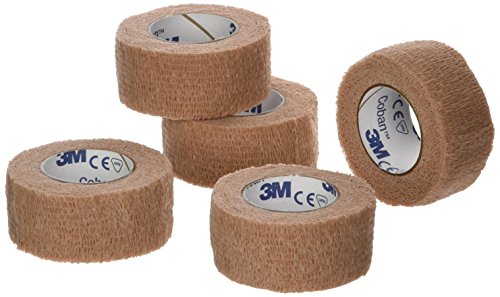 A self-adherent wrap used to secure dressings and other devices

Tried both options. Prefer gloves knowing the risks. I added the foot switch a few years ago when I rebuilt my shop.

We have beat this horse on shop safety many times. And I will beat it again anytime the opportunity arises.

I have lived my life with hand injuries. None were caused by polishing. Burns are a different story. I will say that the worse burns I have ever had were from polishing. I use cotton glove liners for welders gloves. I buy them by the dozen pairs at a welders supply and I toss them when I think it is the right time. I have used protective tape which I find to be terrifyingly dangerous. Leather finger condoms which are clunky and inarticulate.

There is no safe way to run high speed motors. The only thing you can do is limit the possibility of injury. Start with making jewelry that is safe to polish and wear. Continue by doing as much hand work as is possible. A piece of 1" vinyl hose on the spindle between the wheel and the motor and a piece of wine bottle cork covering the spindle that is beyond the wheel is a good start. Only polish between 6:30 and 9:00 on the wheel. I don’t wear long sleeves and rarely a shop apron at the wheel. Develop a process for polishing and follow that process every time you polish is another way. That’s just the beginning of my shop safety when polishing.

A quick tip about finishing solder joints on a ring shank. File the solder on the INSIDE only, down only 80% of the way. Put it on a mandrel and give it a good whack with a rawhide mallet. That will round out the shank and smooth out the seam a little. Then and only then emery the inside and outside. If you emery and file both the inside and outside the seam will often pop open when you round it up.
I always only file 80% of the way on a seam or any flaw on the piece. Why? Because if I file it totally smooth, by the time I have emeried out the file marks and then polished the emery marks out the ring will have a thinned out spot where soldered. Also first emery most but not all of the way with about a 320 grit emery. Finish emerying the seam down with a finer grit emery like say 400-600 grit. That way you spend much less time on the buff which can drag out the seam or open up pits in it. I also find that rubber wheels drag out seams and pits so I stick with emery inside and out. I use these on the inside of rings. https://www.riogrande.com/product/slotted-mandrel-for-emery-paper/333130

I’m with you all on the gloves. I personally use nitrile coated gloves since they seem to offer a bit more protection and are a bit closer fitting for those worried about the risk of catching them in the motor.

Thanks Don. Good information. Your shop is amazing as are your bracelets! Really appreciate these suggestions. Patricia

I am discovering the benefits of polishing compounds and am amazed. I have taken many classes since 2006 but until I get in and get my hands dirty I can’t seem to learn the process. Hoping to have fun and do this in retirement soon.

Thank you for those great tips and information. I appreciate the opportunity to hear from you who have done this before. Patricia

Don’t confuse Rob and I. If you are thanking me for my comments and advice on shop safety you are welcome. It is a topic I will discuss all day long. I have noticed a great degree of similarity with our comments and opinions so it is easy to be confused as to who is which. You are likely referring to Rob’s shop. My shop is a quarter the size of Rob’s and I have posted no pictures of mine.

Don, for what it’s worth, I consider those cotton gloves to be quite dangerous.
In a production shop where I worked in the early 90s, they had a young man
training as a polisher. The old hand who’d been polishing there for several
centuries, used those gloves, so the new kid did too. He’d been there a few
months. Anyway, polishing a bangle bracelet one day, he did pretty much
everything wrong in terms of how he held the bracelet, and how he presented it to
the buff. Thee buff caught the bracelet, and the glove caught between buff and
bracelet, pulling it off… The bangle went flying, with the glove still tangled
around it. The the kid’s middle finger still in the glove. Surgeons were not
able to reattach it. In all my years in this industry, that’s one of the worst
accidents I’ve seen. A fair number of runners up also involve polishing motors.

Instead of cotton gloves, how about those leather fingertips, which look like
they are made by cutting the last inch off the fingers of light weight leather
gloves, or heavier ones with a leather inside and elastic backs. As these fit
only fingertips, they are much less likely to cause injury of something catches.

I take an evening jewelry making class. A woman who was familiar with polishing equipment was wearing gloves, and the glove was caught on the buff. While she didn’t lose a finger, her hand was badly damaged, and I had to drive her to a nearby hospital. Gloves are no longer allowed to be used while polishing.

We now use pieces of leather scrap to hold items being polished.

Polishers who work only on flatware and hollowware usually wear cotton gloves. They work with large pieces and so their fingers never get too terribly close to the buff.
Jewelry polishers don’t wear gloves, as they work too close to the buff for safety. Some wear rubber or leather finger cots, but no gloves.