Does anyone know of any good sources on heat treating
gems to bring out the colors? Now that I have a good kiln, I’d like
to experiment with some of my lower end stones to see what I can do
to improve color/clarity, but am not finding many specifics online,
just that it is done. I did see a show on the travel channel last
week where someone found some yogo sapphires and they were heat
treated for 3 days at 330 C or something like that…but what about
amethyst/citrine or aquamarine or even topaz? I read on one site that
beryls can give off toxic fumes when heated?

Any info would be appreciated.

I don’t think you can achieve any results with your klin. In most
cases heat treatment is not only a matter of the temperature but
also the composition of the atmosphere, ie. the presence of certain
gases will ensure color enchantment. also, different rough sources
will yield different results. if you have some semiprecious stones
it wont justify the investment, and if you have huge precious
stones, it wont justify the risk of destroying it. forget it i
say…

Jeanne : I will be interested in seeing if you different responces
than I got when I asked this question.To paraphrase: The people that
know won’t tell you and besides why do you want to do that. Are you
trying to cheat people by enhancing stones? Some of my answers where
off list some onlist but the above was the condensed replys. I too
had some Amethyst I want to play with. It was a lower grade from
California and I wanted to see what could be done. In researching
this issue I am finding that it is more than just temperatures and
time. Some stones seem to require different gasses in the
environment. Normal air might cloud the stone or burn it but Argone
might give you a stable color change. I too have not found any
specifics and have even searched about 300 books that supposedly
gave this kind of info. All to find that they did not give the info
claimed. Good Luck and if you do fing something please share it with
me either on list or offlist.

Jeanne “Does anyone know of any good sources on heat
treating gems to bring out the colors?”

Several years ago someone gave me a book “Gemstone & Chemicals: How
to Create Color and Inclusions” by George W. Fischer, Ph.D.,
Published by South Bay Reprographics Inc., © 1991. Though I have
not experimented with anything, this book even shows how to create
inclusions in clear Agate. For myself I will stick to natural stones
whenever I can.

I don’t know anything about this (as someone said, "I hate when they
say that!!), but out of curiousity I went looking and found this:

It’s a school in Bangkok that teaches heat treatment, among other
things - mostly corundum, I’m afraid. You guys might like to poke
around for tidbits, though, plus there’s a book available.

Part of the reason there aren’t many responses is because heat
treating gems is not an exact science. All stones have
’personalities’ as well they don’t all do the same thing under the
same conditions, which makes sense if you think about it. If they
all did the same thing then every amethyst would have the same
purple/blue/red tones, all sapphire would be the same, no zoning,
etc…

I also have to agree about the reasons behind the desire to do heat
treating of It’s one thing to experiment for the
’science’ aspects it’s another to do what many are doing with
beryllium treatment which is extremely difficult to detect without
special equipment (last I heard). Not to mention the health hazards
associated with the different gases, etc.

Anyway, if you want to mess with sapphire/corundum you’re going to
need special equipment because that won’t do anything below 1800C,
and even then you’re not guaranteed anything because you don’t know
if what you are playing with has already been run through some kind
of treatment.

I hadn’t seen this discussion before, but am familiar with heating.

To begin I’d say we treated tanzanite in the kiln about six months
ago. It is simple if you have the material to start with.

Corundum, or ruby and sapphire, require higher temperatures/pressure
and yes different gases which create the reducing or oxygen
atmosphere. You can do a simple experiment with the correct materials
which again are hard to purchase because why sell them if you can
heat them and get twice the price. Anyhow, the experiment begins with
a reducing atmosphere, block of coal maybe, and a jewelers torch.
Torch the stone, while submerged in coal, glowing red for several
minutes and let cool. The result is crude un-controlled method of
heating in a reducing atmosphere. However take caution because
cooling at this rapid decrease in temperature will cause fracturing.

Controlled ovens cost $20,000 or more and exact conditions will
remain a secret. Does Coca-cola give away it’s recipe? Of course not,
or it would not remain Coca-cola!

thanks…I may try that…I’ve just got some lower end stones that
came in mixed ebay lots that I probably won’t use as is or are pale,
so thought I’d play with them…some sapphire/ruby but also small,
light tanzanites, pale aquas and muddy/grayish amethysts or pale
citrines…so I thought it could be fun to give it a try now that I
have a kiln for casting. Don’t suppose you could give me any target
temps on the tanzanites or quartz? I’m guessing it’s a slow heating
so as not to fracture these stones. I found a reference to 400-450 C
for aquas. I’ve got a programmable furnace from Rio…not good enough
for the corrundum, but should do to bring out some color in the
others! I’ve probably got a couple hundred smaller, light aquas I’ve
picked up on ebay for pennies a piece (pulled them out of mixed lots
by using a chelsea filter)…but most are rather pale. Since I
don’t currently pay anything outside of rent for my studio (electric
incl), it would be cheap to play with heating them.

thanks for the reply!
Jeanne

I have played with heating up stones for many years in my kiln. It is
untrue that you need ‘gasses’ for color changing stones. I have
heated, over the years, with some success, tanzanite, aquamarine,
amethyst, and recently tourmaline in my normal casting kiln.

I also have heated many other stones with spectacularly bad results.
Amongst others, larimar, (went white) lavulite (went brown) smoky
quartz (trashed.) Aqua (white), citrine to try and make it lighter
(ha ha).

Just a few weeks ago I took some dark olive green tourmaline and in
a fit of lethargy put some in the oven… I think it is Zimbabwean
material and it had already been very badly cut. (faceted) It was
lousy stuff, completely un- sellable. Complete stinkbug stones. The
material is clean though. That’s best to put in an oven. Clean mat=
erial. Although, I have put stuff in the oven that had fractures and
did not get more badly fractured. (even though the color was not
necessarily better)

So this is how I got it to a much better color in the tourmaline. So
far I took a stainless steel egg cup and filled it up with ‘satin
cast’ casting powder. Same stuff you cast jewellery with. Then I took
a tourmaline and cleaned it with alcohol and pushed it to the middle
of the egg-cup. Tapped it down firmly and put it into my oven.

300C. Leave it at the temperature for about an hour ( it is only an
egg cup), then I take the egg cup out of the oven and let it cool
outside until room temp. I don’t care for this million hour cooling
down bit, because I am only testing, and the material sucks, so I can
afford to trash it.

500C Some change, (yay!) a little bit lighter. I use a control stone
of the same original colour to check. Then I go up into 50C
increments At 550C was my best color, noticeably lighter. I went to
650 with this stone, and there was no more color change so I called
it quits. At least it will be sellable after have I recut it. With
disclosure, of course.

Then I took another one and did the same thing some days later. This
time there was no change in colour at all. This is typical. Even from
a similar source, or parcel from the same mine, stones react
differently to heat.

So I decided to increase the temperature in hundred degrees until
something DID happen. This is not something I would normally do, but
I
just wanted to see how high I could take a heat sensitive stone.

At 700C, nothing had happened to the dark olive green colour. And I
was not even careful to cool it down other that putting the egg
cupout side the oven 750C Nothing. (Most low RI stones don’t go
higher
without major damage…) I certainly did not think a tourmaline would
go so high.

At 800c it died. It became brown and looks a bit like petrified wood
Ok, so that’s extreme. I have never heated tourmaline to that
temperature and I wanted to see how high it would go…

Most stones I have played with are in the 300 to 550 maximum Some
work, most do not. But that does not stop me playing around. About
ten
years ago I heated tanzanite rough to 400-450C. Of the three stones,
two went better and one died. I think I used building sand in a
crucible then. In a controlled situation, I will let the oven cool
down to room temperature before I take the stone out. This cycle can
take many days, so it is good to record what you do. Sometimes, I
just
put a piece of stone into my casting cycle, just to see what happens.
I take it out before I go too high, like over 550C.

A lot of technical can be found on the web, especially
in related fields like synthetics although specific is
scarce. (Temperatures, time etc)

One future test I want to do is take some clear enamel (frit) and
embed some fractured Tanzanian ruby I got in a melting crucible and
heat the hell out of it, just for fun

A book I would love to own is Kurt Nassau ’ Gemstone Enhancement. History, Science and State of the Art

And no, I don’t want to ‘cheat’ anyone. I am just interested in the
subject. 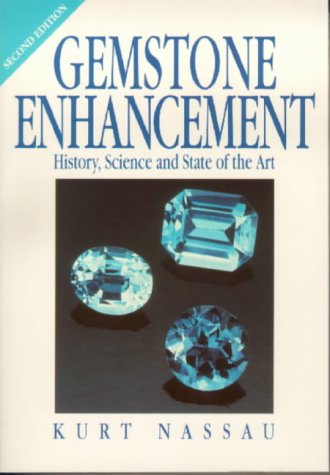