Big Bart’s a comin’ down the street. All is scamperin’ fer shelter.
His guns is cross-hatched acrost his belt. His eyes is blazin’. His
mouth be down-turned an’ his look is meaner’n a skunk in a holler
cornered by an ol’ wolverine. Nobody don’t mess with ol’ Big Bart if
they knowed what’s good fer 'em.

This brings us–of course–via a path so logical as to defy
description–to Charles V, Holy Roman Emperor, King of Spain, and
Archduke of Austria. Was his furrowed brows as mean as thems of ol’
Bart? Maybe. In full armor he was a sight to be feared. Did he have
the eagle-eyed shootin’ ability of ol’ Bart. I am thinking yes. How
about his weaponry. Was it equal to that of ol’ Bart’s?

Ah. Here is where I have to say no. It was not equal. It was superior
in every way. Ol’ Charlie. he was no slouch. He was a pusher. Listen.
if your mother was called Joan-the-Mad you’d scamper away as fast as
your royal legs could carry you too. Charlie was fifteen years of age
when he assumed rule over the Netherlands. He was sixteen years old
he became the sovereign of Spain–together with his nutso mom–and he
couldn’t speak a word of Spanish. A guy like that. ain’t no ordinary
weapon out there that’s gonna satisfy his ego.

So along comes a master gunsmith named Peter Peck. (Probably a cousin
to Peter Piper who picked a peck of pickled peppers). Peter Peck was
a brilliant gunsmith gifted with enviable mechanical ingenuity. He
was an elegant designer. So Peter Peck picked a pistol for pretty
Charlie. He etched it and gilded it and had it decorated with emblems
of Charlie the 5th if you please… the Holy Roman Emperor. Charles V
for those of you who you prefer formality. It had a wheel-lock
mechanism that was invented in the late fifteenth or early sixteenth
century. It had an automatic ignition system. It was the first of its
kind and Charlie was one of the first high rankers of his time to
commission a weapon such as this one to be made.

The NRA would have been proud of Pistol Packin’ Charlie. The Jewelers
of America would have been proud of this weapon. The National and
International readers of Tidbits (a jewelry ezine par-excellance)
will have been proud to have seen it once they see it. Boy and girl
scouts of the world with revel in delight when seeing this weapon.
Poles dancers will stop their pole dancing so entranced will they be
at viewing this beauty for. if you think about it. pistols is their
business. in an oblique sort of way.

Congress will stop in its tracks. Democrats and Republicans will hug
each other in amicable glee. Isis will cease cutting throats. (Well.
maybe not all of the above. Maybe not even any of it.) Ah … guns
like this one evoke curious dreams. And where there’s Peter Peck’s
Pistol. there’s always hope. So. Whaddya think? Is it weaponry. or is
it jewelry with a stretch? You tell me.

There is an image–you know where–available for your viewing
pleasure. Home page. http://www.tyler-adam.com. Scroll down. Left
side. Tidbits. Click.

For those as may be interested, this wheellock pistol is in the
collection of the Metropolitan Museum and can be viewed in very high
detail on its website. 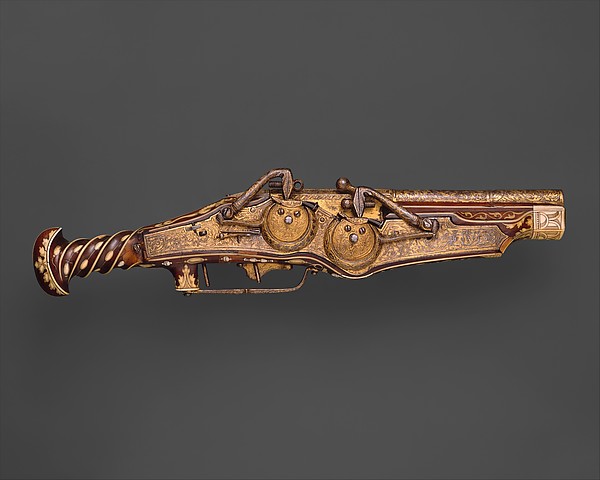 One of the earliest pistols, this firearm was designed and produced by Peter Peck, a maker of watches and guns. The two locks combined in one mechanism provided the barrels with separate ignition. Made for Emperor Charles V (reigned 1519–56), the...

Wow! Looking at the Met’s image with enlargement is really amazing.
Have no idea how the thing works or whether anyone ever fired it, but
what a work of art! Noralie