[Tidbits] Plique-a-jour and The Bat

Originally from the French. It meant" “Letting in daylight”.

It’s a technique using a vitreous enameling methodology which fuses
the material into the spaces of a wire framework on a temporary
backing. When cured… the backing is then removed… thereby
producing a translucent effect. This is a most difficult technique
requiring the utmost patience and the mental fortitude.

The failure rate using this technique is high… and there is a great
deal of strength required in order to enable the craftsman to
continue in spite of failure… never allowing his spirits to dampen
in the light of failure. If this seems like a dismal outlook for
those willing to attempt a project of plique-a-jour… let me say it
is no more dismal a challenge than climbing the Matterhorn
blindfolded with your hands tied behind your back. One needs little
more than a little bit of pluck, perseverance, talent, a bull-
doggedness in temperament, and the willingness to leave hearth and
home on a shelf while one pursues one’s passions.

I have this image of a bat. It is an Art Nouveau piece made of base
metal with plique-a-jour enameling. Presupposing one finds bats quite
endearing… one would be quite attracted to this necklace and one
would surely vie with might and main to aquire the piece to wear
about one’s neck at one’s next gala event.

It was worth… back around 1996… around $4000. That’s about $5500
in today’s market. Not bad for base metal. If one has a great desire
to learn this technique-- and who doesn’t–it seems that Benvenuto
Cellini (1500-1571) had written quite thoroughly about the process in
his The Treatises Of Benvenuto Cellini On Goldsmithing And Sculpture

.
The year… about 1568. Forget that business about yesterday’s truths being tomorrow’s
lies. I think getting the book is worth a shot. I’m quite sure it’s
available at any local neighborhood bookstore whose existence dates
back a few centuries.

As to bats… plique-a-jour and otherwise… there are many truths
about this creature. To the Irish… the bat is a symbol of death. To
the Chinese… it is a symbol of long life. Dry the heart of a bat…
powder it… and carry it in your front pocket… and it will deflect
a bullet. To attest to this as fact I am here to assure one and all
that I have some bat powder in my front pocket and have never been hit
by a bullet. Ergo… it works. There’s a superstition that says that
a bat killed with a gold coin will bring good luck. The question here
of course becomes… how the devil does one go about killing a bat
with a gold coin. What does one do? Go here battie battie battie…
and when the creature sidles over to you to be petted… you bash
it’s skull in with a gold dollar? I have trouble envisioning any
degree of success using this method. I would wish anyone who wants to
attempt this all the luck in the world … which of course one can
not really have prior to a successful endeavor.

One last myth which makes more sense than all the others combined…
so much so that I tend to believe it is truth rather than myth. It
seems that bats fly about at night simply to evade creditors. Nothing
strange about that… I tend to behave in a similar manner.

That said folks… by a show of hands… who want to see The
Plique-a-jour Bat Necklace? Wow. That many. Well then… go for it.

For those of you who are new to this thing called Tidbits…may I
direct you to my home page at http://www.tyler-adam.com where you
will scroll down the left side menu till you get to the area that
says Current Tidbits… click it… and you will see represented on
our pages a bat necklace with plique-a-jour enameling.

And there ya have it.
That’s it for this week folks.
Catch you all nex 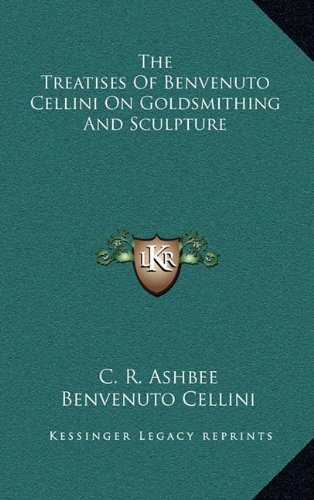 The Treatises Of Benvenuto Cellini On Goldsmithing And Sculpture

To bits about the bats Tidbits – one is that the book in question
is available from Amazon and I doubt they have been on the internet
since 1568. But you might hurry if you want one - it’s in short
supply.

And the other thing is an observation. It is obvious Benjamin is a
true goldsmith at heart. When he conceives of killing a bat with a
gold coin, can he imagine any method that projects the coin at great
speed, risking both not killing the bat and, more importantly, losing
the coin in the enveloping darkness? No. He imagines taking the coin
firmly in his hand and giving the bat a bash. He might miss the bat,
but he retains the gold coin in his hand. I true admirer of the
yellow metal.

Another of Benjamin Mark’s delights.

What a gorgeous little creature. He can come home to live with me any
day!