I just finished a six month project in the Steam Punk genre called
the Palindrome Cannon.

Fabricated out of brass, copper and silver.

Here is a picture: 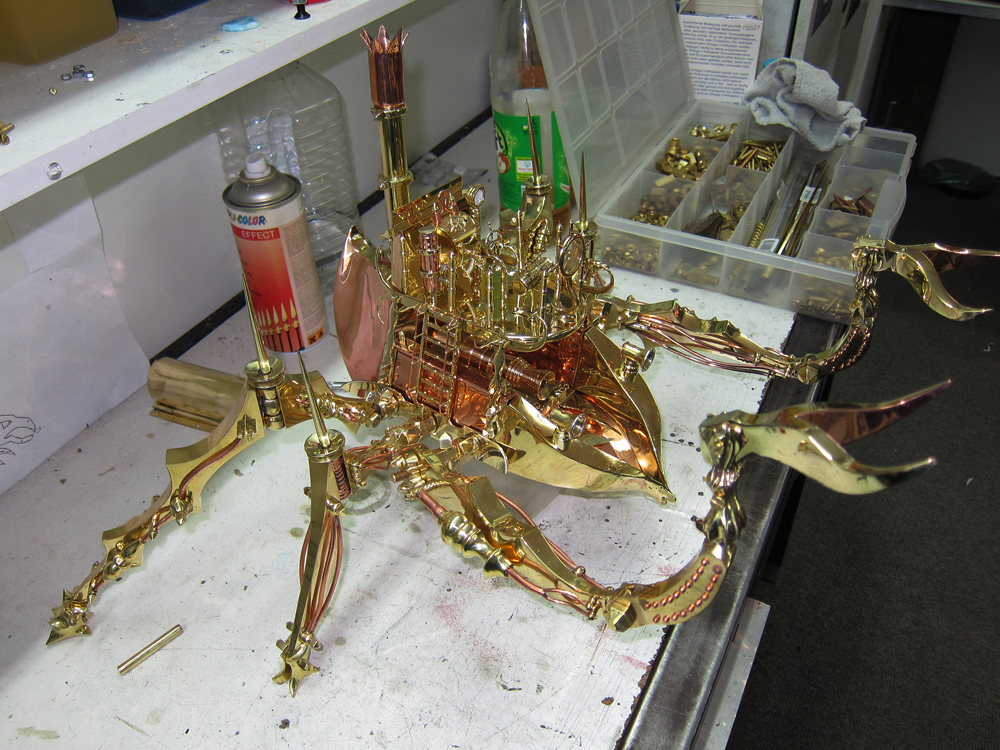 I wrote a blog on it.

Hans, you are frigging amazing! (makes Wayne’s World “We are not
worthy” obeisance.)

The Steampunk World’s Fair was just last week. I don’t suppose you
showed your work there?

Anyway, I’ve got a few friends who are quite active in the Steampunk
community. I’m going to forward your blog to them. Maybe they know a
gallery that would be interested.

Absolutely beautiful, but I bet it’s going to be a bitch to keep
clean. CIA

Hans’s work is amazing. We’ve got to help him get more attention for
his amazing work. This new project is a perfect fit for boing boing,
I just filled out their submission form, here:
http://www.ganoksin.com/gnkurl/ep80aj

and I suggest you do too. Hans says he’d like to show this work in a
gallery, the power of Orchid could help bring him the attention and
eyeballs of a gallerist.

Incredible. I will find out what a Palindrom Cannon is, but I sure
now abeautiful piece of art when I see one.

Ya’ll gotta’ see this. Awesome is an inadequate expression. Rock on
Hans! Judy in Kansas, where the iris are magnificent and the peonies
have burst into bloom.

Firstly, let me thank all the people who posted and commented on my
Palindrome Cannon.

Very cool to receive such nice feedback from one’s peers.

And, for that matter, the constructive criticism I received via
email.

All is much appreciated.

Charles Anderson mentioned that the piece would be difficult to keep
clean.

I think he meant tarnishing though.

This is of course the down side to working with base metals or
silver.

I researched this subject extensively.

I was going to have the whole piece gold plated, but I decided not
to because I feel the colour looks a little tacky.

Sort of looks a little ‘chrome like’ if you get my drift.

So what I used was a mixture of Zapon (a locally made hard lacquer)
and a high gloss standard lacquer.

I thin the mixture down with nitro cellulose thinners and dip the
entire piece in it and the hang them up to dry.

This was not my first choice, however.

There is a product available in the USA and the UK called Incralac
http://www.ganoksin.com/gnkurl/ep80ax

that according to many sources on the internet is the finest
material to cover copper and brass to prevent tarnishing.

Unfortunately this product is not available in Germany and to ship
it from the said countries was about six times more expensive than the
actual product.

I thought I would mention this, since the subject comes up on Orchid
regularly.

And it is for what it’s worth, since I have not personally tested it
out.

Wow. what a project !. I kind of feel like a turd for posting
anything besides superlative remarks, but since Meevis, Hans has
more or less welcomed any and all feedback, I’ll go ahead anyway.
Overall, the thing is a little too busy for my tastes. I’m more of a
minimalist now, though precision and detail are appreciated, and
there’s certainly an abundance of both in this one. It’s sort of
like a whole, amazing array of beautifully designed and crafted parts
come together in a way that (again, to my personal tastes and
preferences) is slightly less completely awesome than I want it to
be, looking at it’s development from early stages into final product.
Really though, that’s a trivial complaint, if it even qualifies as a
complaint. I am hugely impressed with the overall scope of vision and
execution, just not 100% in alignment with the style. Still an A++ by
any reckoning.

I have absolutely no problem with constructive criticism, and I also
completely agree with you.

The danged this is far to busy, there is far to many thingi’s on it.

This phenomena I shall call symmetrical project creep.

Namely, There are six legs.

So the first back leg gets say six objects added to it.

The lock is set and basically, to preserve a balance, twenty four
objects of various shapes have to be added to all the legs. (I speak
in a general manner)

Now, because there is a certain “density” of objects, the whole
piece has to maintain that density balance.

And that causes a cycle of perseverance, in as much that there is
now so much time spent on the piece, that it is not possible to
abandon it without significant loss of time and effort.

For me, it’s better to complete something not as perfect as one
would like than have an uncompleted piece lying around. (and I have
PLENTY of those)

Some might say that the solution is to draw out the entire project
before starting, but this is seldom feasible, because what looks great
in a drawing often does not work in the three dimensional
interpretation.

But you are right.

Even live and in front of you, it is far too complicated at casual
glance, and therefore I think it has failed visually.

I think it only looks too busy for a photograph.

Taking all that detail and flattening it onto a plane, Just can’t do
that Justice.

Which is why photography is an art of it’s own.

This is so true, Hans! That’s why CAD modeling is such a useful
skill for any material artistyou can actually see your creation from
all angles, and view different options/proportions just by pressing a
few buttons instead of having to constantly redraw the object! I use
the 3d program trueSpace for designing (as well as CorelDraw, which
is 2d) and it really helps tremendously. I often scan in my hand
sketch as a starting point.

To which the Shelton replyeth

Howdy, Hans. That is a weird phenomenon, one I’m familiar with. I’ve
never concieved or attempted anything close to the complexity of
your cannon, but the somewhat minimalist aesthetics I have now have
evolved at the expense of some of my love of complexity. I haven’t
made jewelry for ages, but I can use the geometric wire sculptures
I’ve done (some shown on sheltech. net) as recent examples of things
I’ve had to work to keep simple, so their clutter doesn’t become
counterproductive. There’s not a lotof artistic creativity involved
with these, but that isn’t even related to what I’m getting at.
Nature has provided an insanely complex array of possible geometries
to use, but I found out that about a dozen or so of the simplest
polyhedra are the ones that offer the most useful arrangements for
what I’m doing. Not that there aren’t wonderful possibilities for
starting with more complex polyhedra, but going that route, I have
to do less things to them, to keep them from becoming too busy.
The"forest for the trees " kind of thing.

I’ll always remember one piece I saw at the Denver museum of Art
many years ago. I can’t remember the type of object it was, some
huge, religious thing from 16th Century Tibet (?). It was probably
four feet across and two feet tall, built like a stacked, graduated,
layered cake. It was made of silver and semi-precious stones, full
of intricate wire and inlay work. It must havetaken a team of twelve
years to create, and somehow they had pulledoff that elusive,
perfect combination of intricacy and design, though I think it might
have just seemed busy to some people. I knew what I was looking at,
because I was a smith, but my friends didn’t have thesame eye for
it, being in more of a vague state of awe.

The cannon is still a marvel by almost any standard, and I couldn’t
say it failed, but I’d agree it doesn’t add up to being greater than
the sum of it’s parts as much as I know you would have liked. It is
a strange thing, because up close, the pieces, and parts of the
whole, work at extremely high levels, yet all together assembled, it
misses the mark slightly. Again, I don’t quite feel comfortable
complaining about something so skillfully and artistically done, but
I can tell that you’re disappointed forthe same reasons. Live and
learn, eh?. I do know what it’s like to put a whole lot of work into
something, to have huge expectations, and thenthose are not met. I
do also agree it’s better to carry through ; like Isaid, it’s still
an incredible piece that you can be immensely proud of, and you
probably will feel better about it as time goes on. I knowI get
burned out sometimes, tired of looking at or hearing something,
wondering why I even bother. Some time later, I get some distance
and perspective, and I’m more able to appreciate what I’ve done.

It’s like that with music too, and I have the ‘advantage’ of NOT
beingan accomplished composer or virtuoso guitarist (this is some
seriousspin doctoring, as you’ll see). I can spend months writing a
reasonably complicated (to me) piece, and not have to worry that
it’s too busy or too cluttered. I’m simply not technically good
enough to write play a cluttered style. I do get to be meticulous
about writing something exactly the way I want it to be, and the
litmus test is whether or not somethingsounds good running through
my head all the time, or over the years. Butthese are not terribly
complex pieces. The very best players sometimes don’t do it for me
just because they are too complex; too many notes too fast, too much
fancy fretwork and not taking any extra milliseconds to enjoy it or
let it be.

Take care, and I’m sure I speak for most of us when I say we look
forward to your next adventure.

I left one thing off, which I just read from Christopher Lund, so I’m
not alone in thinking the piece is probably only “too busy” in a 2-D
photo, and is probably magnificent in real-life 3-D.

Dar, Hans - Gods bless you both! Your thoughts and comments on this
piece are EXACTLY the sort of constructive design discussion from
which we can all appreciate and benefit.

Because neither of you posts that often, your contribution becomes
even more valuable.