I am setting up a small casting studio and wonder what type of
material I should use to protect my 8’x4’ table that I am placing my
Lucas centrifugal caster.

My first thoughts are something similar to a chemistry lab bench,
but if I drop my flask on the table, I don’t think something like
soapstone would hold up to that abuse.

Maybe thin metal sheeting - copper or steel? What about something
underneath it to protect the wood table from scorching due to heat
like an insulating mineral blanket?

Or perhaps some kind of fire brick in tile form? Off cuts of a
granite countertop?

Thanks for your insight!
Ron

Don’t have any suggestions about the best tabletop material. But I
dohave a suggestion about how to avoid dropping a flask. I believe I
got it from the Tim McCreight book on casting, and that is hold the
flask in a horizontal position when using the tongs. That way, it
cannot slip though the tongs and land on either your toes, or
another combustible material. Alma 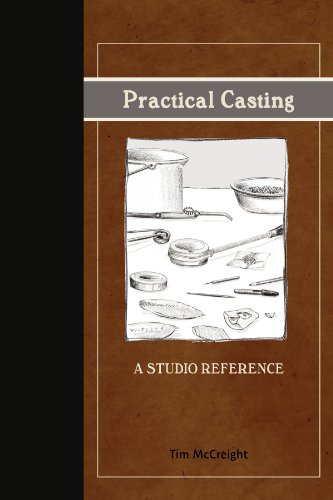 do you want to keep the table for other uses?

the lab benches in the chem dept @ uni used to be thick wood because
while it will char it’s pretty robust, tough and retains a lot of
strength even when mostly burnt. as long as appearance isn’t high on
your agenda.

My casting setup consists of vacuum casting machine, kiln and gas
fired crucible furnace. all sitting on a wooden bench with the top
covered by a sheet of fibre cement. In addition I have placed a
ceramic kiln shelf in front of the casting machine to rest hot
casting flasks and crucibles and the crucible furnace and associated
gas burner sits on a thick slab of aerated concrete

Since you will be using a centrifugal casting machine presumably
with a protective shield you will be melting metal with a torch in
the crucible in the machine cradle, the only heat protection you will
need will for the benchtop. Fibre cement sheet of 6mm or greater
thickness can achieve this except for a resting place for your flasks
after casting which may still be as hot as 400C when you remove them
from the casting machine before quenching. I have kiln shelves
available from pottery suppliers excellent for this being capable of
withstanding 1300C and some thermal shock. In my case they have
handled both freshly burnt out crucibles (up to 500C) and crucibles
of metal (up to 1200C).

All the best
Jen

At one point or another, I’ve done most of what you suggested.

Stainless or aluminum sheet would work just fine, copper’d be pricey
as hell, and straight steel would rust, but be fine if you painted
it.

The thing about the table is that you’re not planning on leaving
anything hot on it, so you don’t need to worry about the wood
underneath, unless a hot crucible sits still on the surface for more
than 5-10 seconds. Spatter from a blowout or missed pour will cool
off too quickly to do much damage, unless you’re doing huge pours.
Steel takes a fair bit of energy to get warm, and it doesn’t
transmit heat nearly as fast as the non-ferris metals do, so you’ve
got more time than you think before things start to fry. Aluminum
and copper would transmit much more quickly, as well as reacting
with the metals you’re most likely to spill.

For an ingoting area, I would lay firebrick on top of your metal
shield, because you can get large slugs of molten metal there.

For the centrifuge, I’d absolutely, positively, get some sort of
shield to go around it. Centro’s don’t throw the spray down when
things go wrong, they throw it out and away. Which means you really
want a containment wall to catch all that expensive, fire-starting
metal. The Frei’s have one, and I expect everybody else does too.

My machine lives in the top of a 55 gallon drum that I turned into a
combination blast shield/casting machine/ballast system. (The
traditional american base for a centro was a 55 gallon drum 3/4 full
of concrete, with the cento bolted onto the top of the concrete, but
still a foot down from the top of the drum. Weighs about 600 pounds.
Which means that centro is NOT going to vibrate itself…
anywhere at all. The problem is that it weighs 600 pounds like that.

Predictably, mine is fancier.

55 gallon drum, with the bottom 2/3 of a heavy plastic 55 gallon
drum liner. (I was living in a place with an industrial plastics
company that had this stuff on hand, and available as seconds, for
almost nothing.) (US Plastics, Lima, Ohio.
http://www.ganoksin.com/gnkurl/ep81so

It’s been nearly 20 years, so I can’t remember exactly which of
their containment tanks I frankensteined, but you get the idea. )

So I’ve got about 35 gallons of water in the bottom of the drum, in
a plastic tank, with a pair of faucets to let the water in and out.
3/4" plywood deck on top of the tank, with the centro bolted into
the middle of the plywood deck. In use, with the tank flooded, it
weighs about 300 pounds. Still not going anywhere, especially since
the water acts as a tuned mass damper, and actively works to
counteract any vibration from the centro. The truly wonderful thing
about it is that when I move (which I did a lot back then) I can
dump the water, and suddenly the thing weighs. not much. Just the
weight of the drum, basically. Not ‘pick it up and walk away with
it’ light, but nowhere near 600 pounds of concrete. You can also put
a slab of plywood across the top of the drum when you’re not using
it, and turn it into a table. Very handy.

To be honest, I don’t remember if I shielded the top of the wood
with anything or not. That particular centro didn’t make the move
out to California, so it’s been sitting in storage back in Ohio for
years. One of these days I’ll settle down and get the rest of my
crap. (Which is why I scratchbuilt a basic vac caster out here…)

Ah the joys of the Tenure Trail, once upon a time…
Regards,
Brian

PS"> to get back to what Ron asked about originally, I’ve put hot
flasks on offcuts of marble countertop with no adverse reactions. We
used them to shield the tabletops around the enameling kilns at the
Santa Barbara program. Never had a problem, and marble shops usually
have all sorts of random square-foot-ish sized pieces laying around.
Too big to trash, not big enough to use for much.

Not a bad idea, but wear a face shield the first time you put
anything really hot on any given piece. You just never know…

A simple solution would be to mount the centrifugal caster inside an
old metal washtub secured to the table top. Just be sure it’s low
enough to reach in and wind the machine. An added benefit: in the
case of the almost-inevitable blow0out, the metal may be easily
scraped off the inside of the tub"don’t waste it!

Tile backer board. It’s fairly inexpensive and can be easily cut. I
haven’t tried using it to solder on, but I use it for the purpose
you describe, heat shields, and working Delft clay. It appears from
the MSDS to be fairly inert and fireproof. Rob

I just have a 12-inch ceramic tile on my plastic laminate counter,
on which to set any hot flask that I want to put down. Oh, I also
put a 4" steel plate down on top of the tile. I don’t see why you
need a huge table to all be heatproof, unless you are welding big
railings on it like a blacksmith.

Wow, all sorts of great ideas from everyone!

The cement backer board Rob mentioned didn’t even cross my mind and
is a pretty easy thing to acquire at any big box home store.

The tip from Alma about holding the flask horizontal is excellent as
well. I will look for Tim McCreight’s book on casting since I have
heard good things about it from other people.

Alberic’s portable casting drum using water as the ballast is
brilliant. Not much more I can say about it.

For those that asked, the table I am using was converted from a
table I built for my son’s O gauge trains he used to play with. I
will need to secure it to the floor since the table hops around a
little when I trigger the Lucas machine - I did get the jewel model,
so it has the integrated splatter shield. So if things move around or
I come up with something better with all the ideas presented, I would
like to be able to convert it back for use with the trains at a later
date.

I think I will go with a combination of some 20 or 18 gauge
galvanized sheet steel to provide a metal barrier over the table top,
then use a kiln shelf others suggested as my hot work surface while
transitioning items between the kiln and the casting machine.

Thank you all for the feedback!
Ron

Cement board from a builder supply would be good. They use it under
fireplaces, you can cut or with a circular saw with a diamond wheel
or just get a small piece.