I’ve just recently started stringing pearls and other materials on
silk, but seem to be having trouble with the silk stretching after
the necklace is strung. What techniques do people use to prestretch
their silk prior to stringing. Currently, I am using the technique
suggested by Rio Grande on their stringing video (running the silk
through the slots on the card), but that tends to abrade the silk
and doesn’t seem to be sufficiently stretching it. Any suggestions?

JoAnna, I’m not sure if that’s what you’re getting from Rio. I like
the Griffin silk on cards. I take it off the card, and stretch it,
18-24 inches at a time, by wrapping it around each hand and pulling
firmly. Then moving to the next section, until the full length is
stretched. You’ll know it’s stretched enough when it stops giving
under firm pressure and is somewhat stiff.

Once in a while the silk will break, but if it breaks under this
kind of pressure, it’s likely to break during knotting, or even
gentle wear, so be glad you didn’t waste your time using it. I
suspect the breakage is due to the dyes used, as some colors seem to
break more easily, and white almost never does.

Hi - I’m mainly a jeweler, not a bead person, but I do occasionally
string pearls on silk. I almost always dye my silk (with Ritt dye
which may not be the best choice), then when it is still wet I
stretch it by pulling it with both hands. This wet stretching
wrings the water out of the cord and also seems to take care of the
stretching that would happen later if I had used the silk straight
from the manufacturer.

If you use silk straight off the card and are knotting between
pearls, you can try to knot really tight. You can tell if you’re
knotting tightly because the pearls will not hang quite straight
because they are held so tightly by the knots on either side of
them. Then carefully pull the finished strand to stretch it so it
hangs straight. I found this tight knotting difficult with a
tri-cord knotter. I use tweezers to push the knot down hard against
the pearl.

I’m glad you asked this question. I’m sure there are bead experts
out there that have better answers than mine and we can await their
solutions to this problem.

Johanna - All of the techniques for coloring I have used
successfully. Hand stretching works great, or you can slightly
dampen the silk (after having threaded your needle) - then suspend
over a hook and put a fishing weight on the bottom. Let sit
overnight - will take out most the slack. Dina,
High-Strung in blustery Maryland

JoAnna, Others may have a more sophisticated way but I was taught to
string the pearls, beads, etc. and before knotting to hang the
strand on a doorknob overnight.

JoAnna: I use Gudebrod silk for most of my stringing. When doing
Pearls, knotting between each one, I do not pre-stretch. My knotting
technique is enough to keep the finished necklace from stretching.
When I need to stretch the silk, I use one of three methods depending
on how heavy the beads are and what type of wear and tear I expect
the necklace to get. 1. Put all the beads to be used on the thread
and hang it for 24 hrs. Most of the time, the project is where I can
see it and ever so often I will gently tug the strand and help with
the stretching process. This is good for light weight beads and
Gentle wearing. 2. I get one of Gerry’s fishing sinkers, one that
weighs twice the weight of the finished project, and again hang the
thread for 24 hours. This is good for the heavier beads and moderate
wear. 3. If knotting is involved, I use bonded nylon for the heavier
necklaces that will see a lot of use. If you have any questions,
please feel free to call me.

Joanna, when using silk for bead stringing and I know that the beads
are going to stretch the fibers, I hang the thread that I will be
using with a weight on the bottom of it prior to using it.

If using nymo (or something similar), I run the length of thread
through a warm curling iron to stretch the thread.

I learned from a book to stretch carded silk thread by attaching one
end of the thread (usually 6 feet in length) to a coat hanger, and
the other end to a small weight, and hanging it from someplace high
like a ceiling light fixture for a couple days. It always gets
noticeably longer and never stretches further after I knot it.

wetting the silk cord with clear rubbing alcohol - being sure that
the whole length of cord is thoroughtly wetted from one end to the
other. Then I suspend the threaded pearls/beads on the cord thus:
Clamp a clothes clip on the needle end and place it on top of a door
jamb so that the cord with beads at the bottom, hangs down beside
the door frame. The weight of the beads is usually enough to
stretch the cord. If the pearls are small and don’t weigh much, tie
on some additional weight. Dry overnight and then knot. You probably
already know to knot snugly to allow for some future stretching that
will naturally occur with time. The other thing is to use the
proper sized cord for the drilled hole diameter to make the knots
the right size. Hope this helps and I’ll be curious to see how
others do it, Judy in Kansas

Ritt is for cotton. Silk should be dyed with an acid dye. You can
buy them at better art stores, such as Pearl Art and Craft, or order
from Dharma Trading Co. or ProChemical and Dye. 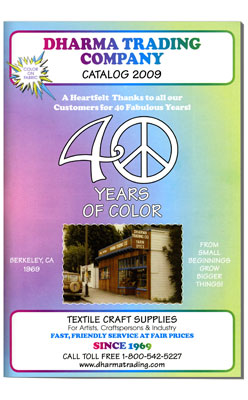 Dharma Trading Company has been a supplier of fiber arts supplies for more than 40 years. Request a FREE catalog with everything you need for home or small business crafting right from the website!

You can then heat set by steaming or using a microwave, but if you
use a microwave, it must be one that you no longer use for food.

Hi JoAnna, Actually, I can offer you a couple of different
pre-stretching methods. These are leftovers from my bead
designing/stringing days in the early 80’s, and are relatively
interchangeable, as far as results are concerned… The first and
best (but most time-intensive) is to thread your silk through a
large nut (or around the base of the head of a carriage bolt), tie a
knot around it, and unwind about four feet of silk. Next, place your
silk spool in a vise or C-clamp, place it/weigh it in place atop a
bookcase, and clamp a large Vise-Grip plier onto the nut or bolt at
the other end. Last, spritz the thread with a water mister, then
leave this hanging in place until dry, or coax it along with a blow
dryer.

The other (and infinitely less labor intensive) version is to thread
about 6" of beads (any material other than Garnet, since it’s holes
tend to be more abrasive than most others) onto your doubled silk
thread, then hold the “needle” end of the thread (not just the
needle) in one hand, the other two ends in the other hand, and yank
the thread straight a few times. If you’re doing this properly, the
mass of beads will whip around and around, centrifugally, thus
stretching your thread! “Back in the day”, when I’d used this so
regularly, I’d pre-stretch each strand as just indicated, then
re-stretch the same strand every so often, to assure that no large
amount of elasticity remained. Finally, I’d do it one last time
after the entire strand was complete, just to be sure that all of
the knots would lie properly, and the strand would drape evenly.

Of the two methods, I’d recommend the second one for general usage,
and the first, for use with beads over about the 10mm mark,
considering that the potential for personal injury necessarily
grows, exponentially, when swinging larger weights around like that.