I am curious if there is a small laser engraver that would specifically engrave a makers mark, metal content and several other bits of information on the inside of my smaller pieces. I find that traditional stamping will sometimes distort the piece and even create a weak spot where a bracelet, in particular, might fail over time due to stress cracking. I also have been known to just plain forget to stamp until it is to late. Thanks for any information…Rob

i have seen Buccellati pieces signed with a (long!) name, in teeny areas…looked like shaky hand writing🤔 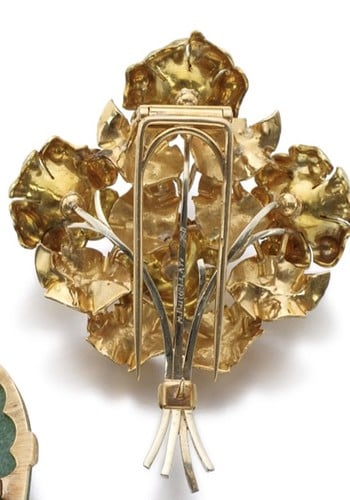 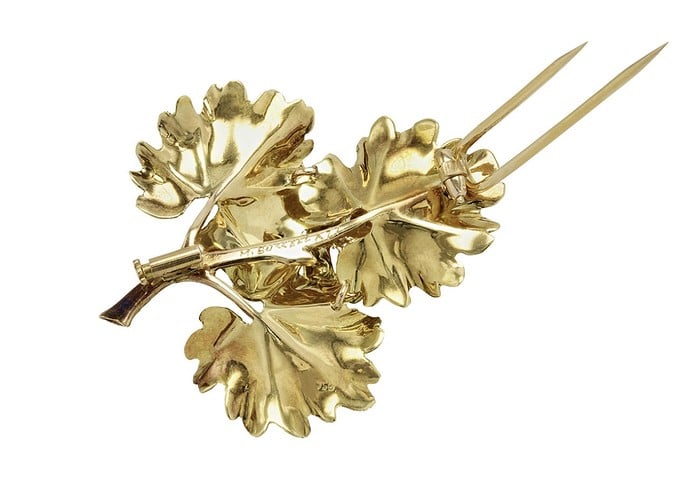 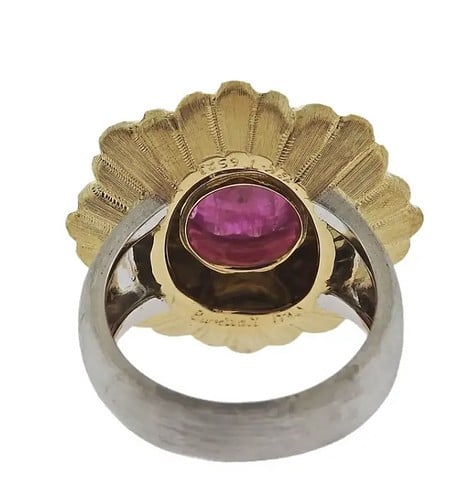 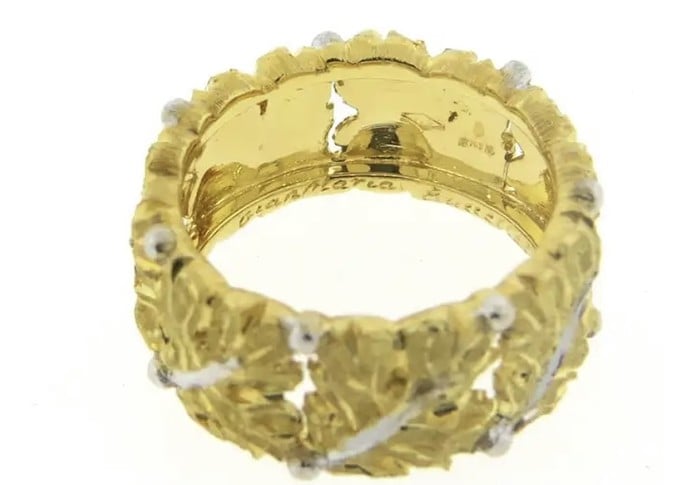 I used to use an electric pulse type engraver, but the results were horrible. For years I have used standard logo and other marking stamps and commercial .5 mm number stamps for serial numbers and sizes. Some of my pieces are just too small to survive being stamped this way, so I am looking for an alternative. My guess is that the pieces you posted are marked with an electric engraver, just a lot better than I can do. Thanks…Rob

What research I have done indicates that an entry level laser marking system is well beyond my budget. I have used an electric vibratory type engraver with a hard carbide (I think) tip in the past. It doesn’t work very well at least in my hands. I also have a set of micro stamp that don’t work well at all. Can anyone comment on or recommend a hand held device that does work well for small marking, possible a rotary type with a diaond tip? Thanks…Rob

I tried the rotary diamond bit routine, but found it unsatisfactory. Even the smallest bit skittered across the surface of the metal unless I pressed really hard. A carbide scriber did better, but it’s hard to make the initial “scratch.” Once you get going, it works pretty well, but does take a steady hand. I finally settled on a vibratory engraver. I found that starting out with the engraver set to the “right” setting didn’t work very well. After some experimenting, I learned that the better procedure was to do the whole engraving at a very light setting and then go over it a second time with a heavier setting. The light setting makes a shallow depression for the engraver to follow. In chasing, it’s like using a scriber to trace a design and then going over it with a liner.

Rob, Not sure if something like this would be helpful. I attached an x/y micrometer axis to my arbor press and attached a piece of brass to it that runs over the platform of the press as the x/y micrometer axis wont take the pressure. All the pressure is on the arbor press platform. I don’t have to hammer the punches I just put firm downward pressure on the handle. I modified the arbor by milling out a slot that my dies fit into and tighten them done with two set screws. I always had problems getting my lettering in a straight line but this does the trick. Three full turns moves the horizontal over to the next position and four full turns moves it down to the next line. 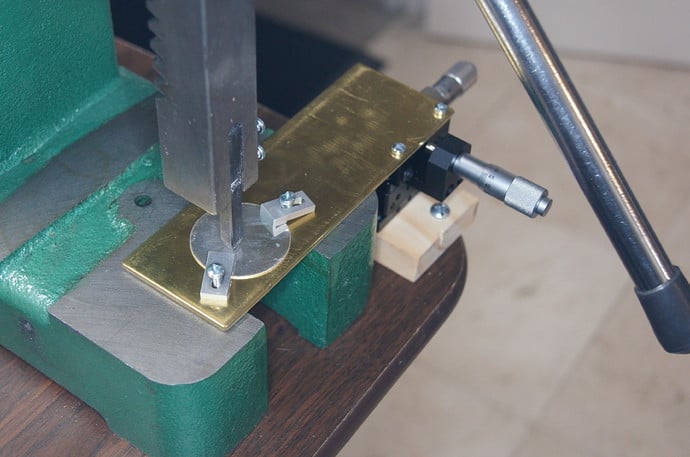 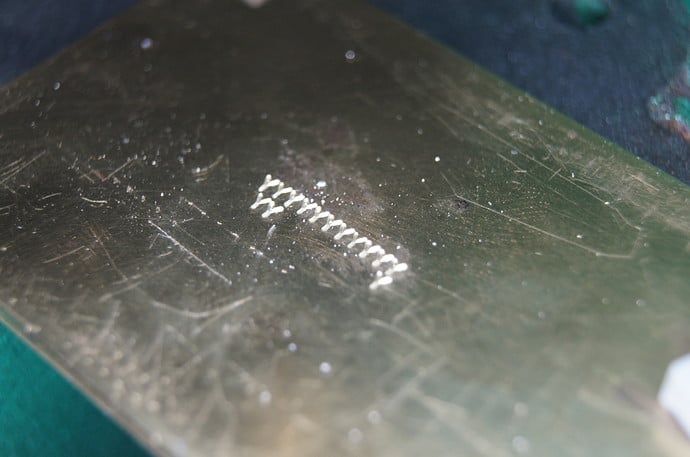 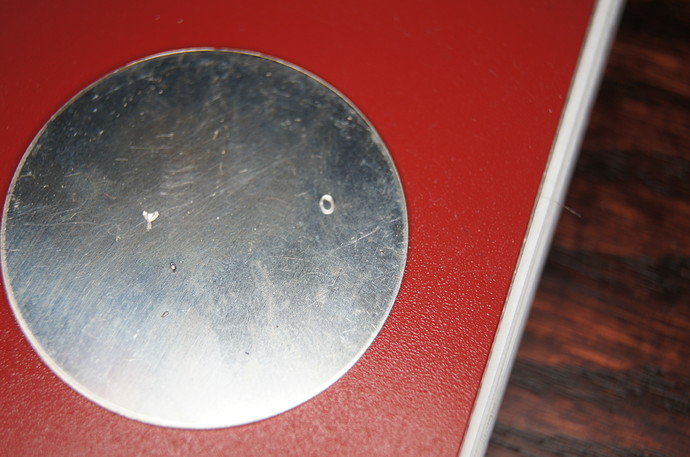 I actually have thought about mounting my stamps in some kind of confined way that will allow more control using a micrometric device. My problem is that much of what I stamp isn’t flat. As an example, a bracelet ready to stamp may have a triangular profile to the stock and the area to be stamped is diagonal to the axis of the bracelet. For years I just used .75 - 1.0 mm stamps and all was well. Now these stamp will damage some of my smaller work. Right now, since lasers are too expesnsive, I am concentrating on a good hand held electric diamond scribe of some sort. Thanks for taking the time to reply…Rob

you could also order a custom sized .925 stamp, as well as number stamps for your style/size coding…

comes with 3 nylon anvils
perhaps you could order. extra and then contour them to your basic strip profiles…

Details The jewelry marking machine is answer to the jeweler’s need for precise and fast marking of both rings and flat work. Sold in a kit with six punches (one each 10K, 14K, & 18K in both bent and straight) and with three nylon anvils to...

ok, now we are talkin’…!…this one is for curved/ ring shanks…

Details This new cam operated stamping machine lets you precisely and easily mark the inside of all ladies and gents rings. The ring stamping machine uses the same insert style stamps that fit into the popular jewelry marking pliers, and custom...

so…perhaps order, karat stamps and numeric set, from microstamp, to fit this type of machine press

All of these options are very interesting, but way beyond my budget. It seems to me that if you are fabricating, it ought to be possible to stamp something relatively flat and then include that in the construction process. This eliminates the necessity for stamping/marking things that are inaccessible or shaped wrong for stamping. Just solder a little tab in there somewhere if necessary. -royjohn

Royjohn…When I can I do just what you have suggested, but sometimes there just isn’t room using the smallest (.5 mm) of my stamp. The problem is that I like to stamp a serial number and size a well as the usual mark and content stamps. Thanks…Rob

Hi Rob,
j was perusing my Rio Grande catalog, and saw something that might be of interest to you…Beadsmith Micro Engraver 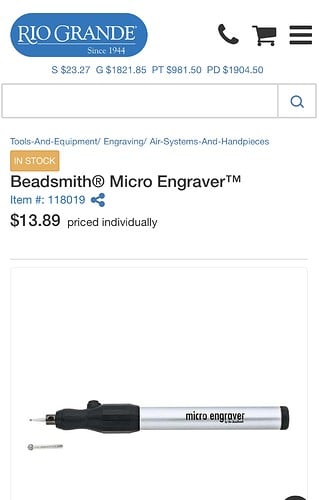