Hello all! First - thanks so much for all the help on my last
question -I can’t believe I didn’t know about Orchid earlier! Anyway,
I had a fairly simple question. Although I do not own the supplies to
lost wax cast, there is a company I usually send my wax molds in to
be cast with metals.

My cherry blossom tree is going to bloom soon and I thought it would
benice to try casting some flowers in gold, silver, etc. I have seen
many rings made with “real” items that were cast into silver - in
particular, octopi, twigs, and flowers. How would I go about doing
this? Is there any way they would be able to? I am prepared to buy
equipment.

I cast twigs, but they’re more robust. I’ve been wanting to cast a
bleeding heart, so I have much the same questions as you.

Sounds like a great project! When I cast an African violet bloom I
went from “on the plant” to into the investment in a very short
period of time – less than an hour. Equipment used was a vacuum
casting machine, a kiln and a torch (with the accessories that go
with that). It worked very well with very little loss of detail, but
boy was I on the clock!

Slow decaying items like twigs could probably be sent away to your
casting company to cast for you, but I’d imagine perishables
(flowers, tentacles, etc.) would have to be worked quite quickly
unless there was some way to encase them in a resin or lacquer
without losing detail or becoming, er, stinky in transit.

Curious to see what others say.

My first reaction to your question–beautiful but is it doable??? I
think that the blossoms may be too thin & fragile…

But if you want to try you can still cover them-maybe not with
melted praffin as the sealant but spray with a varethane or
polyurethane…Spray lightly, dry & build up layers…

I use to think a lot of organics weren’t possible but my college
students & I have tried successfully a lot of stuff, including some
bones…Make sure you sprue well and give it a try… What’ the worst
that can happen?–not a full casting… Try it with silver first…

From the sunny & warm skies of the Bay Area,
Jo-Ann Maggiora Donivan

Perhaps the original poster might be interested in electroforming
rather than casting, or electroforming to make a thicker and sturdier
model to be cast. The following articles are a good introduction: 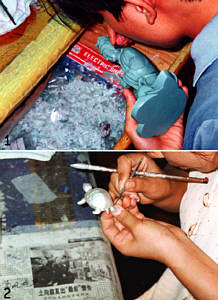 Electroforming is an old, established technology and, in its original form, it was a bit cumbersome to use. Read on the recent electroforming developments.

Electroforming is the process of controlling the metal deposit from an anode metal, through electrolyte solution, onto an electroconductive surface.

In over-simplified terms one would coat the blossoms with a special
conductive paint and then copper plate them. That could be silver
plated, or the electroformed object could be cast.

My Goodness, I haven’t done this kind of casting in decades. I have
done orchids, bleeding hearts, dogwood flowers, various leaves,
stems, a whole bunch of organic materials. Most came out just fine
though now and then something just wouldn’t cast. I did all of mine
by using a light coating of lacquer, burning out twice at normal
temperature for delicate items, and centrifugal. I did a few things
with steam casting and it worked as well.

That kind of casting is a lot of fun! cheers from Don in SOFL.

It’s not too hard to burn out and cast real objects the same as wax,
as long as they will burn away cleanly. But some things, like your
cherry blossoms, are too thin to cast well. You’d have better luck if
you dipped them in liquid wax first to build up their thickness. Then
you could invest them the same as any wax part. You generally have to
burn things like this out for a longer time, since they are more
resistant to combustion than wax is, and won’t flow out of the mold
the way it does. There will generally be some ash left behind as
well. Before casting, you’ll need to remove as much of this residual
ash as possible. If you melt with an oxy-acetylene torch, a blast of
pure oxygen can help. Some people use a shop-vac for this, but if you
cast hot, that risks starting a fire inside the vacuum cleaner. I’d
think that even a thickened cherry blossom would make a fairly
fragile ring; that might be something that would only be worn on
special occasions (like the Cherry Blossom Festival?).

Whether your casting company will want to do this for you is up to
them; most professional casting houses have a set, uniform routine
for all flasks, and don’t like to have to deviate from it for special
projects, but it never hurts to ask… If your casting people don’t
want to get involved with this, all you need is the normal equipment
used for dental-style lost wax casting: a front-loading kiln, a
vacuum investment table and bell jar, a torch for melting, some
flasks and tongs, and either a centrifugal casting machine or a
vacuum casting rig.

Twigs are simpler than flowers; a little spray lacquer will help to
seal the surface before investing, but you won’t have to dip them in
wax. I’m not sure about the octopi; the difficulty with things like
that is holding them onto the wax sprue tree, since hot wax won’t
stick to them. I’d make an RTV rubber mold of “squishy” things like
that, and cast wax positives instead. This technique is more flexible
than directly burning things out, and the results are usually better,
since you won’t be battling ash inclusions.