Anybody ever cleaned any Roman Coins…?

Some coins were devalued… Say from silver to silver washed
bronze…

I’m sure they dinked with the gold coins too…

I’ve started to study these things…

Pendant stuff, at least, with all of them Goddesses on the
reverse…

And he was less than a decade to become infamous…

I would try white vinegar.

I have cleaned antiquity peices like this before …mostly with
positive results.

I would suggest trying a little maybe on one of the "not so nice"
pieces and see how they come out! (this seems to remove alot of
tarnish and other types of buildups…I know that alot of mineral
collecters clean with vinegar also)

Handbook of Ancient Greek and Roman Coins by Zander H. Klawans is a
good reference. It sits here by my computer lol I have bought these
coins before. Resist all urges to use an ultrasonic cleaner.

If you must remove dirt to see the coin to identify use mild dish
detergent and water and if necessary a very very soft brush then dry
completely immediately, You can ruin the value quite easily. Most of
the coins that were clad in silver have lost the majority of the
silvering. Find one that hasn’t and do NOT clean it. The urge to
clean coins is very very hard to overcome. In most archaeology and
restoration the less you do the better.

If the coins have the hard crust obliterating the details then you
will have to learn the patience and determination of archaeologists.
There are ways to restore them via a many step bath. I will see If
any of my archaeolgy texts have more Good old double
major in college Archaeology/ Fine Arts. 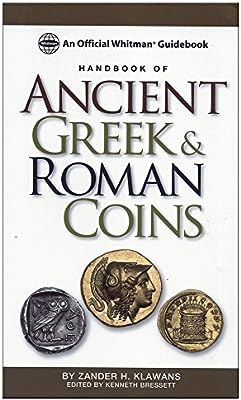 all I have ever read concerning the cleaning of old coins of any
sort that might have antique value is - Don’t. You could give them
a gentle wash in plain soap and water, even brush off soil type dirt
(most were buried before discovery) with a soft brush, but do not
attempt to use chemical cleaners or acids or tumbling or abrasives,
etc. The whole thing about genuine Roman coins is authenticity and
you wouldn’t want them to look straight out of the Franklin Mint,
would you ?

Now, if what you have are reproductions … jewelry away.

I got some cleaned and uncleaned ones from a dealer… The cleaned
ones have various patina on them… Recommended is soap and water,
and soaking in olive oil for the uncleaned ones…

Now, some of the uncleaned ones have what I swear is concrete around
them… I suspect one might expect that, if they were buried for a
millenia or so…

Soap and water isn’t making a dent…In some cases I can see some
of the detail through the concretion, in others, I’m not even sure if
I have slugs or whatever…

I will try the slow patient route…

I’ve been collecting ancient and medieval coins for several years.
Occasionally I buy bulk uncleaned lots and work with them.

Your best bet for cleaning any dug ancient coins is this :

In general, coins that are ground dug will have collectable value
based on rarity, not condition. In general, anything dug will be of
relatively low value and low condition anyway and anything that you
do to them in the cleaning process will be negligible to what water,
minerals, and fertilizer in fields did them over 2000 years. The
highest quality coins are not typically dug straight from the
ground, they were buried in something that protected them from the
elements (vase, jar, metal armpit coinpurse that was used by Roman
soldiers, etc.)

Roman coinage was devalued several times between AD 100 and AD 450.
In the mid-3rd century you have a proliferation of the silver washed
antoninianus. In dug coins, most of the silvering will already be
removed, but you should take care, just in case.

This may horrify numismatists, but I fired a bunch of those up and
quenched them in pickle a couple of times. A lot of time in the
ultrasonic after that. In my case, they were all bronze. I bought
them on Ebay for less than a buck-a-piece and I don’t feel the least
bit bad about my treatment of them.

Works for me, and you probably shouldn’t feel too bad about them.
It’s hard for you to do much more damage to them than has already
been done. On the odd chance that there was something interesting
and rare in there, you’d be best served to try not to disturb the
patina. Bronze coins are susceptible to a “rot” that will, over time,
eat the coin up.

Oh, man where can I get these uncleaned lots? I’ve heard of people
buying a lump of metal and dirt and delving into it- ocasionally
finding a bronze ring, etc, too. This would be a fantasy come true
for me!

They’re all over Ebay…as well as on the web… I suspect despite
the ad patter, that these are cherry picked for the valuable
stuff…even sorted as to potential cleanability…

Still…when you start fooling around with them, they get
interesting…

Why not try an electrolytic cleaning system. This is a copy of a
message from one of the ‘treasure seeker’ newsgroups which describes
making such a thing quite well… I made one a while back just
using an old ‘wall wart’ power supply and it works a treat…

“Cleaning, a good problem to have. Try a electrolysis system”

Well, you can get them on eBay, but you’ll typically pay more than
I’m interested in paying and the quality is far from assured. Your
best bet is to establish a relationship with a dealer. I’ve been
working with a couple for several years, first as a collector and
then later getting larger lots for jewelry/resale.

Coins are a collectible, so the prices are almost always set by
auction results (which means that prices are basically an expression
of what a motivated buyer will pay on good day at the auction.)
Know what you want and whay they’re worth – peruse a copy of Sears
"Roman Coins" or “Roman Imperial Coinage” to get an idea of what you
want first. Both of those publications will have a “ballpark” value
estimation for various conditions. You’d be well served to look
around on the internet and find more current sale prices as well.
Then find it and negotiate it.

If you’re just interested in bulk lots, go to the webpage for “The
Celator” and go to the list of links for dealers/etc
(http://www.celator.com/cws/dealers.html). There are several
dealers on there that sell uncleaned lots and even if they don’t,
they very often buy them and will sell them in lots as speculative.
Very often Wayne Sayles, Edgar Owen, and/or Classical Numismatic
Group have lots of uncleaned and sometimes VF-XF cleaned, attributed
coins for sale in large lots at prices that might surprise you. The
Romans were around for a long time, with a huge bureaucracy that
minted MILLIONS of coins, so most of them aren’t all that rare.
Just old.

I buy uncleaned coins in lots of 1000-2500 and usually get somewhere
around $.65-75 per coin, sometimes a little less and sometimes a
little more. Depends on the quality and what they paid for the lot
from their sources in Europe (most of dug coins coming on the market
now come from the Balkans). 50-60% are worthless (i.e.
unidentifiable) slugs, the rest are worth more than what I paid for
the lot and every now and then (2-3 times a year, maybe) I find
something really spectacular. I attribute the ones that clean up and
mount them or sell them with attribution. Very occasionally I’ll
add one to my collection to fill a hole.