Risk when casting Sapphires in place

Would you dare casting a clients sapphires into a jewelry piece ? My client wants an organic look where the sapphies are embedded into the piece… Im doing my casting myself and i have done similar before with a sapphire, and i know that it it is doable… However would you consider it a big risk when its the stone of the client?

Still fairly new to doing gemstone casting, but i know that gemstones should be flawless and of high quality, since those with inclusions tend to become milky or frosty during the casting process…

Any way to proper know if the stone can hold up ?

From what I understood, only synthetic stones would hold up. So I did try it. It cracked.
Wait til an expert chimes in here.

When you are “casting-stones-in-wax” remember these things:
Your stones must be perfectly clean. There must be NO residue anywhere on your stones.

Examine your stones prior to casting, the slightest inclusion will cause the stone to shatter.

After your casting of the stones, don’t drop your hot crucible into cold water. If you do, your stones will 100% crack, I’ve seen this happen!.

In my blog, I have an 8 page essay on how to prepare your stones prior to wax casting!

Hey Gerry! Thanks for you input. So avoid all stones with inclusions visible to the eye.

I have cast raw sapphires in place while casting in sand several times with no problem. They were definitely full of inclusions. However I have not tried casting in place with a lost wax method.

I’ve had great success casting sapphires in place: black sapphires which are the poster children of questionable gems that can hold up to casting heat.

A S L O W good burnout that at the end never exceeds 800F. You could probably go higher, but I would not go there. 3-4 extra hours in the ramp and burnout is a good idea. Never quench after casting. Patience is a virtue.

And the second which happened on my last casting. The cast metal, which in this last casting was sterling, FLASHED over the small marquise stones (some rubies in the same batch cast) I was using. I was extremely disappointed, because the piece was alot of work in the hand made wax. It was a pain to engineer the sprues.

I also did a test of various synthetic and natural stones from a couple of vendors to see what would color change or burn up. I made two matching strips and cast one so i have a permanent reference. 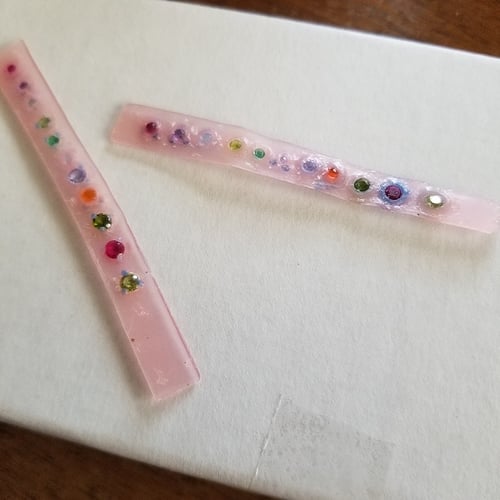 The stones i was used were on the small side: 1.5×3 & 2×4, in addition to 1.5 - 2.5 round. Natural blue and synthetic blue and black with obvious inclusions. Some spesserite and other garnets survived, some white zircons, all of the sapphires came out fine, everytime I’ve ever cast with them. I even had a natural emerald survive which just should not happen ever. 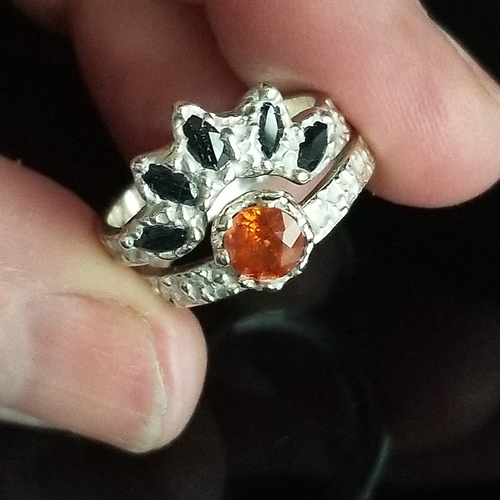 The inclusions are clearly visible in the black sapphires. The orange spesserite was set after the second ring was cast.

If you’re uncomfortable, you might offer to buy a comparable cut and carat synthetic stone as a replacement if something goes completely south. There are no guarantees, but it should be doable.

Without the client agreeing to the synthetic replacement and a hold harmless clause, I wouldn’t touch it though. Price the replacement synthetic into the job.

Thanks for the input, very informative with pictures!

So i assume in theory should be fine at 780 C, however as you say, maybe not a bad idea to have a back up plan if something goes completely south!

I suggest two very important notes for your casting.

Wishing you tons of patience in this process.
Gerry Lewy, on my iPhone

Hey Gerry! Thanks for the input!

Will do some test castings with a few of my own sapphires. Will show you the outcome when im done.

I nearly forgot a BIG # 3:
Keep your stones CLEAN. Just make darn sure that there isn’t any dirt on the stones. Especially when you’re putting your stones into your wax.