In the last two or three years a new batch of books on enamelling
have been published. And in all of them they recycle the same
definition of champlev(acute)e, in English sometimes called pit
enamelling).

Here’s what THE doyenne of the history of enameling,Marie-Madelaine
Gauthier) has written (very loosely translated) on page 27 of her
book “Emaux du moyen age occidental” (I can’t include the
diacritics).

Champleve is done on bronze or copper plaques which are 1 to 8 mm
thick. In contrast to cloisonne, you make pits (my words: on either
side of an imaginary line) by removing small bits of metal with a
burin: the intended metallic “edge” (le chant) is thus “raised”
(leve’), then removed when the cavities are filled with enamel…
The spelling champleve is the result of a false etymology.

(In French the first meaning of the word “le chant” is “the song”
and the second is “the edge” , and today is possibly
archaic, but was not during the 18th century when the term champleve
was coined. According to Gauthier, in another book, the coiner of
the word mistook the sound “le chant” for “le champ” meaning “the
field”).

What’s the motivation for writing this? See item 3 in tips from the
[Issue #128] Tips From The Jeweler’s Bench. I happen to like
studying the history of enamelling, and thought I’d pass this little
gem along.

Champleve (shahmp-luh-vay), meaning “raised plane” in French, is the
process by which a design is cut, gouged or etched out of metal to
create low areas for the enamel. After many layers of enamel have
been fired, the piece is stoned and may be re-fired to restore a
glossy finish. The unenameled metal areas may be waxed, polished or
plated. I cut, clean and etch many pieces at one time, but I fire
each piece separately. Each piece requires approximately 8 to 10
firings… 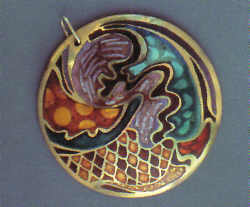 This article shows how to create champleve enameled jewelry as excerpts from the book: Enameling with Professionals by Lilyan Bachrach.