I bought a box of costume jewelry bits at a flea market, and found a
pair of vintage earrings in it. They are marked with a ‘3’ and a
dog’s head, and also what I assume is a maker’s mark of ‘GK’. From
what I can find online, this identifies them as Austro-Hungarian in
origin, 1866-1930 or so, and the ‘3’ means they’re 800 silver gilt.
They each have three amethysts which are bezel set. The bows on the
bottom have loops which tells me that they are each missing a dangle.
One of them has a broken ear wire which should be fairly easy to
replicate, though it will need to be soldered in place to match its
twin on the other earring.

I’m confident that I am capable of repairing these, but since I’ve
never done repairs on something this old before I would like to know
what the lower dangles would have been. Pearls perhaps? Also, am I
killing any antique value by doing a repair? I wouldn’t think they’re
highly valuable in their present state in any case, but would like
some second opinions before going ahead with a repair. 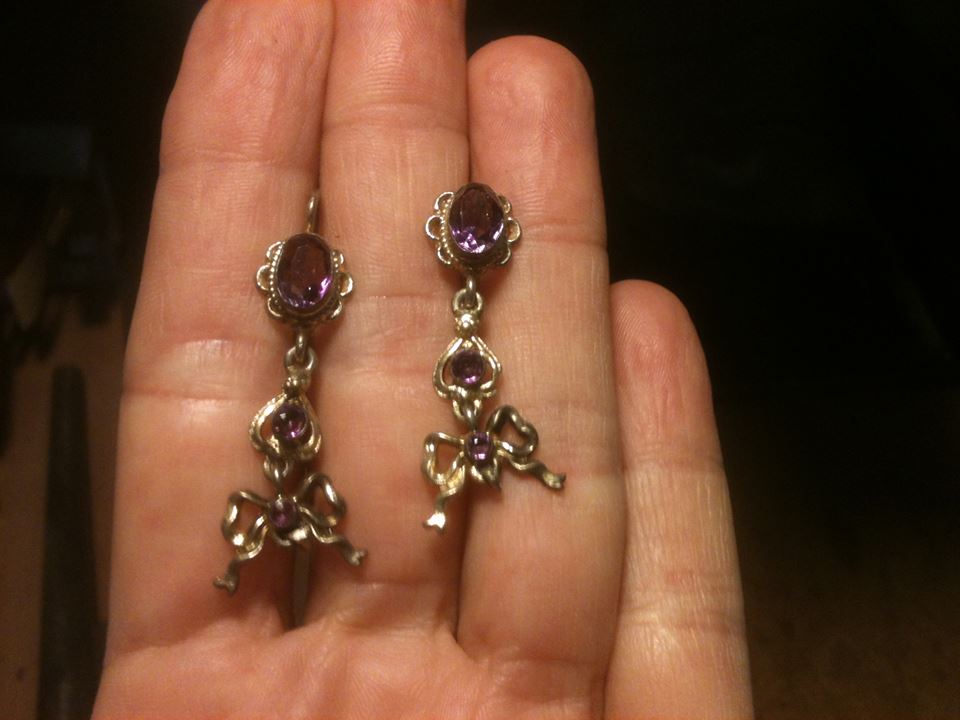 Thanks in advance! I’ve attached a photo of the earrings in question.

With regard to “killing antique value by doing a repair”, that’s a
very touchy/interesting question. I am a quilter as well as a
silversmith. I volunteer at a quilt museum and visit other quilt
museums when I can. At “my” museum we do repair some old quilts and
we also finish old quilts that arrive as quilt tops. We maintain
integrity by sewing by hand any quilts that were “handmade” and make
repairs with vintage fabrics. These repairs and re-creations are
noted in the about the quilts. However there is another
quilt museum within visiting distance and the policy there is to
cover problems with an almost invisible netting, lightly basted and
make absolutely no changes in the quilt because any sewing or repair
to an old quilt makes it’s date fhe moment of sewing. The old 1860
civil war quilt that you just repaired is now dated 2014.

I have thought a lot about this and I think that a repair which
returns something to its original shape or intended use is okay as
long it is published. I do not think it is proper to add to
something and then call it an antique. It’s a matter of integrity of
honor and honesty.

You should fix them and refinish like the original one. Gently clean
the original, no polish You are correct-little to no value broken.
The lower dangle could have been an amethyst or possibly pearl-like
you stated. When I need to research, I go to EBay and search under
vintage. But, I also own several books on antique jewelry, including
Christie Romero’s “Warman’s Jewelry”, an excellent resource. I have
both the 2nd and 3rd editions.

there have been 2 interesting replies to you your question. When I
read it originally, My thoughts were somewhat different.

these were that if, as you describe they are silver gilt, then my
first thought was any soldering a replacement ear wire would most
likely destroy this gilding.

So what next? I thought?

looking at them, if they were mine, id very carefully cut through
with the thinnest saw blade the jump rings holding the large settings
and re hang them where you think a pearl might have been.

then replace the ear wires with a gold ones through the remaining
now top jump rings not soldered for the reason mentioned above. Then
cut off the remaining ear wire flush and clean up. This then is a
reassemble of the components with the form and proportion reasonably
balanced. ie small stone medium stone then large stone. It would be
interesting for you to let us know wether the metal parts were cast
or die stamped.

given the dates you mentioned it could have been either.

What to do then? if you offer them for sale then a honest
description would be in place.

I had an interesting one the other day, A customer showed me some
sterling silver enamelled buttons, set of 6. She bought them as art
neveau. I looked at them and something didnt ring true. I turned them
over and on the back was stamped sterling. Then i realised what it
was. The type face of the stamp was from 1930/40 I told her to take
them back and get a refund. I know where they bought them and was
fairly certain it was a deliberate miss sell.

The gilding is not in terrific condition as it has been worn off in
a few places, so I would be repairing that as well. As far as taking
them apart and reassembling them in a different order with different
ear wires, I’m not inclined to do that. The existing ear wires were
constructed with a very clever little springback, which both earrings
still have in functional order. What is missing is the plain wire
half on the top of one – the half without the springback on it. I’d
like to retain the original mechanics of the earrings rather than cut
them off. I’d also rather keep the original layout instead of
rearranging them. Personally, this would make them more appealing to
me if I were going to buy them. Ultimately they won’t be for sale,
but are going to be a first-baby gift to my pregnant daughter who
loves this type of jewelry, so disclosure for sale purposes isn’t an
issue.

As far as how they were manufactured, they were cast pieces which is
evident when looking at them with a loupe.