A customer recently brought in a Turkish Harem Ring for Repair

I have posted a photo of it at… 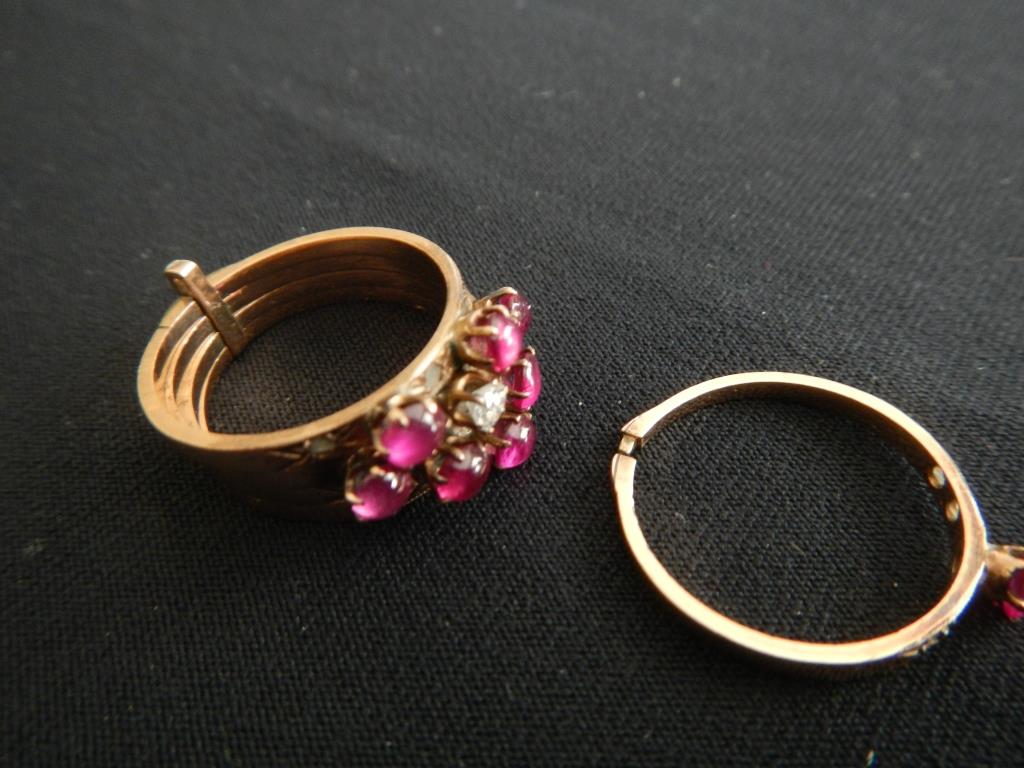 The ring consists of 5 rings which are held together at the bottom
by a rectangular “box” or holding piece.

One of the rings broke off where it was held in place by the
rectangular box. The ring itself is easily soldered back together,
but my problem is that I am not sure how to get the ring back into
the rectangular box.

Some possible options are:

Solder the ring together, cut the box and place the ring back in the
box.

Other choice is to distort the box. Put the ring back in the box.
Solder the ring shut and then try to reform the box. Problem with
this option is that I don’t think I can reform the box back into a
nice rectangle.

I think that the first option is the way to go, but I need a method
to assure that I do not solder the rings to the box or to each other
when I am soldering the box back together

Thanks in advance
Regards
Milt

If I were you, I’d remove the box. Align the five rings together,
and create a brand new box. this way nothing like this would happen
again.

By the looks of this, it will occur again & this makes one unhappy
customer. they will for sure blame you & it’ll be bad advertising!
Tell her what you did, & charge them for making it tunz better. it’s
called “Preventive Repairs for future wear”…agree? Gerry Lewy

I was taught to put liquid White Out (from the office supply store)
anywhere I don’t want solder to flow in tight area operations like
this. Make sure the only area not painted in White Out is the area
you want to solder. Then clean well in the ultrasonic afterward.
Works great for hinges with soldered end caps too.

Donna is correct they have other stuff for that as well. Being that
it is the outside band cut the end of the box with a thin saw blade
and rejoin it with as small a piece of solder you can. Or a laser
welder. No solder then. Or tell him you don’t need that many wives
nor does it even sound pleasant and leave that ring off.

That’s clever, and probably stinky. How about mixing some rouge and
some methylated spirits to make a paint, and use that? CIA

things may have changed but one white out was water based the other
contained phosgene a bad poison.

Apparently things have changed. I can find no that
indicates such a danger from either water-based or naptha-based
whiteout (or wite out, the actual 3M trade name.)

The MSDS indicates no hazards other than naptha being flammable. No
ingredients contain chlorine, so it would be impossible to produce
phosgene.

There is a brand of herbicide named whiteout 2-4-D, which does
produce various chlorine compounds when burned. I wonder if that’s
where this warning came from.

the phosgene warning was based on what I was told 30 plus years ago.
Glad to see this has changed. Because it works. Guess who’s mom
"invented" this stuff “Hey Hey we’re the Monkeys” Show your age here
kids.

All the best
Richard

Most popular suggestion was to use white out to keep the solder from
getting on the rest of the ring and causing all of the rings to be
soldered together.

Best suggestion was to use a laser welder, but unfortunately I don’t
have access to one

Here is the link to the photo I sent

Thanks in advance for your help
Regards
Milt