I’ve been asked to repair a sterling barrette that has a coral cabochon. The barrette clasp is attached to the plate via two small posts at the back. This will be my first repair job.

I’m trying to decide whether to remove the stone or go ahead with it in place. I’d rather not remove it. I’ve read that coral is exceptionally sensitive to heat, but these prongs are a good distance from the bezel. Is surrounding the cabochon in wet paper towel sufficient? I’m working with a Smith little torch on oxy-acetylene.

Thanks for any help! 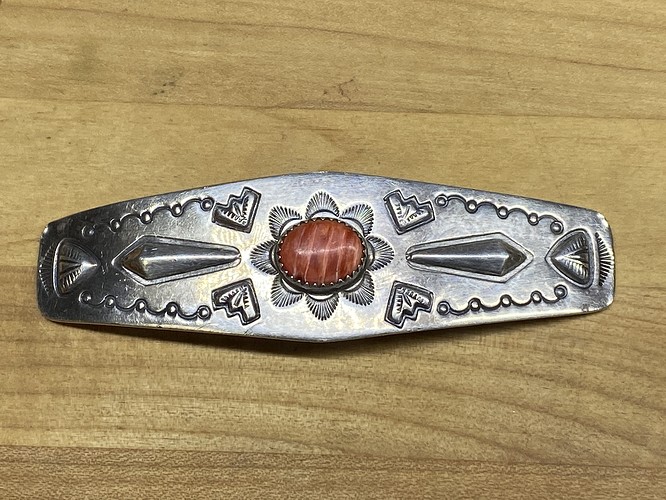 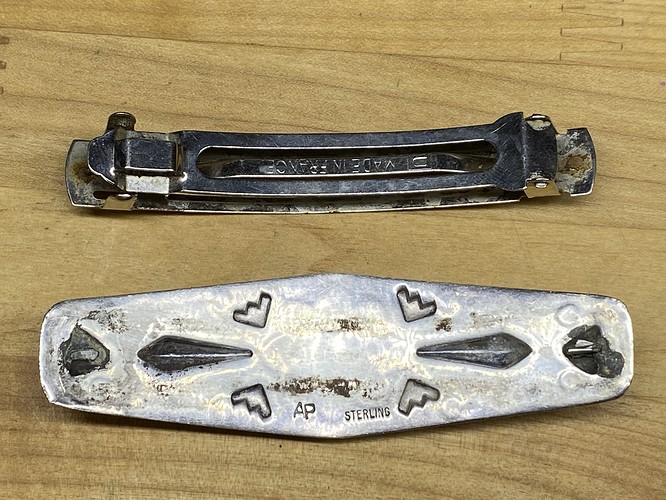 Be safe and remove the stone. Silver transmits heat very well. You have to have enough heat to do the job and the wet paper towel will not let the silver get hot enough for the solder to flow. Often there is organic material under the stone that could burn also. Be very careful in removing the stone, but once the stone is removed, you have more leeway to do the soldering and the clean up. Coral is very sensitive to chemicals and polishing.

I would definitely recommend that you remove the stone. The bezel is actually an easy one to work with. If the stone is glued, then put it in the freezer and it should pop off.

Check to make sure that the clip wasn’t soldered on with lead solder. More often than not steel findings such as this one will be attached with lead solder. If it is soft solder (lead solder) you’ve no problem with heat, just use a soldering iron rather than a torch.

As others have suggested, remove the stone. I have made barrettes using the same finding. There are holes in each end. You might consider soldering solid wire to the back of the barrette that you can use to rivet through the holes in the finding. I would buy a new finding. They are inexpensive and you may actually find them at a Michaels or similar craft type store. If I can find one, I have pictures of this type of piece and I will post it…Rob 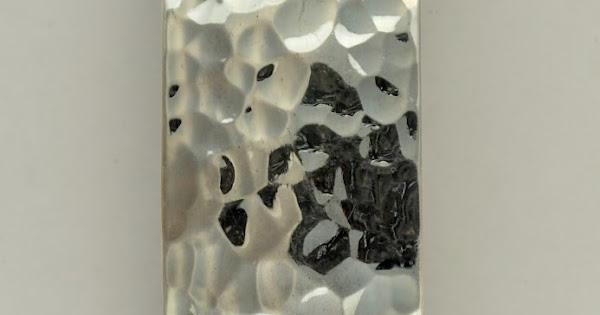 I’ve made many with same clip. I file off the teeth hold One side on with tweezers and solder. Do the same on other side.
Never had one fail.
Good luck.
Kent 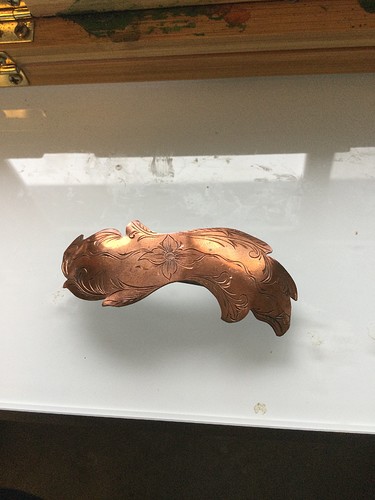 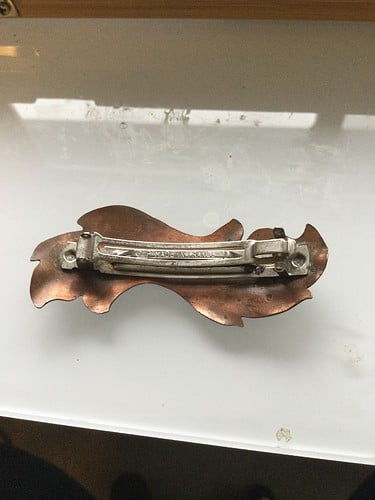 When accepting stone-set items for repair, it’s always a good idea to clearly state on the intake job-bag, in front of the customer at the time of take-in, that “Stone is stated by customer to be xxxx but it has not been tested by a qualified geologist and no liability is assumed.” Unless you protect yourself, at any point after the piece has been repaired and returned to the customer and then identified as being something else, it may cause problems for you. I’ve handled thousands of pieces of coral but never seen one that looks like this.

I cut two strips of fine silver and solder them to the piece and then fold the ends over to hold the clip in place. When the clips are used everyday for five to eight years the spring catch will finally break, even on the high quality French made ones. My girls won’t use any other kind as the cheap ones cut hair. The barrette can then be sent back to me to install a new clip or I can just send them a new clip and they can install it. Some women are really tough on their clips but those French clips can take a lot of abuse.![image|690x380](upload://mltx06k4q2a2JStzoZ989P2lxVV.jpeg)

I’ve learned the hard way not to do visual I.D.s
If I can’t get at least a refractive index, I bite my tongue. “Better to be silent and thought a fool than speak and prove it.”

I have long had a policy of not repairing anything that requires removing stones. It is a skill that, while I have, I won’t use. Especially what I would define as craft jewelry. I have no way of knowing(for certain) what the last bit of solder used on the piece might be. And I would almost certainly loosen or melt something else in the process. But that doesn’t help with the question.

I remember seeing our Father using pure tin in some repair work on particularly old stone set work of his own. He had the stone removed and was replacing a latch on the back of a Bolo Slide. I was there to polish so I don’t recall what the out come was. He said it had a low melt temp and he was less likely to loosen other solder joints. I haven’t tried the pure tin for solder technique so I really don’t know if it would work.

When I make barrettes I occasionally use the mechanical method my brother describes. Depending on the finding. I am usually using the “Put the spring wire through the tube and catch it under a hook” method.

I would take out the stone and proceed with caution.

Please do not use soldering iron to repair. Torch and silver solder please on that sterling.

What Elliot Nesterman said. Lead solder is often used to solder on this style of hair clip. The heat from silver solder would anneal the clip thus destroying the spring it needs to hold the hair in place. Take a sharp graver to the areas where it was connected to check to se if it’s lead solder. If so just proceed with soft solder and a soldering iron. If that is the case I recommend Tix solder and flux.