I was given a sterling knife to repair. The issue is the “cement” that was used to connect the knife blade, tang and handle. Short of digging out the cement to solder this back together, what is the best way to move forward on this project.

Here in the UK the filling inside these knives is called cutlers cement. I used to have to make it for our silversmiths when I was an apprentice, I used to melt Stockholm pitch in a ladle then I would add plaster of Paris to the pitch until it became a cream. then I would pour it onto a stick mold made up of a line of old files sitting on a steel flatplate, when cooled this gave the silversmith 12 inch lengths of cutler’s cement, the silversmith would sit a group of restored knife handles in a box of wet sand and partially fill each handle before fitting in the knife blades. To remove old cement from handles he would first try heating with a torch to melt out as much filling as possible, then he would leave the handles in a paint stripper overnight. Here in the UK we used Polyclens paint stripper, which dissolves pitch based products. I hope this all makes sense, if not just Google Cutlers cement.

What probably happened is that someone put that knife in a dishwasher, which gets hot enough to melt the cutler’s cement inside the hollow knife handle. The easiest fix is just to heat it enough to re-seat the blade, and then let it cool. If that doesn’t work, some of the cement must have escaped, in which case you’ll have to heat the blade until it can be removed, pack in some more cement, and replace it, using enough heat to melt the pitch - but not nearly hot enough to melt the solder.

You might use a material called dop wax. It is a similar cement that you heat up. It is used to attach rough gem stones to a dop or stick for cutting.

Golf Smith has epoxy for golf clubs. Other make it yourself golf stores will as well. The epoxy is one that will handle higher temps. It would still melt at the highest setting on a heat gun, but a dishwasher would have no effect. If you want something other than wax or the pitch, try the epoxy.

It might be useful to contact the manufacturer to learn what’s inside the grip. I would be concerned about the feel, or “hand”, after a repair: how the knife weighs/behaves with some other substance within, compared to the others in the set. I’d also be concerned about using something that could interact with and damage the silver.

The makers mark is difficult to read, and probably long gone with all the other silver hollow ware manufacturers from Rhode Island. I’ll try though.

I’ve been using dental plaster in most handles for years. It doesn’t shrink and cures harder than pitch. After filling the handles, I place them in an 220-degree oven for two hours to remove any remaining moisture. Unlike the Sauereisen (http://www.sauereisen.com/) the silver companies use, dental plaster can be drilled should the blade need replacing. Dental plaster makes the handles virtually dent resistant. I created this jig for setting up the blades until the plaster has cured prior to placing them in the oven. 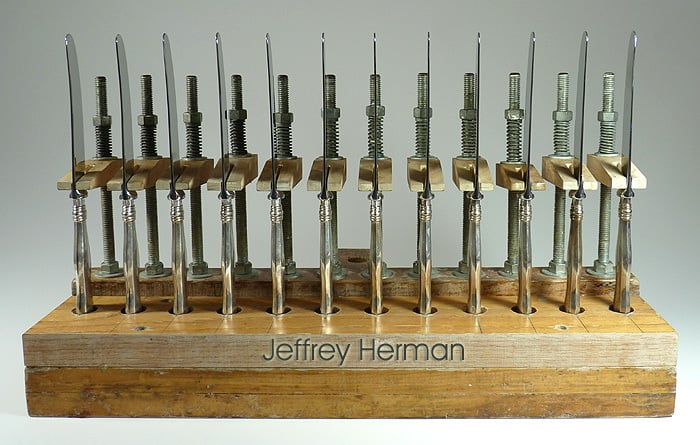 Hello Jeffrey,
Always glad to learn from you. Some years ago a colleague asked me to repair the repousse handle of an antique button hook. Someone had really abused it and the thin silver was dented and torn. Beyond my abilities! If I’d known about you then, I could have directed him to you.

Judy in Kansas, who decided that discretion was the better part of valor on that one.