Titanium’s oxide layer can be removed by dipping the metal (for
approximately one minute) in a bath of “NO-SAN”, a dental chemical
used to remove investment from dental castings. NO-SAN maybe
purchased from “ACCURATE”, Dental Manufacturer, in New Jersey, 800
462 2789.

Mary Ann Scherr is a designer, educator and goldsmith

It works great but it is a hydroflouric acid based liquid. Very
dangerous. Also I have heard it is no longer being made FWIW.

Many moons ago, I had a gallon of it (and may still, somewhere…). I
asked MaryAnn Scherr for a copy of the lab report she’d had done up
on it, to figure out what it was. As I recall, it was mainly sulfuric
acid, with a little thiourea. No HF at all.

This was important, as I was desperately trying to get AWAY from
using HF etches at the time. (This was in gradschool, roughly 1993 or
so.) I’m in the middle of moving, so most of my research notes from
back then are packed away, but I think I may even still have the lab
report in with my notes. If it becomes a big deal, I think (?hope?) I
know where all that stuff is.

I’d also heard that it was no longer available, as of a few years
ago. But with the advent of Bill’s Multi-Etch, I haven’t bothered
worrying about it. Multi-etch works much better than No-San did.

I’m hoping I can assist you in removing titanium oxides. I have an
article, “Adding Color to Titanium with a Torch”

In it describes removing the oxide with titanium rubber wheels. Not
in the article is another method I just discovered and that is
removing it with a rotary wire brush. Really any abrasive will do it
as well - I guess your biggest decision is what kind of finish you
want on the metal when your done. As would follow to reason, the
abrasiveness of the tool determines the finish. If you want a mirror
finish, use the rubber wheels. If you want a soft luster use the
wire rotary tool or sandpaper.

NO-SAn Contains Hydrochloric Acid and other trace minerals. It DOES
NOT contain Hydroflouric Acid, This subject was investigated before
offering it to anyone.

Is it still available?

Well every one I have ever talked to about No-Sans has told me it
contains HF. But you made me curious and I did a little digging. I
cannot find anything on the web about No --Sans but I did find this
article about titanium’s acid resistance. 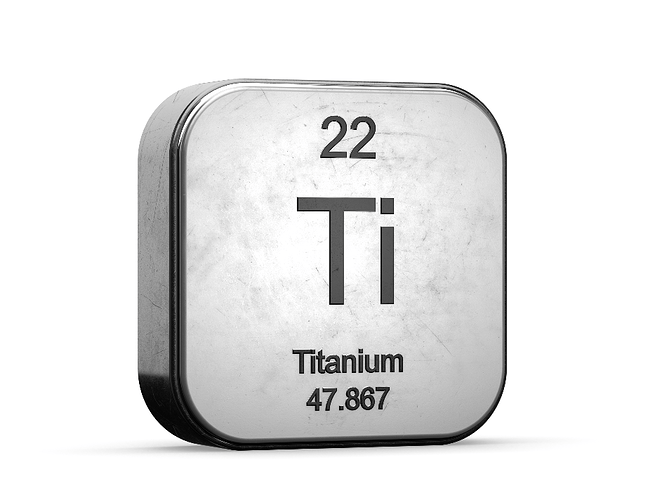 The titanium metal was first commercialized in the year 1950. Since then, corrosion resistance has turned out to be a critical consideration while choosing it as an engineering structural material.

It looks like it is not as acid resistant as I had thought, bot
Hydrochloric and Sulfuric will attack it in high enough
concentrations. However it looks like small amounts of other metals
like iron, copper or nickel in the acid can inhibit the corrosion of
the titanium except in HF. So it could be you need high
concentration of reagent grade sulfuric acid and the thiourea may act
to accelerate the corrosion. The article I referenced mentioned that
hydrochloric or sulfuric acid mixed with amines are highly corrosive
to Ti and thiourea is not an amine but looks to be close in structure
to them so it might have a similar effect.