OK, all of a sudden I am seeing this “stone”(?) on eBay and the
like. The pictures are very pretty. Anybody know anything about it?

No, I personally don’t know anything about it but I did find this:

“The premier U.S. gem-quality feldspar is the red labradorite, known
as sunstone, mined in Oregon.”

And I agree, it does look pretty good doesn’t it? C

heers,
Trevor F.
in the City of Light

I think the “red labradorite” you see is bytownite, a subvariety of
feldspar within the plagioclase group, of which labradorite is
another member. It is right next to labradorite in the series,
having a lower content of albite and higher content of anorthite.
They probably figure it will well better if they give it the name of
a more recognisable mineral . Just like the “red emerald” misnomer.

Not sure if there was a pic. at some point that showed what stone
you’re asking about, but I googled red labradorite on ebay and would
venture that it’s probably an Oregon sunstone. Sunstones rock! I’m
glad to see they’re finally gaining the attention they deserve.

Hope that helps some, Carol

Labradorite is plagioclase feldspar that displays the phenomenon
known as labradorescence.

Red “labradorite” is a transparent to semi-transparent, reddish
plagioclase feldspar.

“Rainbow” moonstone is a transparent to semi-transparent colorless
plagioclase feldspar.

The pictures are pretty because the stone IS pretty. But it isn’t
labradorite. You’ll sell more red labradorite than red plagioclase
feldspar, though.

Is there a symbol for me thumping the side of my head in confusion?

I thought labradorite was from (wait for it…) Labradore.
Otherwise, it is spectrolite. No?

Anyway, the piece I found on eBay is clear, bright red, no schiller,
which I thought was a necessary quality for sunstone. I still have a
lot to learn about stones.

The reverse – sort of. You’re correct in that labradorite (a type
of feldspar) is named for Labrador, but Labrador is not the only area
where this mineral is found. The very fine labradorite that comes
from Finland is called spectrolite. In other words, spectrolite is
the more specific name and labradorite the more general one.

While schiller does characterize much Oregon and Indian sunstone,
the Oregon variety does exist as a clear bright red (and also green),
without schiller. You can find clear, nearly white sunstone as well,
which is diamond-like when faceted. And, as others have pointed out,
while sunstone is a type of feldspar, it is not a type of
labradorite.

This link shows a piece of carved Oregon sunstone with red, white
and green banding: I saw the post on red labradorite. I posted a list of links that are
a good starting point for (Saturday post.) Unless
carrying all the bookmarks you may wish to add them, it gives you a
resource to thus saving some trouble. It had some
on sunstone and one site giving recommended angels for
cutting (they are different than most colored stone). Sunstone is a
labradorite variety.

Anyway I did look on Ebay; I can not state that is Oregon sunstone.
I found this on the Colorado Gem & Mineral web site. New discovery of
"padparasha like feldspar" also called sunstone. The deposit is in
the Congo, Africa. I think those on that Ebay site may be (in part)
those stones. Apparently this is not a misnomer in this case. As they
decided to call it red labradorite instead of sunstone, as it is not
from Oregon. (The country of origin, having the right to name its
minerals, as Finland did with their labradorite, i.e. spectrolite.)
Why they did not opt for sunstone as the name, I would not know, same
stone, as would be the case with an amethyst, regardless of origin.
This may be a source of confusion for some time to come.

I am of the opinion that labradorite comes from many places in the
world… Much from Canada? The highest quality labradorite is named
by us lapidary people as spectrolite and it ONLY comes from Finland,
that I am aware of… Others will have more info or you can do a
google search for spectrolite Finland etc and labradorite and learn
the technical and geographic differences…

Sunstones do rock they are a great gem… But there seems to be some
confusion the red labradorite is a new gem find from the Congo that
was introduced in Tucson this year. They are also called Andesine
they come in a lovely reddish-orange color and they also occur in an
interesting greenish-blue color and even come mixed occasionally…
It is a very interesting new gem I bought several stones myself . I
did notice no price or quality consistancy in the availible gems in
Tucson everywere for $35 pc to $600 pc and i only found about six
dealers who even had the material or knew about it…I was very
obvious which dealer was the last to arrive at the mine after the
material broke.

AFAIK, spectrolite is a term for black-base labradorite. Much comes
from Finland, but I believe it also comes from the former Soviet
Union.

That’s a gorgeous piece, Beth! It isn’t for sale, is it?

Thanks for the info about Labradorite, etc. Sadly, the piece on eBay
got too expensive for me-- it looked quite pretty. But at least it
is good to know it is probably a real stone.

I really don’t know, but possibly. Here’s the site that the image
came from: http://www.free-form.ch/minereports/dustdevil.html.
There’s an inquiries link at the bottom.

Someone said the highest quality of labadorite is called
spectrolite. In Ontario, just off Highway17, before you get to
Thunder Bay, even before the “pick your own” amethyst mines, is a
hill called “Spectrolite Mountain”. There, for I belive $2.00 a lb,
you can pick off the ground or off the hill as much iorn stained
spectrolite as you wish.

One of my retirement activities is lapidary and I mostly work with
the phenomenal stones opal and spectrolite. Also, both are simply
lovely to look at as well as pleasing to work with. My fascination
with spectrolite led to quite a bit of reading and research and this
resulted in my article titled “Labradorite Or Spectrolite?” which
appeared in the August 2003 issue of Rock & Gem magazine. If you
can locate a copy, this might help to clarify the
labradorite/spectrolite question. I might add that the name
"spectrolite" originated with Professor Aarne Laitakari, Director of
the Geological Survey of Finland, and applies to this form of
feldspar that is mined exclusively in southeastern Finland. While
taking nothing away from the beauty of labradorite which occurs in
Newfoundland, Madagascar and many other locales, spectrolite
generally seems to have a darker matrix, more brilliant and varied
color and as you might guess, is comparatively expensive when
compared to the far more common labradorite rough material. Neither
labradorite or spectrolite should be confused with sunstone,
moonstone and other phenomenal stones, as it sometimes is.

A spectrolite mine owner of my acquaintance has made counter tops and
a sink for his wife’s kitchen using material from his mine. He told
me that even though somewhat soft, it doesn’t scratch or break. This
might almost make cooking and doing dishes a pleasure. Almost.

I participated in the “artists dig” at the Dust Devil Mine a couple
of years ago. It is only about a 3 hour drive from where I live in
Klamath Falls, OR.

It was a neat experience - and hot and very dusty. The most
exciting part was when a 10 year old found the most beautiful stone
of all, red with green around the center. I still have some rough
that I must polish - only wish I had the skill to do something
beautiful like the stone pictured. I also learned that I will never
make a good rock hound!

Maybe the following will help those interested in actually knowing
what red “labradorite” is.

Feldspar is an interesting mineral group. Pick up a rock anywhere in
the world and it will probably contain at least one mineral from
this group. While all feldspars contain aluminum, oxygen and
silicone, others like potassium, calcium and sodium may also be
present. Two species of feldspar contain potassium: orthoclase,
which includes the varieties moonstone and sunstone and; microcline,
which is often called amazonite. Plagioclase feldspars contain
calcium and sodium, and include the species labradorite and
oligoclase.

Moonstone is composed of two intermingled species: orthoclase and
albite. Together they form a new mineral of stacked, alternating
layers. The layers scatter light into the phenomenon called
adularescence, which gives this lovely stone its’ glowing look.

Labradorite is plagioclase feldspar with an albite intergrowth. Like
moonstone orthoclase, this intergrowth scatters light, but because
of it’s slightly different constituents, causes the phenomenon known
as labradorescence. It is mainly found in Labrador, but another type
that is mainly found in Madagascar has a multicolored adularescence
(a property of moonstone) with a very light bodycolor…it is
usually called rainbow moonstone. Another variety, mainly found in
Finland, is often called spectrolite.

Sunstone shows a phenomenon called aventurescence, caused by
sparkly, flat metallic inclusions. Here’s where some confusion
arises. Both orthoclase and plagioclase bear a sunstone variety, and
within them there are many varieties called sunstone. If
aventurescence is present (and it isn’t always), it is called
aventurine feldspar. Oregon sunstone is transparent with copper
inclusions and is found colorless, pink, red, yellow, orange and
green. Many times, the copper inclusions are too small to be seen
with the naked eye, or occasionally not present at all. When this is
the case with the red variety, it is faceted and sold as red
"labradorite." It used to be marketed as “spinel” red, but red
"labradorite" sounds much better and has definitely caught on. It’s
still a misnomer, though.

Noel, I have recently been enthralled with Oregon Sunstone. It just
so happens that a neighbor turned me on to a gentleman in town (I
live in Oregon), that mines sunstone. I’ve purchased several
beautiful stones, I prefer the red without schiller, however the
green can be beautiful, as can the reds that gradiate to clear. The
schiller can be pleasing, but just doesn’t move me as do the reds,
and oranges. In fact I’m sitting on a beauty that I was going to
incorporate in an enamel piece of mine, but all I really want to do
is make myself a ring with it.

Mmmm, I think this may be a
must…

Well maybe it has caught on elsewhere, but tomorrow when I go to the
local rock and gem show up in Sweethome Oregon, there will be a
large display of Red Oregon Sunstone. That is, after all, what it
is. I’ll keep an eye out for any red labradorite. In a state awash
in geological beauty and diversity, this phenominal gem is in a
class by itself. With schiller effects or not. A rose is a rose…

I provided the for Noel, who wanted to know what the red
"labradorite" that she’d seen actually is. For those who still have
difficulty understanding or just don’t believe, perhaps a link to a
page on Ganoksin’s site will help clarify.

In Issue #123 of Tips From the Jeweler’s Bench, a full, online
reading of a book by Sondra Francis, G.G. titled Gem Dealers’s
Secrets - Handbook for the Gem Buyer has been graciously provided.
In Chapter 9, under Feldspars, she makes reference to Labradorite
gems, and refers to the Oregon variety as Heliolite. 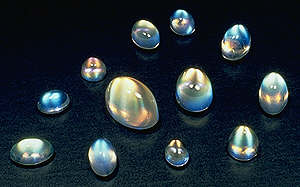 The feldspars are a group of related minerals which are the most abundant minerals in the earth's crust. Read on for more moonstones and labradorite.

If this doesn’t help clear up the mystery for anyone, I’m out of
ideas. And misnomers. Just try to keep in mind that there are many
misnomers for When you come across a gemstone you don’t
recognize, it’s often labeled with one.