Recommendations for a stonesetter microscope?

I am looking for the most affordable microscope for stonesetting,
but I do not want to wast my money by not spending enough. I have
never used a stone setting microscope, but it seems that the #10
optivisors are no longersufficient to properly see the tiny stones I
like to set.

So, any advice would be appreciated. Meiji, Ottosetters, anything
else? Acrobat arm - will anything less do? LCD or Fluorescent light?

Note From Ganoksin Staff:
Looking for a microscope for your jewelry projects? We recommend:

A binocular microscope with either variable magnification or
interchangeable lenses are best. Bausch and Lomb used tyo make a good
value one with a sturdy base but a cheap one will probably be
imported from China. I have used a Chinese made one from a company
called Motic(?) that was cheap but OK but look out for a decent
secondhand one with a good depth of field. The oculars need to be x5
or x10 and the objective from 2x to 10x or variable.

I have Meiji scopes, one of them a find on E-bay. You will want the
.5 diopter objective lens, it increases the focal distance from about
3" to 6" allowing space for hands and tools. The Acrobat stand is
solid and easily adjustable, designed to be used with a die ball. I am
a fan of GRS tools. You can buy their products directly or through
your favorite jewelry tool supplier. I have a fluorescent ring
light, and it really doesn’t provide as much light as I would like.
You may want to buy a high quality LED ring light, or use some small
halogen lights, though they generate a lot of heat.

The scope is one of those tools that lasts forever, so in my book
that’s the reason to try to find a way to get the best you can find.
I have the Meiji and the Acrobat stand with the florescent ring
light (that is just the light I have, the LED light will probably
last longer). I also use a 3 tube fluorescent bench light and a Wolf
LED spot light, one on each side, so I get as much light as possible
on the work.

The reason is this. The scope is really somewhat hard to get used to
using at first, your are sort of sitting up looking straight ahead
rather than leaning over a bit and your hands are down lower and
further away than you are accustomed to when working with your
Optivisor, that is sort of hard to get used to. You will find that
the most frustrating part of using a scope is keeping the work in
focus as you move it. As you know you are always rotating and moving
your work to get a better look or to just get at it. Every time you
move your work you are either moving it out of focus or out of the
field of view. With the Benchmate, when you move your work you will
move it out of the field of view almost every time so you have to
move the scope over to see the work, with the engraving ball on the
tray you can just slide the work over into the field of view as you
rotate it. You still may have to move the scope up or down but not
side to side. It makes it much easier to use.

Then when you need your bench pin you can easily put your shelf with
the small engraving ball on the floor next to your bench and pop on
your bench pin. It an easy and efficient system. You will also want
a drop down plate for your bench pin so you can use it under your
scope without having to sit up on a high stool.

If you give it a chance, once you get used to the scope I think you
will just plain love it.

In my mind regardless of the scope that you choose the Acrobat Stand
by GRS is an excellent choice in its ability to work with nearly any
workbench or space. It is easily adjustable to your height and how
you sit at your bench, yet just as easily can lift and swing from
side to side when you need it out of the way. I am a big fan! The
scope being attached to the ball joint is one of the best aspects of
the Acrobat’s design in that you can fine tune the scope’s placement
as you are sitting making potential hours at the bench more
comfortable.

Many people swear by the Meiji compared to the Chinese version, but
in checking them out side by side they are similar. The Meiji’s
optics are a bit brighter and tends to stay in focus slightly better
when you zoom out.

To second what Jim said, whatever scope you end up with, get the GRS
acrobat stand.

It’s much more adjustable than anything else out there, and the
best part about it is the headrest.

It lets you brace your head, so that you stay stable relative to the
eyepieces, without resting your face on the eyepieces. Also lets
you swing the scope a bit side-to-side, to follow your work if you
have to. Helps reduce the problem with the work vanishing out the
side of the view as you move something. At the end of a day, you’ll
be amazed how much less tweaked your back will be by using the
headrest on the acrobat.

Whichever scope you get, go for a zoom. Swapping lenses to change
power is a real pain, and they’ll get covered in crap on your
average jeweler’s bench. All sorts of dusty stuff flying around.

I have two stereo scopes: An ‘ottoset’ which is actually a Meiji
clone, and a Nikon that I picked up at an estate sale. The Nikon’s a
much better scope, but it’s also $5,000 new. I’ve used Meijis, and
they are nicer than the ottoset. Are they $1K better? interesting
question. (the big issue is that the Meiji will hold focus as you
zoom. The clone won’t.) I find that as I work, I tend to pick a mag
level that lets me do what I want, and pretty much leave it alone,
until I get into inspection or something. So holding focus while
zooming isn’t that much of a big deal for me. I actually leave the
Ottoset on the acrobat, and use it for most of my engraving. I save
the Nikon for closeup inspection work. The standoff distance on the
Otto works out better, and there’s not enough quality difference
that I care between them until I get into looking at something at
40X. Then the Nikon wins hands down. For general engraving at 3-5X?
Not such a big deal.

I’ve got both LED and fluorescent ringlights. The LED is variable,
which is nice, and it’s a better color balance, but either works
well. The LED is brighter. I’ve also got a twin-head fiber optic
illuminator (same estate sale). Interesting, and it gives BRIGHT
light, but really harsh shadows and dazzling reflections. It eats up
a lot of bench space. I save that for other uses.

I have been using my Meigi for the last 20+ years love it. I use led
lights Igot from a auto parts store 3 of them connected to a small
12v transformer. made a mounting bracket for them. works great

on this point does anyone use the school science microscopes that
connect to computers.

Price was $US650 total. You can get the same microscope on a
boom-style stand for around $360.

Things you need - stereo, zoom, a light ring of any kind, and a good
stand (vibration will render any scope useless). You do not need
90X.

And finally, a proper working distance. Very important. This is a
toughy; it’s the distance between the bottom lens and the focal
point.

Too little, and you can’t get your hands in there to work. Too much
and the eyepieces are too high. This scope has a typical 4" (100MM)
working distance, not quite ideal. Ideal to me would be 6". I will
probably purchase a Barlow lens ($50) to double the working
distance.

Finally, with this scope, when you zoom you will have to readjust
the focus.

Bottom line: This is a Ford. There are Cadillac’s for 3X the price.

Their optics are not 3X better, they are maybe 10% better.

I had the same concerns as you and I am happy with this purchase.
YMMV. 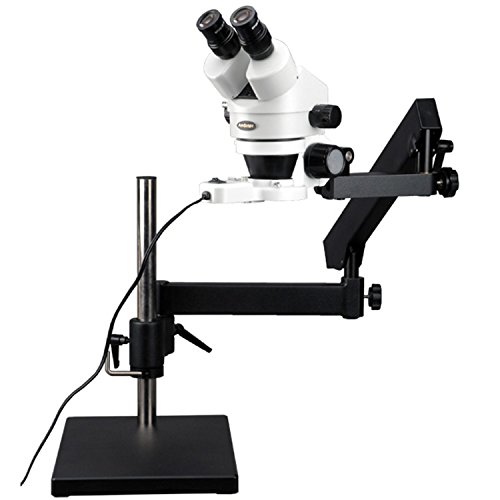 I have a Meiji EMZ-8TR (the video camera version) that I use not
only for bench work, but for selling repairs. I have two others
without the camera that my other guys use. The camera version has a
little darker image due to the image splitter feeding the camera, so
unless you are going to be doing demos or selling repair work with
it, save your money and get the standard EMZ scope.

I get all my scope stuff from GRS. Love them both (the scopes and
GRS). Acrobat arm, ring light (LED is better than fluorescent) and 2X
converter. Absolutely worth every penny in my humble opinion.

I have tried a PC connected close up camera, and the disconnect
between my hands and the camera were too much, and variable, for me.
Also, the depth of focus was too shallow. Also, my bench real estate
was too precious to lose almost a square foot for the notebook.

I now have a used Nikon SMZ-1 zoom microscope, with an articulating
stand and a 0.5X Barlow lens. I bought all on eBay for about $650 in
total. Without the Barlow, I have 5x-30x magnification and about 4"
working distance. With the Barlow, I work at 6.5-7.5", and 2.5x-15x
magnification. The depth of field is great at 2.5x, and fairly
shallow at 15x, but enough to set tiny stones. The view is
surprisingly wide. The stand allows me to swing the scope in and out
of my work area. I adapted my bench to have an additional bench pin
setup a bit lower so I could use the microscope without craning my
neck. It all works well, and the view is first class. Those used
Nikons are a great deal on eBay, and if you choose the used route,
make sure you get the originalNikon eyepieces, which are really nice
and a large part of the final optical quality.

Note From Ganoksin Staff:
Looking for a microscope for your jewelry projects? We recommend: