The Art of Hard Soldering By Henry G. Abbott, 1895 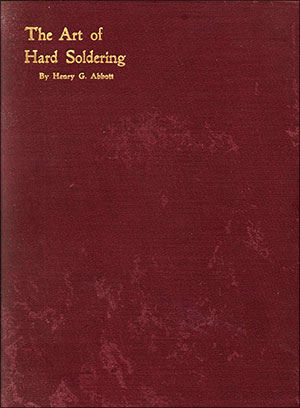 This 1895 book is very good. It describes the issues and techniques used in hard (and to some degree in soft) soldering. It is 74 pages of distilled, bright information. There are a number of mouth driven blowpipe torches described...

This 1895 book is very good. It describes the issues and techniques
used in hard (and to some degree in soft) soldering. It is 74 pages
of distilled, bright

There are a number of mouth driven blowpipe torches described using
various fuels. Alcohol and gasoline are recommended. Gasoline
torches of various kinds are described with very clear engraved
illustrations. (Gasoline torches are still standard in many tropical
countries mostly ones with open sides to their workshops lots of air
blowing through). The beginnings of gas torches are shown, and it
makes one realize how far we have come and at the same time lets you
understand the principles behind today’s torches. Odd arrangements
of tubes and heating systems for pre-heating the gasses are used to
get the temperature high enough to melt platinum.

Mouth blown systems were extensively used, and tips for using them
include rubber mouthpieces and gold plating any parts in contact
with the mouth. A coiled tip preheated the air being blown into a
flame and this doubled the heating power of a standard blow-pipe.

The foot bellows shown to supply oxygen to a flame is exactly the
same as I learned to use in the 80’s in Germany, and is the same as
that used today in most countries outside North America.

Flame types are well described and diagrammed. There is an emphasis
on using a reducing flame to remove oxides during soldering.

It is claimed that charcoal can embrittle gold alloys heated on it.
Asbestos was used a lot and recommended. That would be unthinkable
today.

The images of blowpipe soldering different problems let you know how
lucky we are to have the torches (and lasers) we do today. The
drawings (actually engravings) are very good, thorough and clear.

There are a number of clamping devices for holding pieces for
soldering that have been forgotten, and look useful and interesting.

There is a very clear discussion of fluxes, what to use, when
appropriate etc. The same with solders, making your own, alloys for
solders, constituents and more. The section on alloys has many
recipes. Carbon (graphite) ingot molds and crucibles are described
and pictured, with automatic systems for melting and tipping. There
is a scathing critique of general work quality in soldering and
repair. This author would have been in heaven to have had a laser or
a fusion welder.

The discussion of repair is excellent, and would benefit anyone
today. There is a very interesting section where the author takes
you through a number of technical procedures, step by step, with
comments. Subtle blowpipe skills are described. What, for people in
the West, is interesting, is that if you just go on numbers of
people using a technique then this ancient approach is still the
most popular in the world, the most used, in Asia, India and other
places I suspect there are still more users of this approach than of
high tech (and expensive) torches.

I think every jeweler should learn to use a blowpipe. For chain
repair a $2.00 blowpipe can equal a $500 mini-torch. While traveling
I once hard soldered a chain using a candle and a Bic pen tube. A
useful skill for the extreme jeweler.

There is an excellent section on testing gold alloys for gold
content. Using apples and potatoes to protect a gem during ring
sizing is described. (I like paper towel and water mush for this
myself). Repairs and joint types are covered.

An interesting book, well worth adding to your library.

Download the full eBook at the ridiculous price of $5.

This 1895 book is very good. It describes the issues and techniques used in hard (and to some degree in soft) soldering. It is 74 pages of distilled, bright information. There are a number of mouth driven blowpipe torches described...