Our new Foredom no 20 handpiece is losing its grip. Is this a common
problem with this handpiece? I see now that it’s advertised as being
great for precision work - does this mean it can’t handle much
torque?

Over the last few months the grip in the collet has losened to where
now it won’t even hold a 1mm drill bit tight enough to drill.
Swapping handpiece to a chuck-style the drill bit works perfectly.

Something curious: ‘standard’ 3/32 inch shank diameters range from
2.32mm (Metalmaster mandrels in the Jewellers Assortment Kit which
accompanied the flex shaft), through 2.34mm to 2.36mm (the short
length of shank they supply with the handpiece to keep in the collet
when unused).

I’ve approached Rio (the supplier) for their comment, but meanwhile
I wonder: does anyone here have experience with the no 20 handpiece
and whether it has a tendency to slip?

The Quick release lever opens and closes the collet. This has a Set
Screw that needs to be adjusted.

The Collets do wear out and need replacement and if it is New I
would show this to a Tech.

You may ask Foredom for instructions.

Last January Foredom had a couple of users tell us that they have
experienced a loosening of their collets so beginning in February
2006 Foredom started shipping the No.20 Handpiece with a 1.5mm allen
wrench. This allows the user to tighten or adjust the collet for
under or over sized 2.35mm skank accessories. The No.20 Handpiece
does have excellent concentricity and can handle all the torque
required for most jewelry operations, such as stone setting,
drilling, texturing and polishing. I have attached the collet
adjustment instructions for anyone that does nothave them.

Here in the Handpiece Repair Center this collet slipping issue comes
up often. Your Foredom 20 handpiece should grip standard 2.35mm bits
and the slightly bigger 3/32" (2.3812mm) bits adequately. The collet
can be cleaned and adjusted if needed. The Foredom 20, Original
Tecno-X, Swiss Made Technique, USA made Techno handpiece, Grobet Q40,
Grobet 34.260, and 180/00 are basically the same design and the
collet adjustment procedures are the same. The collet grip is limited
on these handpieces by spring pressure making them good for most
work, but not ideal for high torque use like polishing. We can post
adjustment instructions here on Orchid if there is enough interest.
If you need a quick-change handpiece that can grip really tight,
there are some good choices out there. For example, the Foredom 52
can be adjusted to grip extreemly tight. Hope this helps.

Thanks Mike, and Phillip Scott at Rio.

Ours didn’t come with the allen key but I used one of my own. It was
easily adjusted… I’m all better now

This was a huge help all these years later. Thank you!

This subject comes up regularly, so I made a tutorial mostly for my self, because every time I have to service one of my hand pieces, I forgot how it all went together.
Old age and all that. The hand pieces are all the same, one way or the other.
Mine are the T 30 Italian ones. 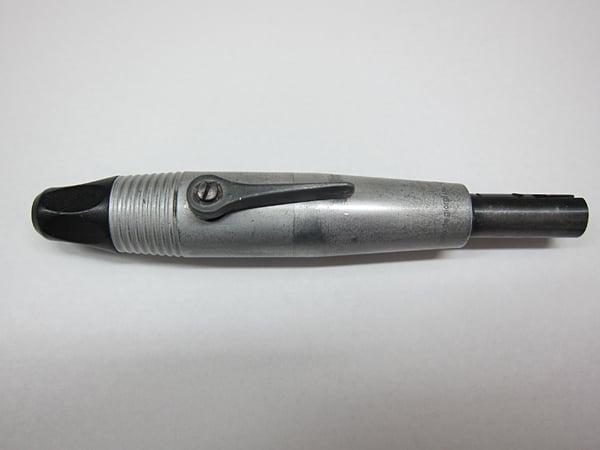 This is a standard hand piece that comes in a variety of flavors and manufacturers.
It is a very good hand piece and but it’s kind of difficult to take apart at first.

The biggest problem it that the jaw collet starts to wear a bit and this causes the burr that is being held to slip.

This is easily adjustable—sort of. 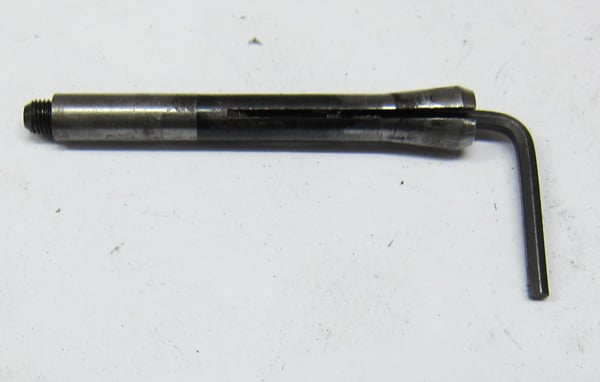 Inside the collet is a grub screw that accepts a 1.5mm Allen key, also known as a hex key.
This is problematic, because sometimes the grub screw had gunge in it and the hex key won’t go in easily.
Or, the older models have a screw driver slit.
One has to determine which is which first.
At first, I really battled to loosen the collet so in desperation I took most of the hand piece apart, and dumped the entire thing into my ultrasonic cleaner inside a zip lock bag filled with turpentine. 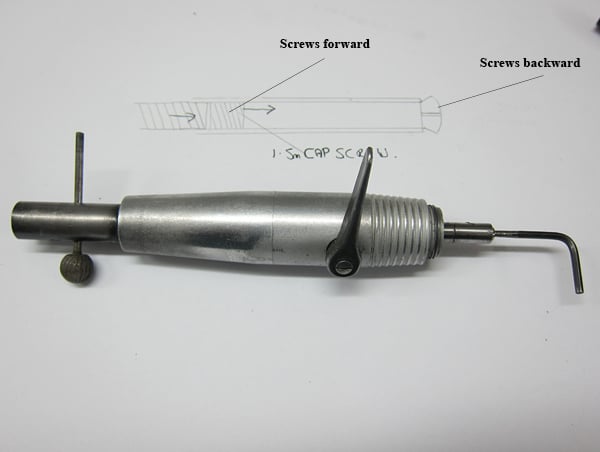 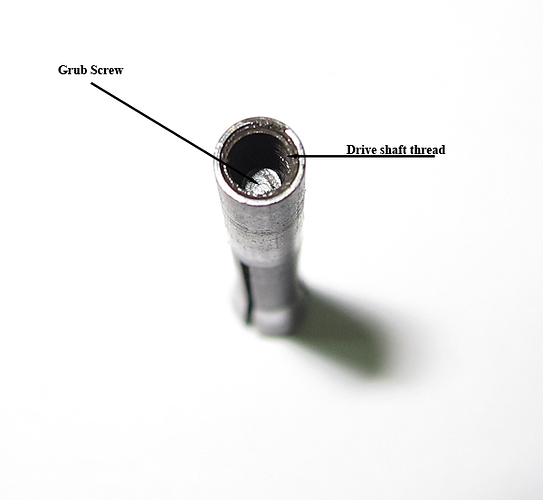 So: If one now turns the grub screw slightly outwards, it will allow the drive shaft to also screw deeper into the collet until it meets the grub screw again and locks the collet into position.
This effectively shortens the collet and allows the collet to be pulled in further, thus making the collet tighter.
It is quite possible to screw the grub screw to far out and then it will not accept the burr because the collet is now too small since it is pulled in to far.
Then it has to be screwed a bit back until a happy medium is found. 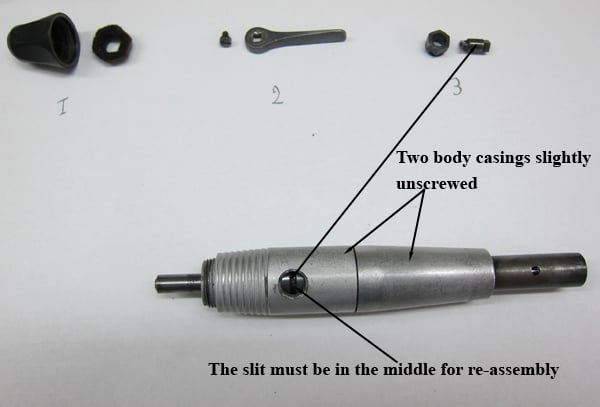 To further disassemble if one has to replace the bearings.
No 1: The top cover and oil felt are removed.
No 2: The lever is removed by unscrewing the holding screw.
No 3 : The opening cam is unscrewed using a 8mm spanner.
(When the piece is reassembled, the two body casings have to be slightly unscrewed until the cam slit is in the middle of the cam hole, as is shown. Once the cam is screwed in, the two body casings are properly tightened.)

This allows the top casing to be unscrewed, which has the front bearing press fitted in it.
Should it need replacing, it is simply tapped out with an appropriately sized brass or wooden dowel. 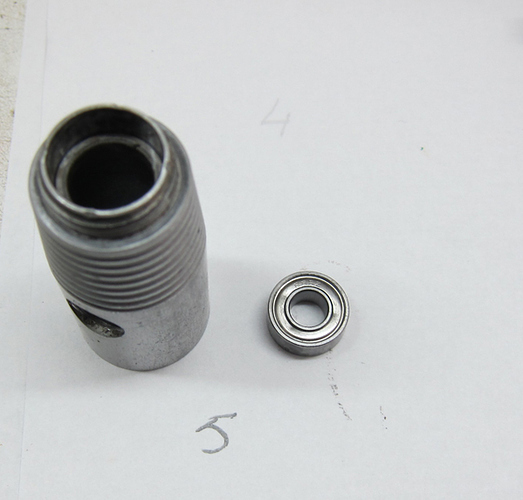 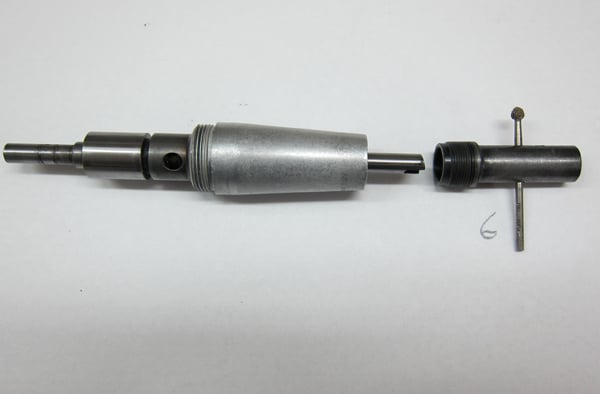 The rear bearing is removed by first removing the cable interface.

I use an old burr to give leverage to screw it out. 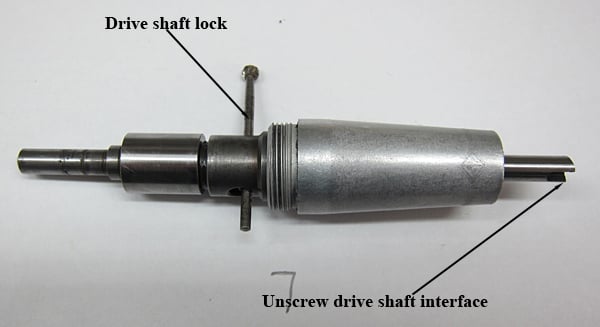 Once the cable interface is removed, the drive interface can be unscrewed. 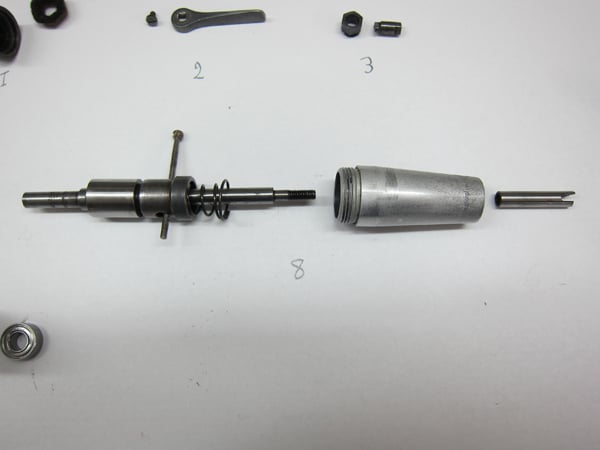 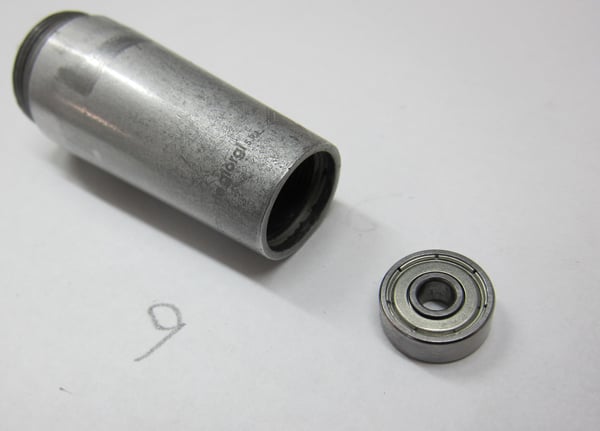 The rear bearing popped out.
I buy all my bearings from SMB bearings.
They have a great ‘can do’ attitude. 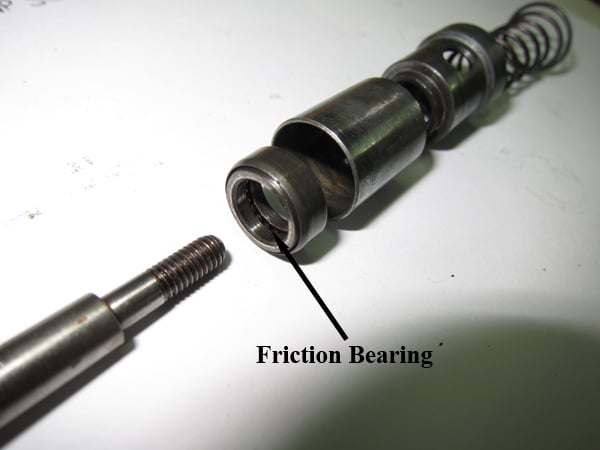 I have never found the need to have to replace this bearing.
Mostly it is the front bearing that dies first, but if I replace the front on I also replace the rear one at the same time. 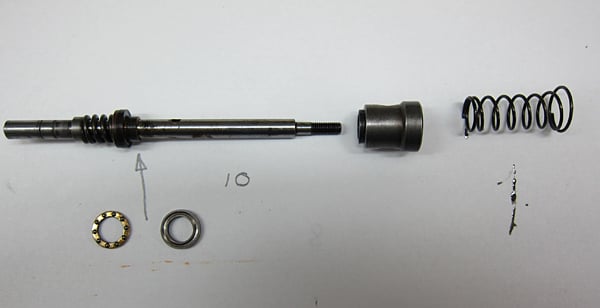 When the hand piece is re assembled, watch out that the spring on the right goes in as shown in the picture.

Just for interest.
There is no need to disassemble the drive shaft.
I only did so to see how the whole thing is put together.

Thanks for that Hans. Mine is getting near to having an adjustment and I do not know of any company in the UK who would repair it but now with your help can do it myself.
Regards
Robin

@meevis - your tutorials are amazing.

I’ve got that same hand piece. I just two weeks ago got a new collet. It’s
that end piece with the wrench. I couldn’t get the wrench in my old one and
it wouldn’t adjust any more. New collet cost $12 and it’s so nice. I
should have done this a year ago instead of fighting it. Only issue with
the new one is the set screw is so loose from being new it turns by itself
from use. I put a tiny bit of sticky wax down in by the screw and warmed
it with a lighter. Now it stays put.