I have made 7 consecutive attempts to alloy an ingot of 18k yellow. Using 24k shot 1 troy oz, 3.88 pure silver shot, 3.88 copper cut from a .999 pure copper round that I had purchased from silver.com precious metal seller. The shot gold was from apmex.com, the silver from rio grande. I also included in the melt 18k yellow shot (half oz) from rio grande. So about 54 grams total in a crucible rhat was glazed w borax.

Problems:
I cannot get the copper to mix into the melt, but rather seems to rise to the top when i have poured it into a hrated steel mould, and quench, pickle it. You can see the copper layer on the top. That layer is black before its pickled. On the first few attempts a green residue remained in the crucible. Mired in the borax, i presume. I have cleaned it oit by tilting and heating the borax so contaminates poired out.

I am gyrating the crucible. And the melt is fluid, pink orange, and the surface is showing movement at high temperatures which leads me to conclue it is mixed welll. I am keeping the rosebud little torch on the metal as I am pouring it into the mould. This is my first time trying this torch, the crucible, or melting and alloying. I am sprinkling a pinch of borax during the melt. I am using an oxy-acetylene set up. Any ideas what I might be doing to cause the copper to remain separated from the gold-silver? 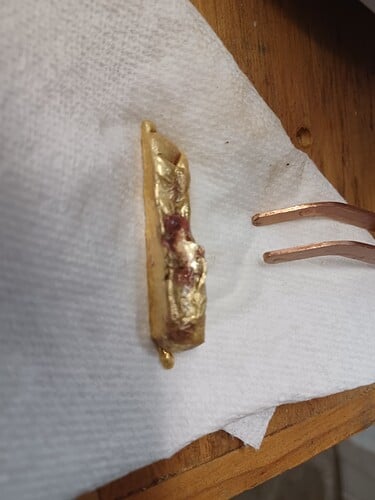 Is the bottom the bar you pour?

Here is the 7th try, and it looks as though only a small amount of copper film on top. Perhaps I should file it out? Pics of top and bottom of poured ingot. 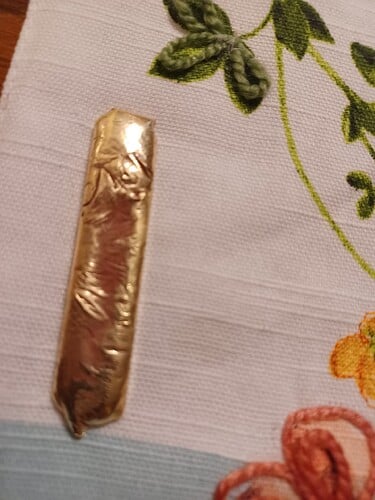 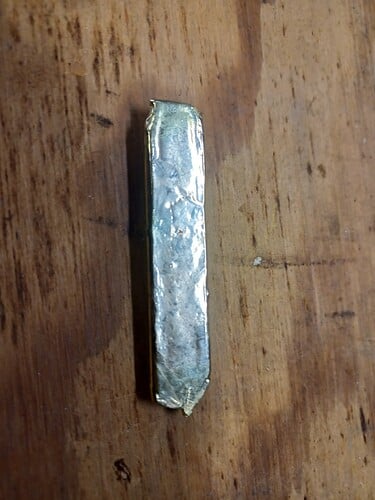 To me it looks like its too cold when pouring.

The last 2 pics of the 4 pics i uploaded. The 4th pic is clean gold (bottom of the ingot) and the 3rd pic shows a slight depression in the center that has a slight film of copper color pooled in that depression. 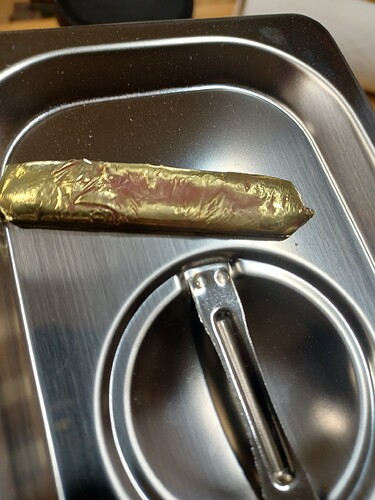 Too cold. Ok. Maybe as i pour it slowly, even tho i keep the torch on it, perhaps the edge of the crucible is cool enough to lower the temp of the melt…? I am moving the flame around the entire crucible, and even preheating it before i put the metal in it.

Just a thought, you could try pouring your ingot in delft clay or even petrobond. It will come out more even than in an open mold and be less likely to cool unevenly. It’s more work, but I use this method when I want a particular shaped ingot…Rob

If you have melted with high heat 7 times, then it must for sure have combined throughly. The discoloration is localized copper oxide on the surface. It’s not unusual for it to only appear in one area. It is only likely to appear on top because the sides and bottoms where against the mold and oxygen exposure is lessened. This will even happen with any stored bought alloyed gold and sterling after annealing.

Anneal the bar and soak it in pickle. Once out, I bet you can wipe away any remaining residue and you’ll have solid gold color throughout.

I make my own 22k, 18k, and 14k with master alloys, as well as from pure Au, Ag, and CU for quite some time. I learned when I was an apprentice and then assistant for a custom jeweler. The only gold alloy that was a struggle was white gold as some of the master alloys require super super high heat to thoroughly melt and mix. I assume they have platinum group metals in the master.

Thanks a lot, you really give me some confidence that it might be fine as it is. I will anneal and pickle, roll out to see how it looks and performs.

Appreciate the generosity of sharing your experiential knowledge.

Sure thing. So, I would love to know how it went?

you are so correct sir!

I am working full time at my regular job, while launching this, so it takes a few days to take the next steps, but I will certainly let you know, and share pics as this goes along.