royjohn…Yes, had I had two hands available, the flame would have been playing over the melt all the time until and while it was poured. I need a photography assistant next time.

kjdesigns…Anneal often and then do it more often. Forging prior to rolling appears, in my experience, to be essential to a good roll. Beat the hell out of the ingot, but in an organized way from one end to the other on all sides.

I revised the Ingot Casting and Rolling pdf per the suggestions made to my original posting last week. I also added pictures of pieces made from the 18 gauge sheet rolled from the ingot in the pdf. Click on the link below to view the revised pdf. 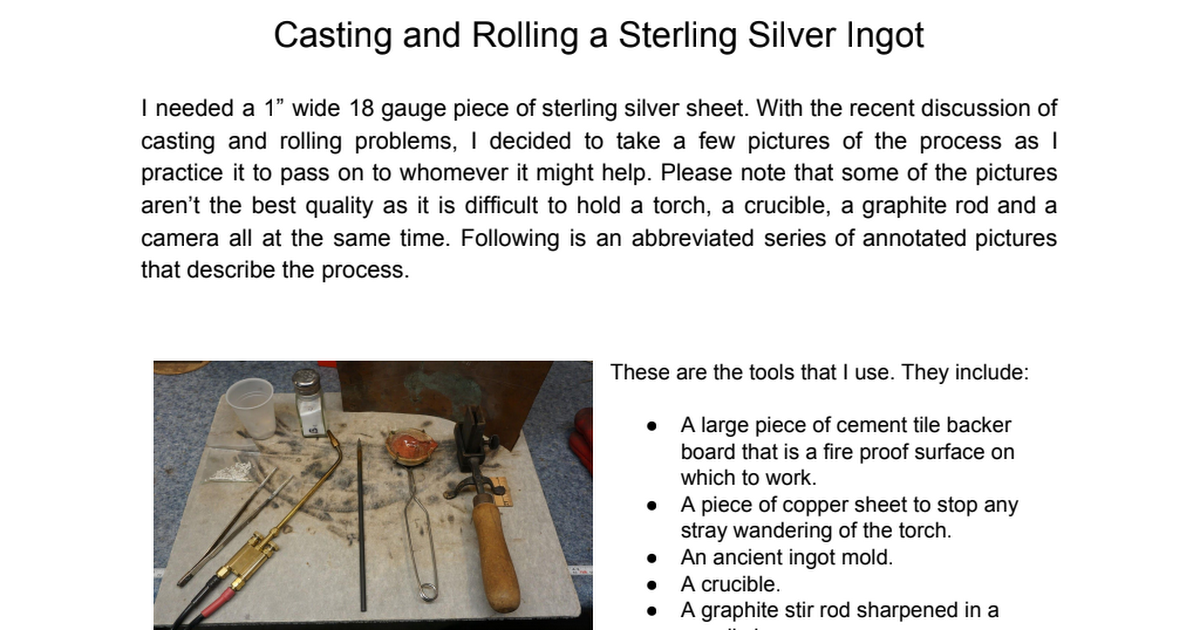 quick question regarding forging the ingot and hammer faces

am i correct in thinking that to forge an ingot for sheet, i would be using the flat face

and to forge a rod for wire, i would be using the thin cross peen (?) side

Not in my opinion… I use a slightly domed peen hammer for all of it. I even forge and rivet (pretty much the same process) with a domed peen, rather than a cross peen. Unless I need to move material drastically. I’ve always found it useful to ask myself “why”. Why do I need to use a cross peen for rod/wire? Why a flatter peen for sheet? Others may have a specific answer and if it makes sense that you should proceed that way. I try not to do something simply because conventional wisdom says so.

For a long time, I didn’t forge the ingots before rolling. It seemed to me that the rolling itself was a percussive process and would take care of things. My ingots were fine. Then I started looking at the ingots in process. The top and bottom were moving ahead of the center mass. I realized that, while there was a compressive/percussive force going on it was uneven and didn’t penetrate the mass. So I started hammer forging first. The ingots were maybe a little better but they felt much better when rolling. Smoother with less cracking maybe. My point is that once I realized what was going on I adopted a new procedure.

I make much of my own sheet, wire and tube. Even .03mm welding wire which I roll and then draw down from thick ingots. Forged with a large low dome plannishing hammer.

I use a cross peen because it is what I have. My only high dome hammer is too light to forge most of my ingots. I remember reading a very scholarly piece in the archives about what happens when you roll vs. forge and why it is a good idea to forge first. At the time it made sense, so I added it to my rolling process and it seemed to improve the quality of my rolled ingots. I will try to find it and post a link…Rob

The first important thing is to have clean metal. Avoid using filings in the melts unless you are extremely thorough with removing foreign metals (always surprising how much there is). I add borax with my fillings/offcuts and I have a large flat surface super strong magnet I go over them with many times until nothing else grabs to it. In the melting procedure I like to add a pinch of Argoflux which is a Potassium Nitrate and Calcium Carbonate mix which cleans your molten metal and bring any impurities to the top where you can simply remove with your graphite rod. This stuff is great when recycling metal (gold or silver). Then just correctly anneal every few rolls and you should be sweet. Goodluck!

Another tip which can be helpful is to file the area where the cracking just starts with a bastard file (flat or half round). If the cracking appears on the corner of the ingot this can easily be done. I would then leave it in the pickle after annealing for a longer period of time. Pickle eats away at steel and these steel impurities are usually closer to the surface of your melts. You should see a difference then.

Among other options, I have used Delft clay to cast odd shaped ingots. They always come out really nice and roll or forge without a problem. I have a pendant that I make and need 1.25" X 18 gauge sheet that I typically make from scrap silver. I have discovered that the best way to make this material is to cast the ingot in delft clay using a piece of paint stir stick as the model. The dimensions just work out. Regardless of what you cast in delft clay, you always waste some after it has been charred by the hot metal. Delft clay is expensive and you can go through it quickly if you do a lot of casting. I don’t do lost wax casting and have no experience with investment casting. My question is, would I get the same results as I get with Delft clay using investment, plaster, clay or some other material to make my mold that is less expensive than delft clay? Thanks…Rob

I have been looking into this product.

I haven’t ordered it yet but I will after Christmas. I was going to ask the forum if anyone has used it and what was the success. And now I guess I have. 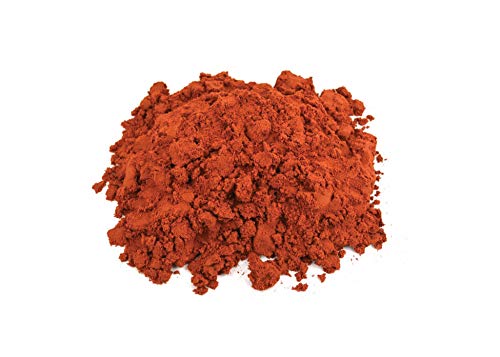 Includes 30 lbs of sand. For use with gold, silver, bronze, copper, and more. Casts highly-detailed pieces

I am not able to open the pdf.
Thanks, Deb

There are two PDF link in this discussion. The first one dated 10/30 doesn’t work as it was removed, it was replaced by the link dated 10/31. Good luck…Rob