Greetings to the Kind Folk of Orchid,

As you can see in the photo I am having trouble making the groove on
the 21 karat posts of the hand fabricated 22 karat gold earrings. I
used a small needle nose pliers and went around the post one
millimeter in from the end. It’s very messy. Any ideas or help on
how to make this groove, so that the clasp catches in it, would be
greatly appreciated.

The clasps are purchased and are 18 karat gold. 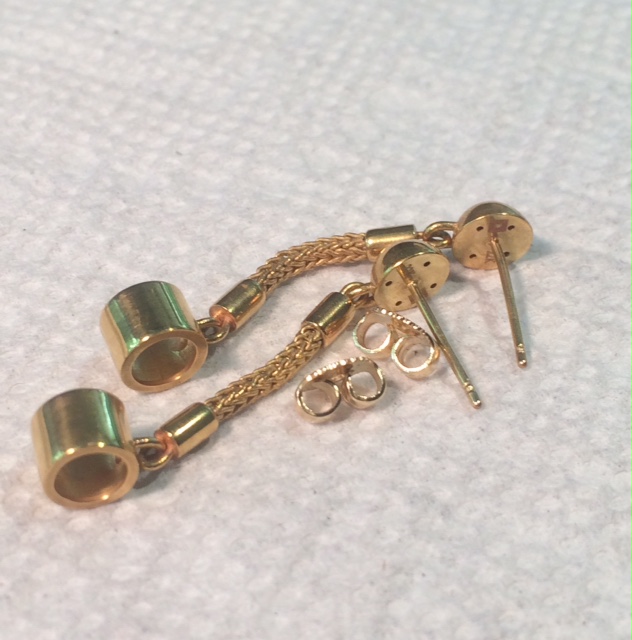 it is fairly easy to remedy: put your post wire in a vise or your
favourite holding device that you can rotate (a tubing
holder/cutter, a GRS clamp, or a ring vise for instance) and with a
sawblade firmly inserted into your frame (if you haven’t mastered
using it by hand yet !). Notch the wire/posts by rotating the
vise/holder equally and level ( relative to to each other), at the
point you’d like the clasps to stop and catch the posts (if you
aren’t using a single length of wire marked where you will cut into
individual posts in the end) insuring you don’t cut too deeply (all
the way through) yet making more than just a scratch into the post
wires. the kerf of the blade and the thickness of the clasp’s metal
should be closely gauged. Ideally the sawblade’s cut can be slightly
thicker than the clasp. Using a triangular or square file will also
work well as long as your metal is at least half-hard to fully work
hardened. Annealed metal will give too much on such a short length!
Finish by tumbling if you have that equipment- if not, just use a
good quality polishing cloth, like Moonshine or Sunshine brands :
both have some abrasive and leave the work nicely mirrored provided
you are after a shiny post. Some people just turn the wire on a saw
held firmly in a vise- the frame keeps the tensegrity correct for the
few seconds it takes to notch the post wire. Using a soft gold alloy
(21-22 kt) be sure that the metal is work hardened to prevent any
unnecessary waste compared to using dead soft or annealed stock.

If you have any questions or need something clarified feel free to
contact me.

I would not use 22 kt. for posts. I can see in your photo that one
of them is already bent.

18 or 14 kt. would be stiffer and easier to notch successfully.

My friends Jack and Lizzie of Zafirro do amazing and beautiful 22kt
granulation jewelry. I have a beautiful suite of their jewelry in
22kt with golden south sea pearls. They use 18 or 14 kt. for earring
posts and other findings that will need the stiffness to be secure
and strong.

If you really really want to stay with 22kt posts try lubricating
with oil when you try to notch them and squeeze very gently with
your round nose pliers. The pliers should also be polished on the
areas you are notching with. It’s like having a polished graver for
cutting or a polished planishing hammer. Makes a huge difference in
how the finished product looks.

I file a tiny blunt spot in between the cutting edges of a nail
clipper and use this spot to “bite” into the ear post in a twisting
motion to create the groove.

I altered a pair of cutting pliers for making earring grooves, by
cuttinga series of 3 progressively smaller grooves in the cutting
edges.

Much easier to do before posts attached to earring. I would consider
removing posts, chucking post into flex shaft, spinning it against a
small file. In effect a small lathe. I have even used a jewelers saw
instead of a file but that’s tricky as you may go too deep. Gary

I do the groove in earring posts with a grooving file of the required
thickness (picture attached). If you don’t want to invest in this
tool, you can just use the tip of a round file. Make the groove
before you solder it to the earring so you can hold the post in a pin
vise, which you can easily twirl as you file… Alternatively, you
can hold the post in a flex shaft, and while it’s spinning, touch the
file to it just long enough to get the groove depth you want… You
could also use a saw blade the thickness of the desired groove. In
this case, it’s safer to twirl the post against the blade so you
don’t overcut at one point by actual sawing…

Rather than needle nose, I use round nose pliers (both jaws are
tapered cones, round cross sections tapering to a point. Make sure
the jaws are clean, without nicks or scars. Preferably pretty smooth
or even polished, though that’s not absolutely necessary. Choose a
point on the jaws where the diameter of each jaw is slightly less
than the diameter of the loops on the friction clasps, so the notch
will be a decent fit for the shape of that portion of the clasps
that need to fit into the grooves on the post. Now, grasp the posts
with that portion of the plier jaws and GENTLY squeeze, to produce
slight dents in the post. Rotate the posts 90 degrees, and do it
again. Rotate 45 degrees, repeat, then again and again, so you get
multiple dents all around the post. Now go over these, or as much as
possible, between them, smoothing out the ridges between the dents.

doesn’t need to be perfect, just roughly in the right place. Once
you’ve established these dents, now gently holding the jaws just,
rotate the posts so the jaws burnish the groove, smoothing the
individual dents into a continuous groove. what you can end up with
is virtually identical to the commercially made posts, where the
groove is put in by a linear burnisher rolling along the post.

You have to be careful in the burnishing step to hold the post
loosly enough so the jaws burnish around it, rather that gripping it
and then twisting the post.

You might also wish to twist the post to work harden it (though that
may not be very effective in high karat gold like 21K), but you
should do that seperately from making the groove. If, after you’re
done making the groove, the outside little bit ends up slightly bend,
you can easily enough bend it back in line with the rest of the post.
Then round off the outer end of the post, and make sure the friction
back fits. It should click into the notch, but should not be so tight
as to require much force, especially to push on, since the high
karat posts will be fairly soft. A little drop of oil on the friction
cluch will help that too.

Send pictures of the alterations of pliers, please.

Chuck the post in a #30 handpiece. Spin. Grab/pinch with polished
round nose where you want the notch. The groove/notch is swaged in,
the metal compressed rather than removed as it would be with a file.

One of the many tricks that I teach in my one day, demo only
Flexible Shaft class in Seattle.

I do the groove in earring posts with a grooving file of the
required thickness (picture attached). 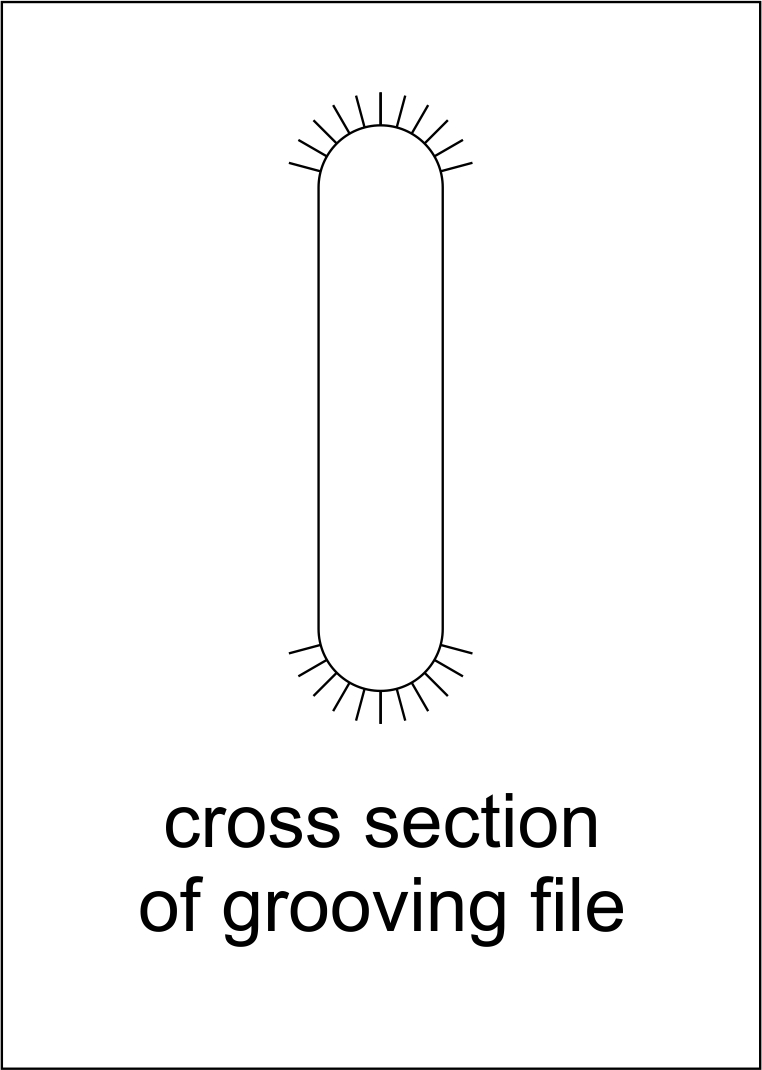 If you don’t want to invest in this tool, you can just use the tip of
a round file. Make the groove before you solder it to the earring so
you can hold the post in a pin vise, which you can easily twirl as
you file… Alternatively, you can hold the post in a flex shaft,
and while it’s spinning, touch the file to it just long enough to get
the groove depth you want… You could also use a saw blade the
thickness of the desired groove. In this case, it’s safer to twirl
the post against the blade so you don’t overcut at one point by
actual sawing…

I altered this old worn out pair of wire cutters to “cut” earring
post grooves. I rubber wheeled away the worn cutting edges, and then
cut and polished three different sized grooves. Metal is not
actually cut, but compressed to form a smooth “notch” This allows me
to add grooves in mounted posts of all sizes. 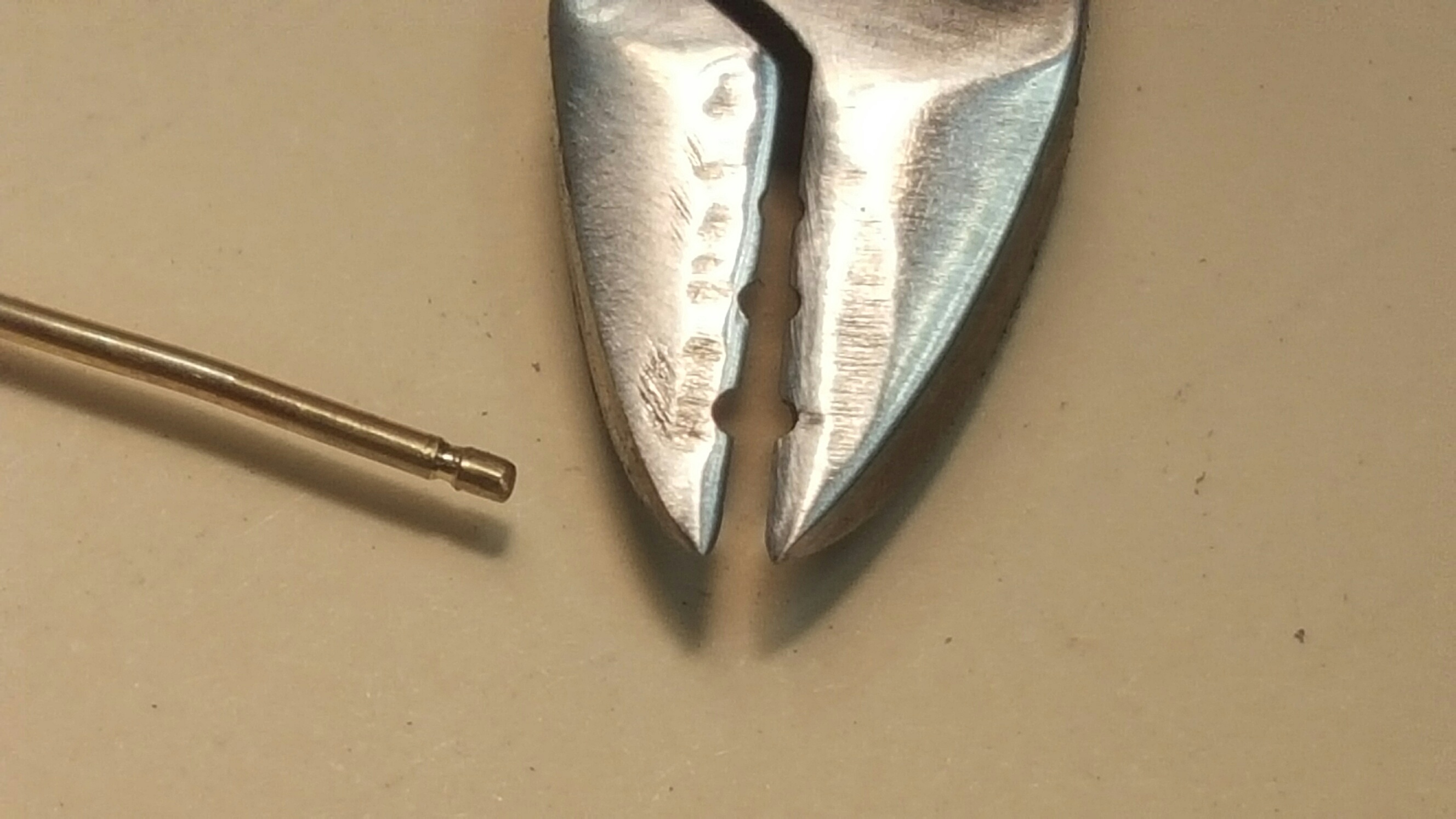