I am looking into buying a used or new pneumatic engraver or mainly for stone setting Bead and bright cut with graver . What machine would you suggest and why ?

Hi there, since I don’t know your level of experience or budget, it’s a little difficult to give a short answer. At the low end of the scale is a foredom handpiece that is a mechanical hammer. It is fairly good for setting stones and can be used for engraving, but it is a little crude. The next step up would be one of the more basic machines from GRS, their Gravermiester is a self contained unit and can be found on eBay, the system 3 and GraverSmith are fairly basic systems that require an air supply from a compressor. Their GraverMax and GraverMach systems allow much greater control over stroke speed and power than the other systems. My personal preference goes to the Steve Lindsay Classic handpiece with foot control. It is also air powered, but conumes much less air than the other machines. With the standard piston it will engrave and set stones with ease. If more power is needed there is an optional tungsten piston. Do not, under any circumstances buy any of the cheaper Asian knockoffs. Their performance is dismal.

Thank you for your feedback . I am experienced jeweler . I have not done bead and bright cut setting in years .I once downed a GRS but have sold it I found it hard my shoulder ?!!
I heard of Lindsay, EnSet, and Jura . I wonder if people have used these .
Thank you

Ever tried using the basic of gravers; Onglette #1 & 2, Flat#40?
Why spend so much of your hard earned $$'s on those expensive machines?

Gerry! from my mobile-phone!

I don’t know why you had problems with the GRS system. Both systems are set up to lighten the load and give you a traditional engraving style so it should have been easier not harder on your body.

i can only suggest that it you had issues wit the GRS you will probably have issues with the Lindsay.

I would suggest finding a demo model and give it a try before spending the money.

I missed this great photograph of the hammer-tip that I use!

Gerry! from my Toronto IPhone 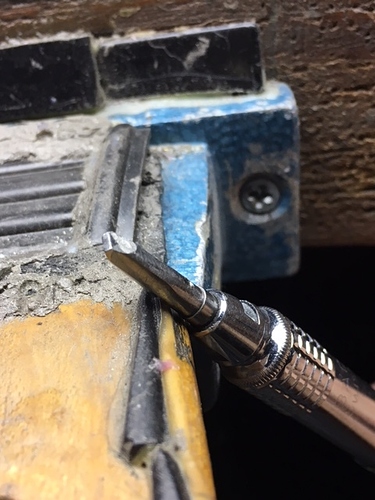 Nice idea to sort of cut curve in sides

Hi Gerry,
I get the idea on the hammer handpiece tip, but, forgive me, I would love to have a dimensioned sketch. It looks about like a screwdriver blade, but I’d like to know how long and wide the actual rectangular tip is and perhaps what the angle of the bevel on the long side is…looks like about 80 degrees…the other sides seem to be close to 90 degrees. Is this tip about 6mm long and 1.2mm wide? Inquiring minds want to know…or does it not make that much difference as long as the shape is right.

Thanks again for all you do!
royjohn