Hi Guys Just wondering if anyone out here has played with this stuff
yet? Have they got the solders done? How does it look? Any info
would be great.

I spoke to the people who sell the platinum enhanced silver at the
Tucson show. I think their attitude is correct when they don’t
compare it to standard sterling silver. At $60 an ounce (the price
quoted at the show) it really isn’t in the same class as sterling.

The question I would pose is whether one could produce a line of
jewelry that could support the price. In the case, a standard
sterling item would look the same as the platinum enhanced example,
at least for the first 3 months. Would the average consumer be able
to wrap their head around the need for the extra cost? With
flatware or hollowware I can see the marketability because anyone
whose owned silver knows the hassle of polishing.

I’m going to give it a try, just because I’m a geek for this kind of
thing. I’ll be able to compare it to the Argentium silver I bought
a while back too. The thing I’m interested in is finding out
whether the platinum enhanced solders will work on the Argentium.
Once I do some testing I’ll let you know.

They do have platinum enhanced solders too. But as far as I
remember only in medium and soft.

Even more interesting to me is the new platinum enhanced 14 and 18
kt gold. I really like the greener golds, but even fabricating
doesn’t harden standard green gold enough to make it suitable for a
lot of applications. The platinum enhanced metal seemed much
stiffer, though I’d really need to play with it to accurately
compare the two. But it seems promising and the price difference
between standard green gold or the more European color and platinum
enhanced isn’t as great as standard sterling and platinum enhanced
sterling.

This is not entirely new, but I just heard about it yesterday – the
new Platinum Sterling. Has anybody tried it? It seems pretty
exciting.

Below are some links, for those who, like me, missed it the first
time around. 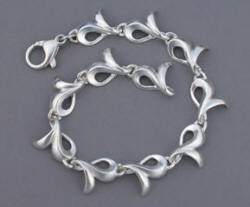 This one shows rolling out a billet to .15 mm thick without
annealing:

Information and educational services for everyone interested in gemstones. For gemologists, hobbyists, jewelers, lapidaries and everyone in between.

Contact Info for Buying & Questions: This is a patent pending product
and owned exclusively by ABI.