I recently designed some clasps and vaguely thought about trying to
patent them. Now other people are suggesting it, too. I know nothing
about this, and wondered if any of you have patents or know the pros
and cons of taking this step.

Any comments will be greatly appreciated.

Step 1: there are two types: design patents, and practical patents.
Design patents just protect your particular design of widget, and
are easily avoided. Practical patents patent an entire functional
concept, like the basic notion of an incandescent filament to make a
lightbulb. Those are much harder to get around, and exponentially
harder to get approved, and cost accordingly. (The biggest criterion
(other than being able to afford the lawyer) is that a practical
patent needs to prove that nobody else has ever done anything
similar before.)

Step 2: patents are expensive. Figure $10,000 US, at a minimum for a
well written, defensible practical patent. (Written & researched by
a patent lawyer.)

Design patents are cheaper, on the order of $1-2,000, but they’re
not really worth anything other than bragging rights. Especially for
something that’s been done for as long as jewelry clasps, the odds
that you’ve got a design unique enough to get a practical patent are
low. Which leaves you with a design patent, which might be worth a
few grand in PR value, if you’re marketing your line “with new,
patented clasps…” but isn’t going to be worth much more than that.

Step 3: even practical patents aren’t worth much these days for
little people. A patent is basically a license to sue someone to
keep them from knocking off your patented product. If they’re doing
it in a country where the courts don’t care, it’s irrelevant. The
best you can do in that case is keep them from importing the
infringing product into countries where the courts do care. But the
legal bills to do this are all coming out of your pocket. So it’s
basically a license to pay for your lawyer’s kids college tuition.

Sorry to be the bearer of bad news,
Brian.

You don’t say where you’re from but few countries (Australia being
one) have any sort of patent “registration” system. Most countries
where you’d likely gain any benefit from a patent, including
Australia, have patent application examination systems where your
application claims are thoroughly examined (as part of your
application fee) for novelty and non-obviousness. Study my sig links
then do some more homework and make a business decision as to what
you want to do from there.

A couple of possible show stoppers though since you note that others
are suggesting you patent. If you’re already selling these clasps (or
have even offered them for sale or otherwise made the design’s
"public" knowledge to even a small fraction of the public under no
secrecy agreement) then there is no country in the world except the
US, Mexico, and Canada where you would have any right to a patent at
all and in those three countries if that sale (or offer or public
knowledge) was over 1 year ago then even those countries bar you now
from getting a patent.

patenting means that the clasp itself has to be unique- not a design
based on a spring ring or toggle or lobster. Design copyright is
probably more what you are looking for. Patenting is a more lengthy
costly project… copyrights to a design are a bit faster but again
do your research and figure out if you are going to produce them on a
mass scale, enough to market them to a major industry /trade
wholesaler or distributor, to warrant the legal process
involved…rer

I’m not a lawyer, but I did receive a utility patent on a mechanism I
developed a few years ago. First, there are 2 kinds of patents:
design and utility. I’m guessing you are wanting a utility patent. A
design patent has about the same strength as a copyright, which means
that it’s not a terribly strong legal deterrent. A utility patent is
a better deterrent from copying than a design patent. You can save
yourself money by doing your ownresearch of similar mechanisms
through the on-line patent office. Second, you will probably have to
have an engineering drawing done for the application process and a
lawyer to file. Third, it’s not a cheap endeavor either. So, think
about the commercial value of your patent as to whether the expense
of getting a patent has a positive cost/benefit ratio. Once your
application is in the pipeline you may stamp your work with the
patent pending number. Once approved (and it may take a year or
longer for this) you will be deluged with offers to license, sell,
and market your patent.

All that being said, I have spoken to many people about this issue
and it may be better to simply be “first to market” your design.
Hope this helps and I defer to any of the lawyers who post on Orchid
if my legal is incorrect or outdated.

i would say this - i was told PATENTS involve lawyers and tens of
thousands of dollars.

COPYRIGHTS ARE CHEAPER. you can download the application from the US
Copyright Office. it takes a few months but they keep records. you
can add your designs to them and they are yours. you have at least
several years for your design to truly be yours without someone
hacking you without a COPYRIGHT so please if you have something
original take photos document each step and by all means get a
copyright if someone licenses the use of your designs then take the
money and get an attorney that specializes in PATENTS then get one.

The Inventers Handbook on Patent Applications
by Tina & Gerald Redmond 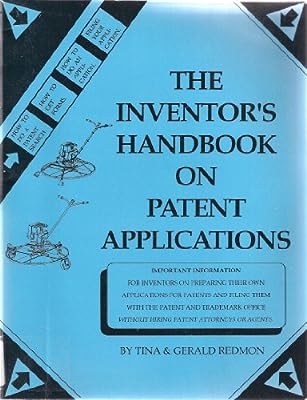 The Inventor's Handbook on Patent Applications