I placed my first on line order with Metalliferous on Monday, I have
visited their store and have ordered over the phone for many years.
The order was very easy to place and I had a confirmation of all
costs as well as availability. 16g, 18g and 11g Sterling wire all
marked as In Stock. I then placed an order with my other supplier and
was anxiously awaiting delivery of all my supplies. I just got a call
from Metalliferous that all the silver I ordered is on back order for
approximately three weeks. Now I am involved with extra shipping
charges because I must order my silver from another supplier plus my
customer has to be informed that his necklace will be delayed. When I
asked Metalliferous if they could help me with the one item left on
my order and pay the shipping charges, because I now must incur extra
charges because of them, I got a big fat NO. The shipping cost would
have been $9.50 to a customer of 9 years.

I don’t usually comment, but I have to say that Thunderbird is
great… also they have a 500 oz sale a couple of times a year and
it doesn’t matter how much you purchase… just my humble opinion…

I placed one order with them. It was an online order. I will never
do it again online or otherwise…

I would cancel the order in total. and go else where. I have done
buisness with them in the past, but will not do any unless I am in
NYC and go in pick what ever I need or they have and pay cash, no
service. their customer service is way below par, even when you are
there in person, they think it’s cute or adds character when they
treat you like crap. I just walked away and never looked back. there
are some amazing stores and companies with much better goods and Much
better service. go there on line or phone or in person.

I recently phoned them to ask about an item that they used to have
but didn’t see it in the online catalog. The person who I was talking
to actually accused me of LYING that it wasn’t there!

IMO they get the award for ‘Most Rude Company’ to deal with.

I, too, only go to Metalliferous in person, and they are not very
chatty, but they do know their stuff, if you have a particular
question. I prefer a curt but accurate response to one that is
friendly but uninformed. And they have many things that cannot be
gotten elsewhere. I love visiting there, for that reason.

I used to buy with them as well, I got frustrated when I would ask a
question and be ignored or feel like I was being a bother. I tried to
be friendly (not that anyone has to be friendly back) but it I felt
like I was being a pest. I didn’t feel very happy with the answers I
got, and all the backorders.

I decided since I needed copper figures for enameling I would start
to make my own, I figured out how to do it, and now it turned into a
business. It is how I am helping the girls here. We have a website
now for sales. I am located in Mexico, so shipping is slow, but I
feel my product is worth it. We can make as many of any of my items
that you want. We have brass, bronze, copper, nickel silver and
limited sterling silver (which we plan on increasing in the future
slowly)

While I don’t have everything they carry I do have a lot. I have more
copper figures and forms than they do. The website is new, it might
have some bugs, please be patient with it. Anyway, we are looking
forward to new customers. We also have an Etsy store it is 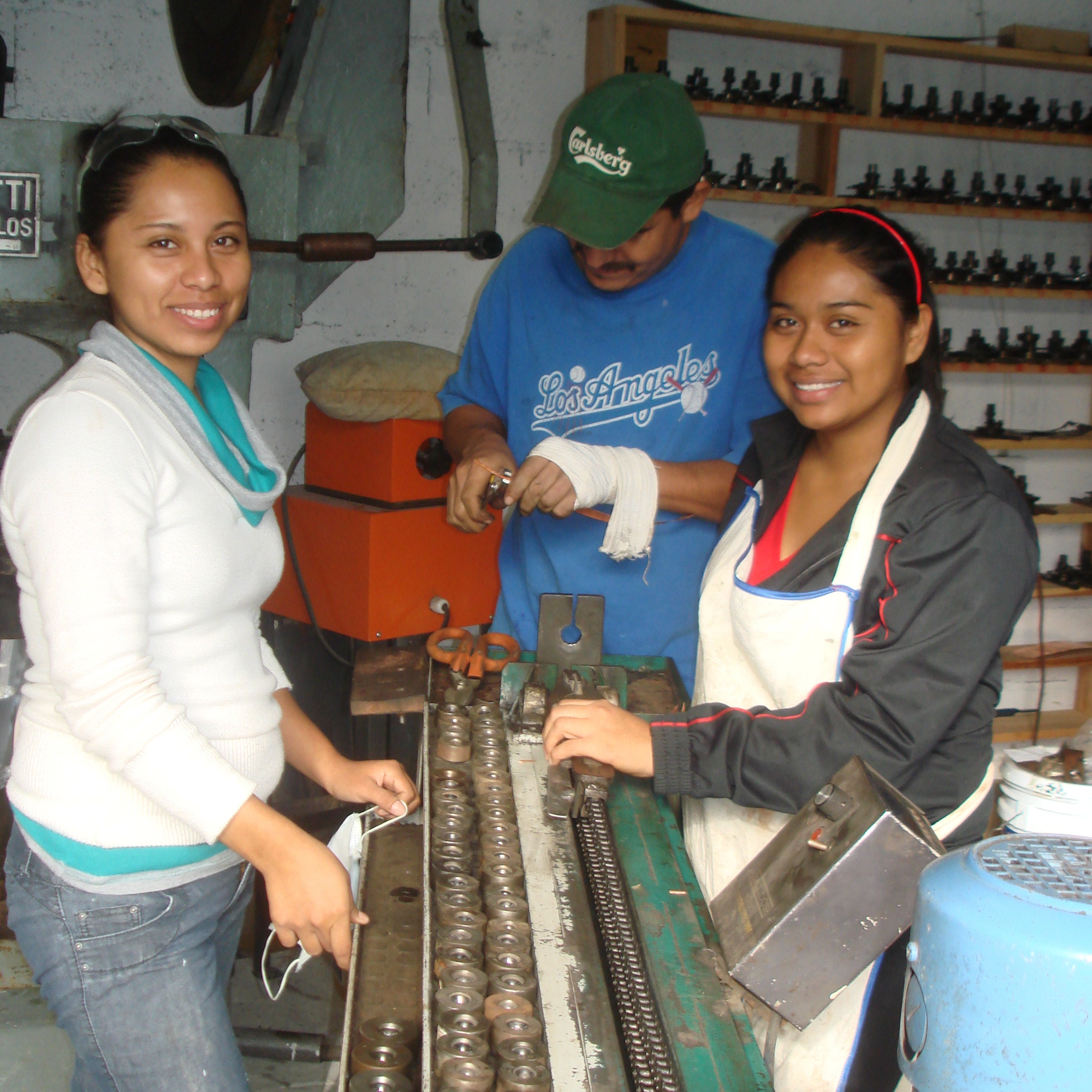 Supplies for the Crafty Divas out there! by SupplyDiva

Browse unique items from SupplyDiva on Etsy, a global marketplace of handmade, vintage and creative goods.

we have close to 1000 positive feedback, we are very reliable! If
there is something I can help with just email me, I will be more than
happy to try, I can’t promise anything, but I will try. Regards
everyone!

Don’t take it personally. New York City can be harsh. It is a
different culture than most of the rest of the country. I don’t like
it either (the NYC manner), but Metalliferous is a treasure trove of
cool stuff, great deals and things you are not going to find in
other places. I always stop there when I am in Manhattan and always
recommend a visit to any jeweler/metalsmith who is visiting.

I’ll not order from them again. I placed an order well in advance,
like three weeks or more, in order to receive it while I was still in
the States. Even though I told them my deadlines they didn’t ship it
until the last minute. It arrived the day before I left the States.

For what it’s worth - while visiting NY a few years ago I stopped in
at Metalliferous - I found tools like dapping punches, hammers etc -
tools which require smooth polished working surfaces - all piled
roughly in bins, unprotected from bumping into each other. I thought
that was awfully rude to the tools - many of which had dings and
scratches on their surfaces - evidence of this casual treatment.

As to personal rudeness to me - to tell the truth I probably wouldn’t
have noticed because i grew up in NY and, while i don’t enjoy NY
attitude, I accept it as the normal operating style - but only there
in NY. I can slip back into that mode if needed but I don’t think it
is necessary, helpful, nor even picturesque, quaint, or charming.
Generally it presents as bored, unconcerned with anyone else’s needs
or feelings, somewhat annoyed at almost any request, and a sort of
supercilious, seen-it-all-before look. I sort of understand it -
every relationship begins as an adversarial one - a protective filter
against the incredible, unnatural pressure of just too many other,
equally stressed people coming at you all the time - a sort of test
that people must pass, requiring one to reciprocate in a manner
sufficiently clever or strong to pierce the membrane - but really
it’s not the only way. Living elsewhere for many years now I
appreciate the toll that tough NY style takes on people - both sides
of the transaction - it is just a big energy suck. Even now, many
years and miles away from where i grew up, I get a really big kick
out of simple ordinary courtesies like strangers smiling and saying
hello to each other on the street instead of averting eyes and
ignoring each other. It seems delightfully exotic. Here’s something
else I really can still hardly believe - people almost invariably
call out “thank you” to bus driver when they get off at their stop,
even teenagers! It’s like being on another planet…

To people unfamiliar with the NY attitude it must seem
extraordinarily rude and uncouth but don’t take it personally and if
confronted with it, don’t try to take on the thankless task of
reforming or enlightening the person on the other end of the phone
line - Just focus on your needs, persist firmly with your requests or
questions - if ordering something ask when it will come and by what
shipper - get all the details, get the name of the person for any
follow up calls etc and be thankful you don’t live or work in that
environment

Marty, far away and grateful.

Marty’s comments on ordering from Metalliferous is a well said
description of doing business there. However, the location of that
business is in the diamond/jewelry district of NYC and that area
remains its own culture. It is a very closed, secretive,
ingroup/outgroup place. Not only don’t take any brusqueness
personally, recognize that you are in a special world when you go
down 47th street and neighboring areas.

Be about your work, not ladies out to lunch, be professional,
specific and busy. I have bought items there, a fascinating array of
equipment, tools, seconds, odd lots from unknown places and I always
went there if I was to be in NYC. Don’t expect the salespeople to
chat or be concerned about niceties but if you are serious, they can
be cohorts for discoveries. One time I was there, wandered into a
back room with a table covered with an array of brass pieces. An old
man was tending the room and explained to me how they had just
gotten this collection lot in. I still have some of the little
discoveries.

You can still remain polite and say thank you, but it’s not a “hurry
back, y’all” place.

To expand the discussion: Metalliferous must have experienced some
economic strife in the past year or so. The store has drastically
reduced its size, moving from the second to the third floor of their
building on West 46th Street. The old store was a treasure trove of
miscellaneous ‘stuff’ in hundreds of bins that one could rummage
through at will for as long as you wanted (I always wondered about
the amount of pilferage that occurred). The staff is/was
’independent’ and I will leave it that. The new store has one tenth
of the floor area, limited bins for exploration, and no access
behind the counter. I do not personally think that the prices were
that low but the store did have just about everything in one place -
a reason to shop there.

I only go there when I can’t find what I want at AllCraft which can
consume many more pages of commentary.

I experienced their rude and poor customer service. Rudeness is never
acceptable no matter where you are.

Bead Me by Linda Minor Inc.