Like all of my work, my main focus is in the combination and unity of different materials. In addition, my work while technically within the realm of jewelry and metals, but its form and function tends to place me in the fringes of the overall field.

At a young age, I was intimately introduced to the knife, as I underwent over a dozen reconstructive surgeries to correct several facial birth defects. Throughout my formative years, sharp surgical instruments were in my face, both figuratively and literally. These unusual encounters led me to view the knife/scalpel as a symbol of regeneration. Overall, I was appreciative and thankful for their transformational function and ability. Yet, because of my experiences, I was also forced to contemplate and question the meaning of beauty and imperfection.

In my quest to comprehend the aesthetics and the meaning of beauty, I became fascinated with both art and culture. I traveled throughout Europe, Africa, and the Middle East and spent a great deal of my youth exploring the great museums of the world. My appreciation of art, history, and my overall understanding of life, was shaped in large part by my exposure to the world’s great masterpieces. I was also greatly influenced by exposure to archaeological relics, especially tools, arms and armor. My fascination with edged objects developed as I contemplated their historical and personal significance.

The knife is an art form unlike any other. It is defined by both its form and function, while also simultaneously evoking a wide range of associations. This poses an interesting challenge on how to create an art piece out of an object that is so steeped in specific physical and emotional definitions.

In a knife, I am able to express and embody my great love of beauty, through materials in a combination of color, pattern, texture and composition.
As an artistic platform, the knife also allows me to explore my fascination with a hand-held object that can serve as an extension of the body. I am intrigued by the implication of an object whose functionality is specifically controlled by the body, which in turn creates the function to be ultimately dependent upon the person handling it. This begins to touch upon the idea and controversy of the knife that is purely perceived as a weapon and the ultimate physical personification of violence. In reality, the knife is a object that can cause no harms on it’s own accord; it’s power lies in the hands of the person wielding it. In my work, I am bridging and exploring the different contradictory themes and ideas that can be placed upon and epitomized through an inanimate object.

From an esoteric perspective, I see my art-knives as a physical representation of the ideology of dualism. I create objects that seamlessly hold beauty and violence concurrently; two opposing concepts that are being explored and equally represented in one place. I am intrigued by the psychological and spiritual implications of being attracted, yet repelled by the same object.

I am a classically trained goldsmith and sculptor with a degree in Jewelry + Metals from Rhode Island School of Design. For the past 18 years I have worked relentlessly to redefine my chosen medium, broaden its horizons and change public perceptions regarding knives. 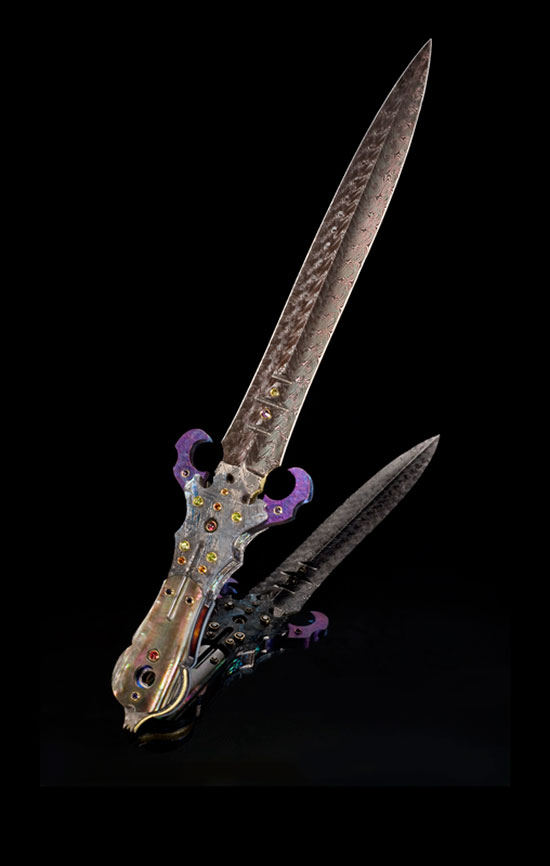