Just because some of us have been talking about vibratory finishing,
and I had to play forklift tetris to get this thing into the shop
today, I figured I’d put up a picture of Knew Concept’s newest toy.

So… Say hello to our little friend. 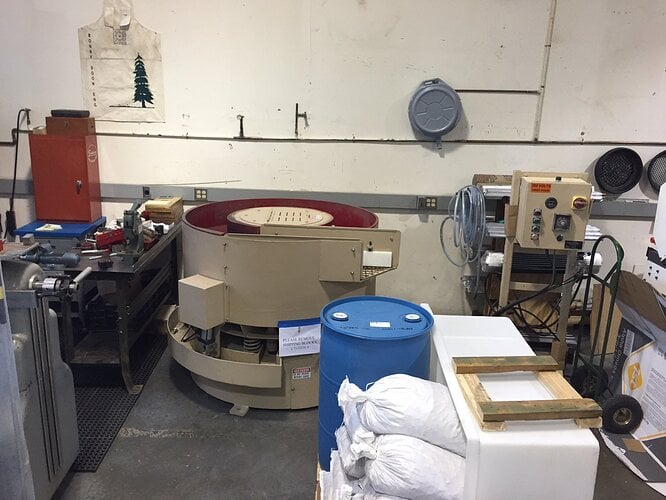 What have we gotten ourselves into?

The cool thing about it, in comparison to the normal jewelry scale
vibratories, is that it can unload on its own. That’s the ramp
across the front of the picture. You just flip the ‘unload’ lever,
and the parts march right out on the ramp. (assuming they’re bigger
than the media.) It also has automagic flowthru. That big blue drum
is 55 gallons of soap/fluid concentrate for it. It has a little pump
unit that you dunk in the drum, and it automatically meters out the
soap on the fly.

The really scary thing is that big as it is, it’s still too small to
do our 8" sawframes. We got it for doing some of our newer larger
parts, which don’t fit in the old machine. Besides, this one will
give a much better finish, in about 1/4 the time.

Lee keeps saying that Knew Concepts was supposed to be his
retirement after Bonny Doon. You know, just putter around, make a
few saws every now and then. Little stuff… Funny how it turned
out, no?

pictures so seldom that I don’t remember where that is. Thanks. Brian

For all of you doubters about tumbling - this one is considerably
smaller than the ones I’ve seen at the mint and at Stuller. It’s how
you get work done - it can be on a large or small scale. It is
mind-blowing how effective it is.

HI, Just a thought about putting liquid glass, or even “just” hot
enough glass that has not been annealed yet ito water to acheive the
mentioned “teardrops”…(+500 degC) Its a little inaccurate the
description givenof the teardrop making. The hot glass is not put in
water. Try it with a hot marble, doesn’t even need to be liquid. It
shatters. (“Fried marbles” are a common childhood experience.) As
does all types of glass that are that hot. The tears are allowed to
cool “superfast” just by allowing them to cool down on their own.
They will have no signs of tension in them until effect, or 2.
scratch their surface or mark them with a glass cutter, or break off
their tail. They litterally “explode” in a superfine dust. with the
sound of a loud handclap. If you happen to be holding it in your
closed fist, you’ll just wind up with a hand full of powdered glass,
and a scare, if you were not expecting it. But not with water.
Believe me. I make them.

The reason why it happenes was correct as already stated.

where is Mallorcas winter hiding? its 25 degC still.