A woman in my jewelry class was wearing a pendant she purchased in
Australia. I believe she said it was made by Mauri craftsmen. It was
about 2 inches long on a cord. She has one that is white and one
that is black. It appears to be made of a “braid”. The overall shape
is slightly oval but it is carved in such a way as to appear
braided. It’s gorgeous and incredibly well done and I believe it may
be made of coral or possibly a fine jade? Do any of the list people
from Down Under know what I am talking about and where one can
obtain one via the Net?

“I remember your eyes were bluer than robins’ eggs. My poetry was
lousy you said. Where are you calling from? A booth in the midwest”

Judy - What you’re referring to is probably a pendant made by the
Maori, who are the native people of New Zealand. If it looks like
jade, it’s probably a stone they refer to as “greenstone”. The Maori
are famous for their carvings; they also do them in bone, shell and
sometimes mammoth ivory. You might want to check out some of these
sites for examples of their work… 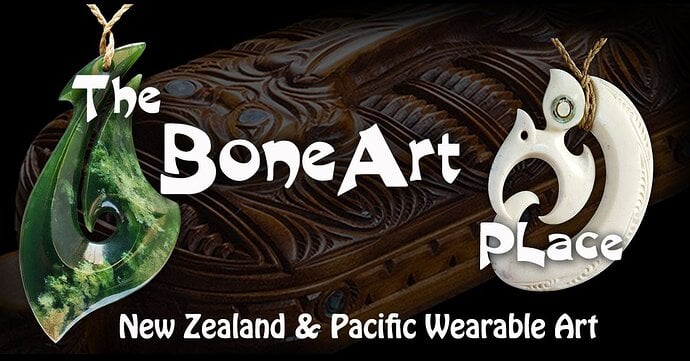 Well, the Maoris are New Zealanders, not Aussies. And that nice jade
(if it is jade) is also from New Zealand. They do some really nice
things with it! So to find one you had best look to NZ. You might do a
google search for something like New Zealand jade carvings, or Maori
jade carvings – …

John Burgess, what do you suggest??

Dear Margaret, Hate to burst your bubble, but much of the so called
Maori jade carvings coming out of New Zealand are actually carved by
the Chinese and are British Columbia jade. The New Zealand jade is
gorgeous stuff, but has long since been in very short supply. Nor
would I demean the Maori designs; the fact that they have been
widely copied is testamonial to their appeal. Ron at Mills Gem, Los
Osos, Ca.

This Greenstone Jade is found on the south-west coast of the South
island of New Zeeland. One of the most scenic areas in the world in
my opinion. The Lord of the Rings movies were filmed there.

The designs appear to be derived from Maori native tattoos. A search
for “maori jade” on Google listed about 75 websites.

You may want to consider going there yourself to obtain your own.
There is a school there that teaches you to design and carve your
own.

G’day. For a start it isn’t Mauri. It is Maori, pronounced
Mar or ee, the name the native New Zealanders call themselves. They
call the material ‘pounamu’, literally ‘greenstone’ which is known
also as Nephrite Jade and they call New Zealand,. ‘Aotearoa’ "Land
of the Long White Cloud… The South island they call Te Wai
Pounamu’: ’ The Waters Of Greenstone’ . As it is very hard yet
tough, the early Maoris used it to make tools, particularly cutting
tools, like knives, axes, chisels, gouges etc for wood carving. I
have seen a modern Maori demonstrating with a greenstone carving
gouge, and chips were coming away as if it were of best steel. Much
better than flint tools. There is a deposit of jade, mainly of huge
boulders, in the headwaters of the Arahura River, near the West
Coast of the South Island.

Visitors are welcomed to walk around and talk to the workers at the
West Coast Jade Company, in Hokitika, and hopefully, buy some of the
beautiful highly polished artefacts.

Maori lore regards greenstone artefacts as ‘Taonga’ - treasures, and
they are worn around the neck from a cord of native flax.

Such Maori Taonga are handed down over the generations, when they
take on the ‘mana’ (spirit) of the maker and each of the wearers,
so that ancient pieces are without price… In Maori lore nobody owns
such things; they are regarded as caretakers of them.

Practically every jeweller’s store in NZ sells them, however.

As Margaret Malm suggested, try “Jade” with Google, and you will be
overwhelmed with ‘hits’! The best jade is medium green, free from
black, and translucent - just let the light shine through it to
admire it’s beauty. I’m a fan. Does it show?

these maori motifs and pieces come from new zealand, but are made in
australia by new zealand artists as well. go to a web site in nz
(ie new zealand craft council). they have fantastic galleries and
artists doing this sort of thing. they are made from different
materials, from jade, bone and even obsidian.