I recently have gotten proper casting equipment and my first cast
with the oven and vacuum caster were wonderful. I used deox silver
and everything came out really nicely. The castings were smooth and
porosity free. During the last two castings i’ve lost some major
models to the worst porosity i’ve ever seen. Some of the models have
holes that permeate through and through.

The results have been pretty horrible. I included some pics so you
guys can see. Any tips??? 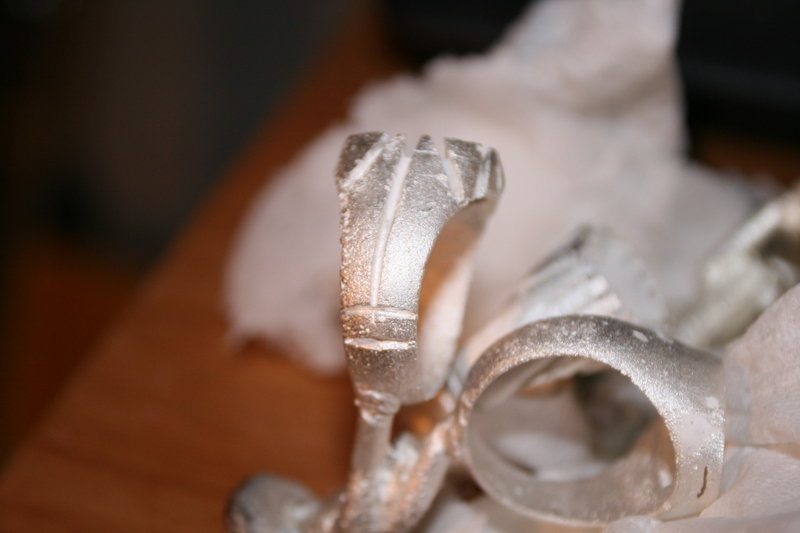 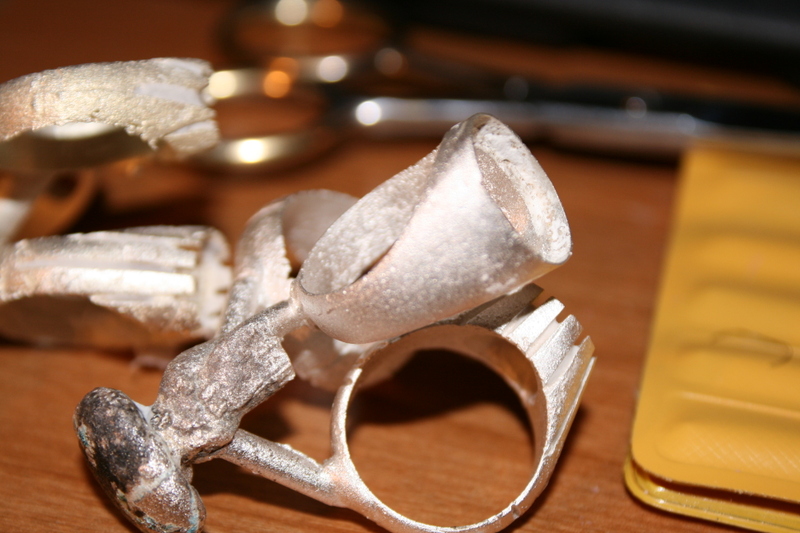 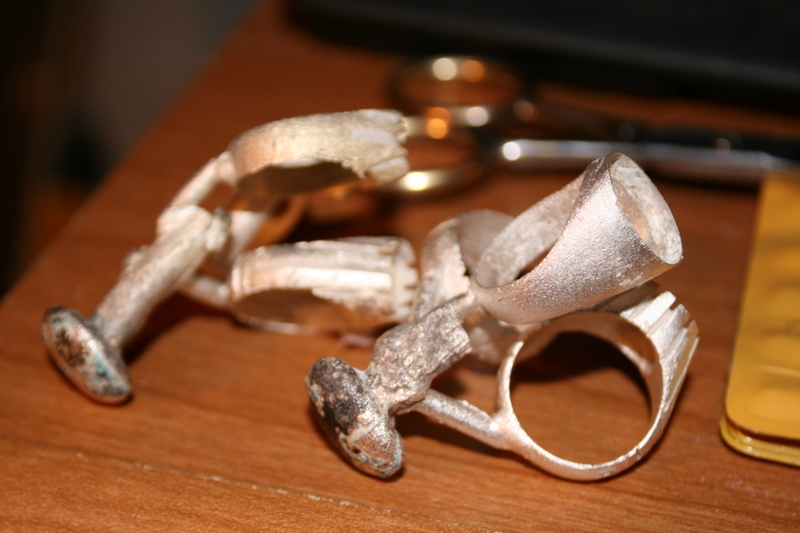 First off, you’re casting WAY too hot! I do filigree casting, really
delicate stuff, with vacuum (just cast 402 components in 6 flasks
today in fact!) and I cast at 1150! I take it up as high as 1325,
according to my books, then down to 1150 and let it sit for a while
there, maybe an hour or so before casting. You are doing heavy
rings…you should probably be casting with a flask temp of about
800-900 degrees F. My work is superfine, so it cools the silver down
faster. If you are casting big pieces at 1250, it basically sits
there and boils in the mold.

Also, what is your percentage new vs. precast silver? This should
never excede 50% precast(used) silver, and make sure you have little
or no solder in the pieces…

It looks to me like overheated metal and too hot a mold. Those
surfaces show investment breakdown. You need to have your flask down
to 900-1000 F before casting and make sure your kiln is calibrated.
Watch your metal temperature as well because those castings look
like the metal was molten way too long and there is some serious
metal/mold interaction. Casting is a multi variable process and there
may be other issues that are effecting your results but, I would
start looking at your temperatures.

The combination of your mold and metal pouring temperature of the
metal is way too high.

Air bubbles that are inside the castings also indicated the
temperature combination is way too hot.

The surface roughness could be caused by not burning our long enough
at the top temperature. Carbon left in the mold due to incomplete
burnout will cause roughness on the surface of the casting and
possible holed in the casting.

I usually have a 16 or more 2.5 inch flasks in my burnout when I
cast. I stack short flasks two high. I pack as many flasks in the
oven as I can. I am not sure if it helps in burnout but I put the
taller flasks in the center of the oven and the shorter flasks around
the edge. I feel this produces a more uniform temperature in the
burnout oven.

I take the temperature up to 1320 degrees in 300 degrees per hour
steps and remain there for 5 to 8 hours. That amount of burnout time
works for me. When I cast very large flasks the temperature increase
per hour is slower due to the mass of investment in the oven.

I drop the temperature to 860 degrees for silver and let the flasks
cool for at least 1 hour before I pour the metal. This allows the
flask to stabilize at 860 degrees.

I melt in an electro melt furnace to a temperature of 1860. I
usually melt enough metal for several pours at a time and allow 5
minutes between pours to allow the temperature of the top edge of the
crucible to reach the correct temperature.

Without a lot of experience it is impossible to know, when torch
melting, the exact temperature of the molten metal.

My recommendation is to remain at the burn out temperature longer
and reduce the combination of metal and mold temperature when
pouring.

I agree with the idea that you are casting at too high a
temperature. I stay close to 1100 to 1150F.

Another problem may be your pre investment treating of the model. Are
you using a type of debubble-izer or surface tension release for
surface treatment? I have seen this type of surface problem when the
models are wet when they are invested. This will cause the
investment at the models surface to dilute and give you this type of
surface. Make sure the wax pattern is dry before investing.

Yes, everyone has given you good advice about lowering your mold
temps before casting. I just want to add that it IS correct to reach
a burn-out temp of 1250, and the reason is that this will properly
burn out the wax and all residue from the wax, as well. But this
temp has absolutely nothing to do with a correct casting temp. For
that you must reduce the temp and hold it for a while to let the mold
temp sink in all the way to the center before you cast. You are going
to have much better results now, following the advice you have
received.

I cast most of my silver at a 950 degree oven temp for larger rings,
I consider yours larger. There are so many possibilities that could
be wrong, maybe one or a little of all, try several flask at
different temps and mix the investment separately. My first thought
from the pictures is that you are not letting the flask dry enough,
give them at least 2 hours before putting them in the oven. Also I
know some believe that 1350 is to hot because of investment
breakdown, but I still go to 1350 for at least an hour, more time if
I am using carving wax or plastic. When you bring the oven down to
casting temp remember that the inside of the flask is still at the
higher temp, it takes hours for the inside of the flask to come down.
Don’t know which silver alloy you are using but most recommend using
at least 50% new with each cast. Last, are you weighing out your
investment and water or just winging it, and be sure to not have any
sharp edges when you sprue up the wax patterns. Think about the
silver flowing into the mold and hitting a thin sharp edge breaking
the investment off and flowing with the metal somewhere in the ring.
I usually tap my flask very lightly hole down before casting to get
out any loose investment, it’s amazing what sometimes comes out.

I’m curious as to why you choose to do 16 tiny pours instead of
combining many/all of these flasks into one or two larger flasks.
From a time perspective wouldn’t it be a significant advantage to
combine them? Also less waste of investment?

I’m always interested in why people use the processes they do - it
helps me understand the business better.