Magnificence Stellaire - a kinetic ring that represents a celestial system in motion. It was inspired by the immensity of the starry sky in the farthest reaches of the northern hemisphere. A sky that unifies us.

The central stone, a black opal, portrays the aurora borealis with colorful and turbulent wisps of air in the vibrant darkness of the night. The stone rotates 360 degrees. This system also consists of various elements, including eight white freshwater pearls which symbolize the lunar phases. On the sides of the ring, several golden drops shimmer tracing the magnificence of the Milky Way. It also features moonstones that epitomize the black holes of our universe. It represents not only the magnitude of the sky but also the importance of each different element of our system. A vast sky, which unites us all despite the great distances that separate us.

What makes a ring powerful? Is it the interplay of shifting light, the shadow and depth created through the unique combination of metallic, matched colors or is it the vintage surface that recall memories and projects this unmistakable power? I always have been inspired by the ancient art of jewelry, and more specially, the history of rings. My artistic interests have always been drawn to the personal relationship people have with the jewelry they wear. Sometimes, I had meticulous mechanisms that gave the stone set the freedom to follow the owner’s movements, reflecting them in many small, intricate ways. Each of my design represents a different thematic system, a mirror to multiple metaphors. 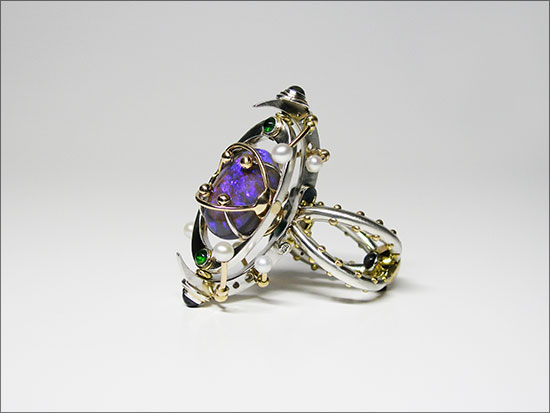