After poking at this project for the last year, I have finally sorted through my endless jar of gems and am looking for advice on my next step. Here’s how the story goes.

Many moons ago, a coworker came to me with a mason jar loaded to the lid with colored gemstones… He was one of those storage locker auction kinda fellas and this mason jar was one of his latest plunders. He said it was just a paperweight to him and sold me the jar for $100. It was a gamble for sure, but after taking them to a GIA cert. Gemologist, was relieved to discover that all of the gemstones were genuine and in relatively good condition for being stored in a glass jar like they were. So began the sorting…

Over the last 12 months or so, once or twice a week, I would sit down with a small handful and sort them into groups. First by type, then shape, then size. Setting aside gems with obvious chipping or scratch damage. As of last night, I have completed this phase of the project.

My eventual goal is to list them in small item lots on ETSY and start offloading them bit by bit. Being a jeweler myself, I have gone to Etsy many times to buy the oddball stone for a custom job, and I know people would buy them. It will take a while, but I believe I can get rid of most of them this way.

The part I am struggling with is making sure I identify them properly. I’ve been a Rockhound for 10+ years and a jeweler for 6, so Im pretty confident in my gemstone knowledge. However there is a solid %15 - %20 of the jar that I’m a little unsure about. It’s too many to take to an expert for identification, and too few to ignore. stones like amethyst, Garnet, sapphire, aqua, peridot, are easy and completed, but there’s foresty green, champagne yellow, and pink stones that I just can’t seem to indentify…

Does anyone here have ideas on how to finish identifying the remaining oddball gems, or other potential outlets for selling them? 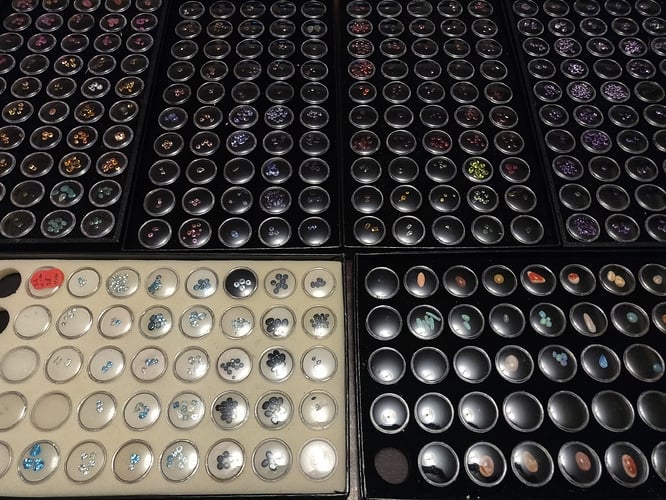 You can pick up a basic gem refractometer for about $100US. With that and a gem refractive index chart you should be able to identify everything in the collection. It might not be worth the investment, depending on how much you think you may be able to sell the unidentified material for.
If you don’t already know how, I’m sure someone at a local gem and mineral club can teach you how to use a refractometer.

Thanks, that’s a pretty good idea. I was just looking into those earlier today, ive seen some for +/- $100, and others for significantly more money. Is there a major difference in cheap ones and super expensive ones?

I don’t know. I’ve only used the desktop ones, and then only in gemology class. I imagine that the handheld ones are more convenient in the field, and the digital ones don’t make you read the scale yourself. I suppose that some will read a greater range of refractance than others, but the old-fashioned ones should be fine for simple gemological purposes.

Few comments for you and Jake…I’ve been a GIA cert Gemologist since '96, but IDK how anyone with any training told you all your hundreds of small stones are natural for sure…to do so one would have to test each stone, and in the case of the amethyst, it would require using a microscope (yes, you could use a loupe, but your eye would fall out using it on that many stones and you might have to look for very small inclusions you couldn’t see with 10X to distinguish between natural and synthetic amethyst) on each…and if there weren’t any visible inclusions, you couldn’t say whether natural or synthetic.

On the refractometer, the $100 ones work OK, usually. The best advice if you don’t use one every day is to buy the cheap one with a return privilege and test it out on a known quartz stone. Quartz has a pretty invariant RI, so if the refractometer doesn’t show it correctly, it is badly calibrated, so send it back and get another until you get one that reads correctly on quartz. However, an over the limit stone will have to be identified some other way…not much is over the limit and still natural outside of a few garnets and diamonds, so if you find some things over the limit, you can set those aside and take them to Gem ID day at the local gem and mineral society. You can get a digital “refractometer” but it is actually reading relative reflectance and may not be accurate enough for your purposes. Some folks swear by them, but I haven’t found them accurate the few times I used one. Poor polish, operator error or stones that are not clean enough will throw that machine off. There are no hand held refractometers for gems that I know of…the hand held ones are for determining sugar content of grapes and such, don’t read high enough to do gemstones and aren’t designed to use immersion fluid.

If your stones were larger, you could use specific gravity as a data point, but they look in the photo to all be around 3 cts or less, so the field method used for rough (with a carat scale and a small salad dressing cup of water) wouldn’t be accurate enough to work. Best you can do, without a lot of experience, is an RI and then a microscope to look at the inclusions. There are some sites on line with very good pix of inclusions. However, this is going to take you a long time and I’m not sure it is worth it, as it is very unlikely that you have anything that is very valuable. People don’t generally put natural sapphires, rubies, spinels, tourmalines, demantoids, etc., worth hundreds of dollars a carat in a mason jar with run of the mill amethyst, red garnet, peridot, etc.

One tip off to garden variety synthetic rough is that the color is usually very bright, brighter than all but the very best natural stones, without any brown or gray modifier and very saturated. If your unknowns look like this, odds are they are synthetic.

You could put a lot of your unspecified stones on ebay described as unknowns and see who is a treasure hunter. Since there’s one born every minute, you might get a few bucks a carat for them. There are also lapidary and faceting groups on FB and the internet and if you have good photos, you could post them and people could guess at the ID’s and advise you as to how to confirm.

Hope some of this helps. -royjohn

Jake…I got to thinking once I hit the send button and I should add that for faceted stones there is visual optics (developed by Scottish gemologist Alan Hodgkinson and popularized by W W Hanneman), which can be used for ID and uses no instruments, but it takes a good bit of time to learn. There are also gemstone magnetism tests (developed by Kirk Feral of www.gemstonemagnetism.com) which are easy to do and only require a standard magnet, a bowl of water and a little styrofoam boat. These will do some key separations, but, again, learning the tests takes time which a jeweler might rather spend making jewelry. You could also get a polariscope, a strainless sphere and a “quartz wedge substitute” and you could eventually identify any transparent gem by optic character and optic sign. You can find the procedure described on line in a Wikipedia article, or in Hanneman’s book, Affordable Gemology

, but I have never found anyone but me who was interested in learning it and it is, as the Brits say, a fiddly business. If you get into gemstone magnetism or optic figures, message me. I have surplus standard N-52 magnets and strainless spheres and probably some quartz wedge substitutes…don’t want to go on and on, but did think of these alternatives and wanted the archives to have the details…

I’m of no use whatsoever but just wanted to say what a wonderful problem to have!!! A jar full of genuine gemstones for $100 is my idea of heaven! I hope you manage to identify them all successfully. I’ll be looking out for a link to your Etsy shop when they go on sale.

Wow, your comments are exactly this kind of thing I was hoping for. A wealth of information indeed!
The visual optics was a great recommendation, and a subject I find to be incredibly fascinating. I have since gone headfirst into learning the technique. Last night I was able to view the spectrums of a few stones and put them into the proper gem capsules, they were relatively simple to discern (ruby/Garnet)

I have been scouring the web to find more images of gem spectrums so I can better categorize my stones, but I haven’t been able to find much yet. Maybe I’m not searching the correct terminology…
I understand how to decide if a gem is one thing or another, but I would like to be able to look at a gem and identify it more directly. For this I need images of spectrums for each type of gemstone.

Do you know where I might be able to find these images?

Reminds me of one of those buy a bag of gemstones from JTV, chock full of all sorts of semi-precious gemstones that look good from afar, but up close, are full of amateur cut and poorly polished stones. I think 3/4 of the bag was garbage cuts and would make good material for craft projects, but I would never put them into a real piece of jewelry I was creating. I gave some to my daughter’s art class to see if they could do something creative with them.

Royjohn gave you great advice. I found in my experience to pick up all the equipment you would need to do identification can get a little costly. I also found that the smaller the stone, the more likely there can be false positives. Also, specific gravity on a stone less than 1 to even 1/2 a carat is almost useless unless you have a high precision scale. A couple points off in grams or carats will throw your calculation off and on some gems the spread of S.G. isn’t very large.

Jake, I have been through the GIA program in Gemology and I would not just rely on the RI readings because, for example, if you have a real sapphire and a synthetic the only way to make the separation is under magnification. Do you know how to identify flux from whispy veils? I’m wondering if you could team up with a local Graduate Gemologist and maybe do some horse trading? If you’re near Seattle, let me know. Contact me through my Instagram page ellenlyonsjewelry

Hey! Sorry for the late reply, I’m just now seeing this and sent you a message on your instagram account. I look forward to hearing back from you.

Jake,
I’ve got your Instagram message. Why don’t you send me a message through my email:
info@ellenlyonsjewelry.com