Instead of an engraving ball

I recently had purchased a retire jeweler’s entire lot of gravers
and setting burrs for only $30. 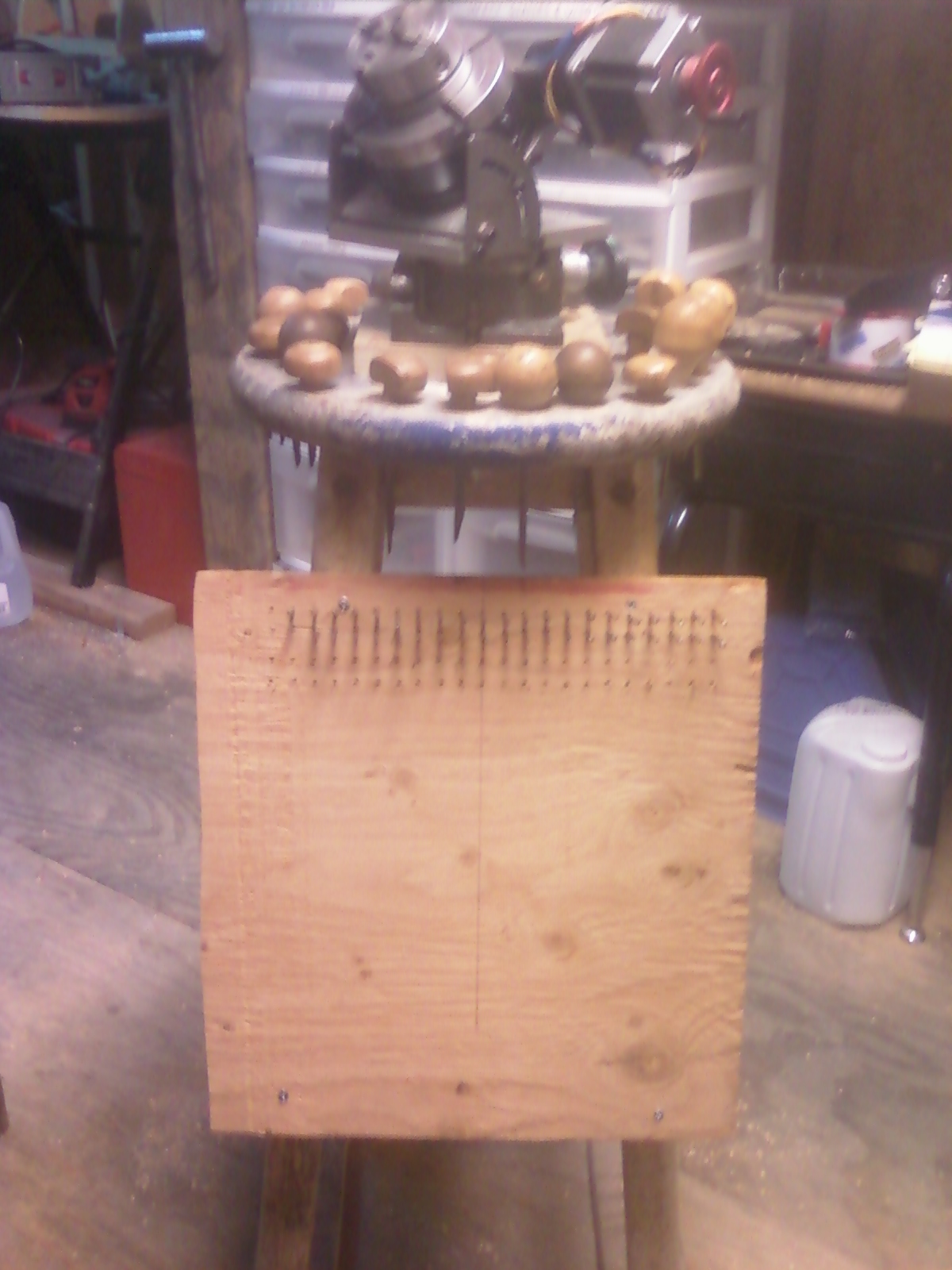 I had absolutely NO idea how I was going to store them all in an
organized fashion. And I misplaced one of the jaws for the engraving
ball vise someone gave me, I can eventually machine a new one, but
not now.

That said, I did have.

So, I cobbled together a three-dimension support apparatus where one
can more or less precisely select roll and yaw to within a degree,
and pitch reliably at 5 degree intervals give or take a degree.

The four jaws in the chuck can be set independently to hold any
irregularly shaped object. In theory I could use this apparatus to
hold a dop a flat lap for gem cutting, but I’d much rather have a
third rotary table if I was going to to that.

I found an old wooden stool I was not using, and thought it would
make a nice mount for the apparatus, especially if the stool was
secured to the floor to prevent vibrating.

Because the entire apparatus is supported by a vertical spacer, that
gave me a way of storing nearly my entire collection of gravers. I
used a 1/2 inch diameter paddle bit to drill 20 holes to places all
the graves around. That way, I could identify the gravers by tip and
pick what I wanted.

Next problem is the burs. Since an engraving setup is also the way
most jewelers set gems, I wanted to setting burs nearby. So I
mounted a board and drilled holes to store not only the setting burs
I had, but also nearly ever leftover needle file I had remaining.

I didn’t spend a year at Georgia Tech for nothing!!!
Andrew Jonathan Fine

I love it! When you said no engraving ball I thought you were still
usinga wood board to attach your work to.

I still use a simple block of chasers cement for most engraving, or
a shellac pad. There are many books out there with plans for making
your own engraving balls too: no need to worry about whether it’s x
or y: if it works for you, then great. Charles Lewton-Brain I believe
has plans for making your own engraver’s ball with less parts than
you mentioned having in his book/shareware,“Cheap thrills in the Tool
Shop” may be the Brain publication you can find it in. rer

My favorite saying by Albert Einstein is that things must be as
simple as possible but no simpler! Engraving is very specialized art
and just because someone owns gravers and uses them from time to time
does not mean that one is engraving.

If one breaks points, or slips often, or cannot achieve good cut,
and etc., large part of the solution is proper manipulation of
engraving ball, which must be of the highest obtainable quality.

A standard machined engravers ball can cost $500 and more. This version costs less than $30.00. Read on and find out why and what!

Engraving Ball: The owner (Michael Shwartz of Creative Metalworks) of
store/school where I help to teach made one from a duckpin bowling
ball.