How to tumble for smooth and shiny sterling silver

I’ve recently acquired my first rotary tumbler. I have used it for
sterling components patinated using liver of sulfur. The process I
have used is first to tumble for a couple of hours using blue or
green pyramids and a bit of deburring solution, then 20 minutes with
stainless shot and burnishing compound.

I now want to try it for the first time on non-patinated sterling
components. I would like to experiment with both shiny and satin
surfaces.

Can anyone describe a process for me to try? Do I still use the
abrasive media?

To get a satin finish in a tumbler, use the coarse abrasive medium
and see if that gives you what you want. If not, then go to the finer
medium and see how that does.

Check the parts and continue tumbling for a minute or two at a time
until you get the effect you want.

Marie - to get smooth shiny silver, you will need more than a rotary
tumbler. the last step using dry media simply doesn’t work in a
rotary tumbler. The media just slides.

Run work 30 minutes with steel and burnishing solution in a rotary.

For the cut down step, run work for 4 hours with a fine abrasive
with deburring compound in a vibratory tumbler, much longer in a
rotary. A flow thru tumbler gives much better results because the
stuff you cut off is removed as the process continues.

Run work again in steel for 30 minutes with burnishing compound in a
rotary.

The last process is to run for 24 to 48 hours with a dry media
either pre-charged (Green Buff) or charged with Simichrome in a
vibratory tumbler.

this yields a finish that is comparable with hand buffing and much
more even.

If you don’t run the last step with dry media, your only choice to
get a mirror shine is to polish with your buffing motor.

A bit of history about tumbling to get a shiny finish. Now don’t get
your panties in a twist about this, it is from wood cuts that I
gathered the history from around the 1400’s.

In Shakespeare’s time (remember I’m on stage telling history and
cracking jokes) When metal needed to be polished, it was either by
hand or the apprentices filled a barrel with dry sand, placed the
pieces in it (usually armor) and would roll the barrel back and forth
in the court yard all day long. Eventually the items would be nice
and shiny. I would go on about how my apprentice refused to roll the
barrel up and down our driveway. He would chime in (it was my hubby)
that he was an IBM VP and his job was to delegate. We would get
laughs and I was off to the next bit of history.

What would prompt the barrel discussion was how I could create all
the things I did without modern technology. Easy, since everything
but one (now two) item was the same as had been used since before
Christ. Just some little twists on the things like good springs and
such. But since my apprentice wouldn’t roll the barrel, he purchased
me a different barrel, and it fit on a small motorized base. It was a
rock tumbler, with stainless steel shot. IBM VP’s are good for
something.

Aggie on a rainy mountain top.

Years ago (1993?), when I was doing lots of shows and in a small
manufacturing mode, I sent a collection of pieces to Rio Grande and
asked them to recommend a mass finishing solution. They did and it
served me well. I no longer make the quantity of jewelry that I did
when I was doing shows, so I rarely use the tumbler. I am sure that
the good people at Rio would be happy to do this for you. My
solution was similar to that described by Judy Hoch, however, I
never have used shot. My solution was a flow thru (very important)
vibratory tumbler, two stages of ceramic media, and then a dry
charged media. I would run for as long as two days total with lots
of changes of the flow thru solution, and a good look over from time
to time. Different types of pieces finish quicker than others. I
would almost always run them over a rouge wheel for QC and
occasionally have to do a tripoli pass. Wash with ammonia and hot
water, dry and be done. I would like to try shot sometime, but have
not had a reason to. I suspect that it would allow me to finish much
quicker, but I work one piece at a time now. Forty years of
polishing has taken its toll on my hands, back, and is probably the
source of my deafness. Polishing by hand is, however, the best way
to get a good finish, at least for me. That’s my two cents. Good
luck. Rob 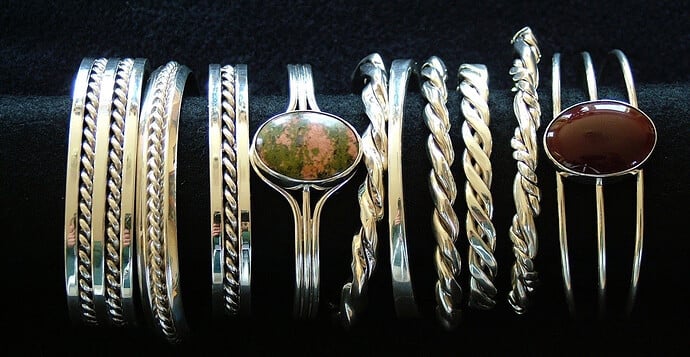